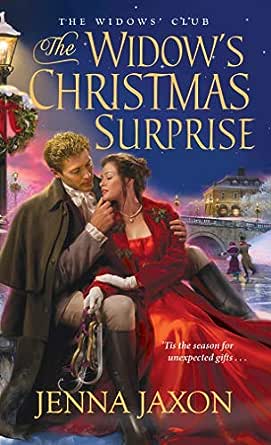 You've subscribed to The Widow's Club! We will preorder your items within 24 hours of when they become available. When new books are released, we'll charge your default payment method for the lowest price available during the pre-order period.
Update your device or payment method, cancel individual pre-orders or your subscription at
Your Memberships & Subscriptions
There was an error. We were unable to process your subscription due to an error. Please refresh and try again. 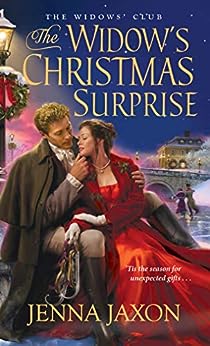 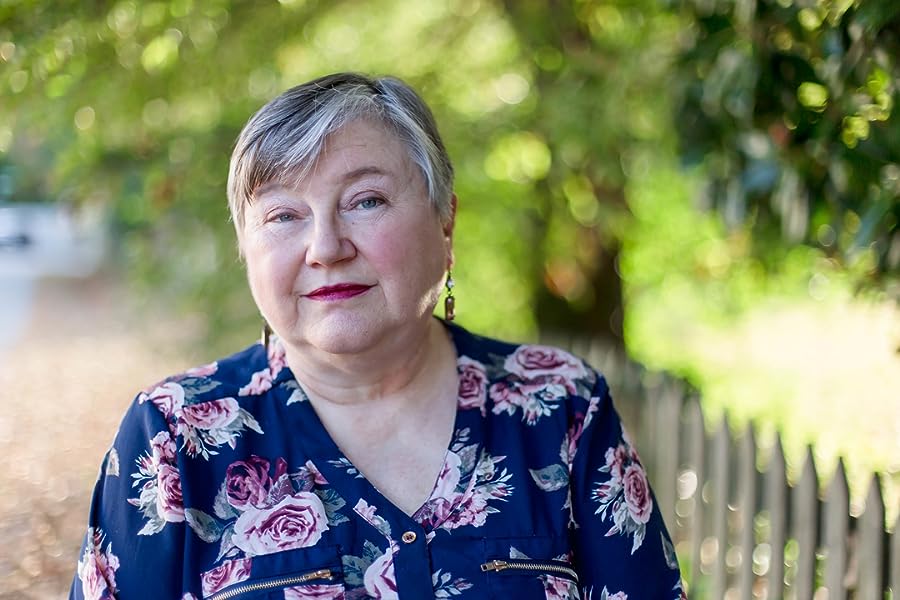 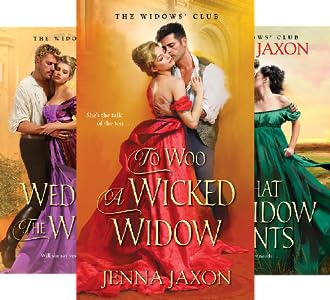 Jenna Jaxon is an accomplished author who wrote The House of Pleasure series as well as the historical romance trilogy Time Enough to Love. When not reading or writing, she indulges in her passion for the theater by working with local theaters as a director. She currently resides with her family and a small menagerie of pets in Virginia. For more information, visit jennajaxon.wordpress.com.

Anne Flosnik is an accomplished British actress with extensive experience on stage and television, with commercials, and with voiceover work and audiobook narration. The narrator of over 300 audiobook titles, she has received numerous awards and distinctions, including an American Library Association Special Services for Children Award, multiple Earphones Awards, and multiple Audie nominations. --This text refers to the audioCD edition.

3.7 out of 5 stars
3.7 out of 5
27 global ratings
How are ratings calculated?
To calculate the overall star rating and percentage breakdown by star, we don’t use a simple average. Instead, our system considers things like how recent a review is and if the reviewer bought the item on Amazon. It also analyzes reviews to verify trustworthiness.
Top reviews

PeggyC51
5.0 out of 5 stars Lovely Story
Reviewed in the United States on September 30, 2020
Maria doesn’t know what her future holds. He profligate husband is dead, killed in a duel. Maria is pregnant and soon gives birth to a beautiful daughter, not a son who could inherit his father’s title. While waiting for the appearance of the new earl, Maria seeks advice from and befriends her late husband’s estate manager. She and Hugh Granger soon fall in love. There are complications on both sides that make considering marriage difficult (to say the least). Can they resolve the issues that threaten to keep them apart?

This is quite an emotional story. Hugh and Maria find moments of happiness in the chaos of their lives. Maria married very young and is being forced to grow up fast. She faces an uncertain future, made even more so by the arrival of the new Earl’s family. The Earl is a petty, jealous, greedy man. His oldest son and heir is slime. Both are manipulative blackguards who would have Maria’s (and her daughter) inheritance. Hugh Granger is a wonderful hero - kind, caring, and protective. His future hangs in limbo, due to his brother’s attempted suicide. Hugh’s sister Arabella and Maria’s cousin Jane are delightful. Jane adds a dash of snarky humor a time or two. Gareth, Marquess of Kinellan is awesome at protecting the ladies. Sometimes happily ever after seems impossible, but Christmas miracles do happen. This is a good story. I recommend it.

I received an ARC of this book from the publisher via NetGalley. My review is voluntary.
Read more
One person found this helpful
Helpful
Comment Report abuse

Nicole
2.0 out of 5 stars not what I was expecting
Reviewed in the United States on October 7, 2020
Lady Maria Kersey has just given birth to a lovely baby girl but can’t celebrate much given her late husband’s scandalous death in a duel just a month prior. Since the estate is left without an heir, Maria’s future rests on the largesse of the new earl once he is located. Her late husband’s reputation has left her own name blackened by London society and Maria is left with few friends. One of the few who show her any concern is Hugh Granger, the estate’s steward with whom Maria would like to be much more than friends. If only the charming man weren’t penniless.

Hugh has long admired Maria and finds her irresistible, even though he can’t offer her a stable future. Distraught at the new earl’s underhanded behavior in covering up the discovery of her late husband’s will, Maria opts to spend Christmas in London with her cousin and friends, never expecting events to unfold that will secure the happiness that so eluded her in her two previous marriages.

Wow was this book not what I expected. [You may risk what some would consider spoilers from here, but I’ll try to refrain as much as I can in this thought session.] No light-hearted Christmassy romp here. We actually have some pretty heavy topics introduced a bit here, although they were handled well. Maria was the big issue for me. I’m not sure I’ve ever read a sillier, more immature heroine. Yes, I understand she was still very young, but after two marriages, one to a rakish philanderer, one would think she’d have developed a bit more understanding and lost some of her naivete, or at least grown a spine. Maria’s cousin Jane was even worse in her own way. As a widow Maria had no need of a chaperone or such strict control over her movements and yet Jane was constantly nagging her. Jane kept on and on complaining about delaying her trip to visit her own lover in Scotland, even after Maria had ceased asking her to stay. Jane was definitely part of the reason Maria was still so naïve and unable to stand up for herself; she kept Maria dependent, even telling Maria she was to young to hear the story of Hansel and Gretel. (I had hoped this was a joke but given Jane’s insistence on treating Maria like a recalcitrant child, I’m not so sure.) When Maria truly did need companionship to save her from unwanted advances, Jane wasn’t there, and Maria kept on making the same stupid decisions right up to the end.

My annoyance with Maria aside, the basic story here wasn’t bad, although the dialogues were a bit cumbersome. The romance here, as well as the characterization of Hugh and Maria, was rather flat. We didn’t get much in the way of time these two actually spent together so their relationship didn’t seem very believable or deep to me. I appreciated them standing up for themselves in the end, but even that didn’t seem to be a permanent change, especially on Maria’s part. Their intimacy was also lacking for me and Maria was rather aggressive with Hugh to the point that I felt sorry for him. Especially given her previous description of her physical reaction and attraction to another man, however unwanted, just undermined her feelings for Hugh for me and that connection was never really strengthened. The villain here was believable, if dumb, and got much further than he should have simply because Maria didn’t bother to think and make inquiries about her situation, and nor did her supposedly worldly cousin. I also found it a bit odd that Maria’s baby was only trotted out a couple of times and otherwise mostly forgotten, though I suppose this is understandable given Maria’s immaturity. I also wound up feeling sorry for Maria at how fickle her friends were in their failure to wholly believe her over a known villain. She certainly deserved better friends and family and I wound up being proud of Hugh for his treatment of his own family and for how he and Maria went after what they truly wanted.

This story was a bit slow for me and I struggled to maintain my interest. Given my failure to connect with the characters in this book and the two previous installments, I’m not sure if I’ll continue this series.

I voluntarily read and reviewed an advanced copy of this book. All thoughts and opinions are my own.
Read more
Helpful
Comment Report abuse

Marsha @ Keeper Bookshelf
VINE VOICE
4.0 out of 5 stars An intriguing Christmas-time Romance
Reviewed in the United States on November 13, 2020
The Widow’s Christmas Surprise was a story that, frankly, I wasn’t expecting from the title. And if like me, you were thinking of a lighthearted holiday romance – then no, that’s not what you’ll find with Maria and Hugh. There is darkness here, some heavy subjects even in the modern world that while providing an interesting backdrop to the romance still should have a bit of a warning attached (in my opinion). You will encounter conversations about suicide, violence, and definitely a cheating unfaithful husband who meets his end during a duel. And yes, he was indeed a nasty piece of work.

Although twice widowed, Maria is young and perhaps that explains why she so often seemed immature to me. As a widow, she should have known about several things that she seemed to have no clue about and her actions often took me away from truly being able to like or be on her side throughout this romance. I eventually liked Maria as she grew a bit through experience and Hugh’s presence, but I never felt like she deserved the man who loved her. And for that reaction, I am somewhat sorry, but nothing has changed my mind – not even a very satisfying ending.

Hugh had my attention and my heart from the very beginning. His devotion to Maria, even from afar and helping where he could, was precious to observe. Although he has his own troubles brewing his love for Maria never faltered. I liked Hugh, it’s just as simple as that.

I wish Maria’s daughter had made more appearances in this story. Perhaps seeing her cherish her little one, bond with her might have changed how I felt… but that happened only rarely.

I know it sounds like I hated this story which is far from the truth – I did enjoy The Widow’s Christmas Surprise, just not the way I expected to, and mostly through a few, select character’s actions. Not all Christmas centered Romances are going to be light and festive, some will be dark and brody and this was the case for me with Hugh and Maria’s tale.

*I received an e-ARC of this novel from the publisher, Kensington Books via NetGalley. That does not change what I think of this story. It is my choice to leave a review giving my personal opinion about this book.*
Read more
Helpful
Comment Report abuse
See all reviews