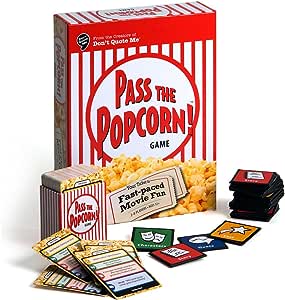 Add to Cart
$39.95
& FREE Shipping on eligible orders. Details
Sold by: Windy Castle
Have one to sell?
Sell on Amazon
Loading recommendations for you

Brand: Wiggles 3D
4.2 out of 5 stars 51 ratings
Amazon's Choice recommends highly rated and well-priced products.
Amazon's Choice for "pass the popcorn game"
Available at a lower price from other sellers that may not offer free Prime shipping.

The Pass the Popcorn Game is movie guessing mayhem. Shout it out. Be the First To Guess the Name of Famous Movies. You'll be given Cast Names, Character Names, The Story or a Famous Quote from the Movie. Every player has a set of tiles to complete. Turn over your tiles by naming the movie before any other player.

4.2 out of 5 stars
4.2 out of 5
51 global ratings
How are ratings calculated?
To calculate the overall star rating and percentage breakdown by star, we don’t use a simple average. Instead, our system considers things like how recent a review is and if the reviewer bought the item on Amazon. It also analyzes reviews to verify trustworthiness.
Top reviews

Amazon Customer
4.0 out of 5 stars Not for beginners
Reviewed in the United States on January 14, 2014
Verified Purchase
This game is hard. When playing, my family and I adjusted the rules, and I like our version better. For example, instead of only have two tiles and going back and forth until someone has all four, we just had each player start the game with four. Four of us played, so we took 16 of the tiles (four for each category), and mixed them, face down, in the center of the table. Then everyone drew. It was more fun that way because not everyone would end up with all four different categories. It all depended on which ones you just happened to draw.

But even then, the game is still very hard. You have to be up-to-date on movie trivia and easily know the plot, characters, and actors. Forget the quote. Those are so random and misplaced, we didn't know any of them. They seriously picked out the most obscure quote from every movie. Like for "Gone With the Wind," instead of going with Rhett's obvious line of "Frankly, my dear, I don't give a damn," they'd choose a quote from one character who had one line in one scene. Way too hard.

That being said, I had fun with the game, mainly because of the four of us, I watch and retain more movies than the others, so I excelled at this game! :D Get together with your movie buff friends and you'll have fun. This game is all about playing with the right people.

Bradley Schiermeyer
4.0 out of 5 stars Good game if you like movies.
Reviewed in the United States on January 17, 2014
Verified Purchase
My family and I love movies, so this was a great choice for a game. There are different ways to play it for different levels of difficulty, but I will explain the main one. Each player selects two clue category tiles from the face down pile. These indicate what clues you can guess from when read. Each time you win a round, you draw one more category tile from the pile. To win a round you must guess a movie correctly for each of your tiles that you drew, and to win the game you must have four tiles and guess correctly for each tile. The clue categories are Cast, Characters, Story, and Quote.

The compact size would make it great for a long family trip in the car or pretty much any where. The different ways to play will help a little with longevity but you will could end up going through the cards pretty quickly. Once you know every card, how fun can a game really be?

The bonus Star Connection game is a fun "pass the time" kind of game. Each player is dealt 5 cards with Actors names on them. Another card is placed face up next to the deck. To play a card, you must be able to connect the Actor on your card to the actor on the card face up in the discard pile. Think Six Degrees of Bacon meets Uno.

Overall it is a fun game with lots of laughs. I would recommend this game to any movie lover.
Read more
Helpful
Comment Report abuse

Sands
5.0 out of 5 stars Love this game
Reviewed in the United States on February 17, 2020
Verified Purchase
If you like movies you will love this game!
Read more
Helpful
Comment Report abuse

Amazon Customer
1.0 out of 5 stars Not a great buy
Reviewed in the United States on December 28, 2018
Verified Purchase
Instructions were totally confusing and no one ended up playing
Read more
Helpful
Comment Report abuse

S. Brumley
5.0 out of 5 stars Great For Family Night
Reviewed in the United States on December 31, 2014
Verified Purchase
We've had this game for quite a while now and the boys still enjoy playing. If you have a movie enthusiast in your home, they'll love to Pass the Popcorn.
Read more
Helpful
Comment Report abuse

April Massie
4.0 out of 5 stars Great fun for movie lovers!
Reviewed in the United States on January 9, 2012
Verified Purchase
If you watch a lot of movies, this is a great game for you. It actually comes with two different games. I've only played one so far, but we had a great time with it. The only issue I could possibly see is that you could get through the deck of cards within 2-3 games so I'm wondering if they sell refill packs. But yes - much fun for movie lovers. :)
Read more
2 people found this helpful
Helpful
Comment Report abuse
See all reviews

Page 1 of 1 Start overPage 1 of 1
This shopping feature will continue to load items when the Enter key is pressed. In order to navigate out of this carousel please use your heading shortcut key to navigate to the next or previous heading.
Back
Next
Pages with related products. See and discover other items: family trivia games, guessing games for families, sleepover games, sleepover party, the office trivia, games and trivia