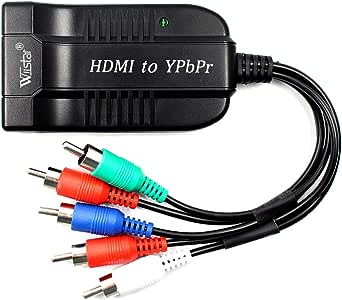 Visit the Wiistar Store
3.4 out of 5 stars 70 ratings
| 7 answered questions
Currently unavailable.
We don't know when or if this item will be back in stock.

Introduction
This Wiistar converter is a HDMI to component (YPbPr-Male) video converter that allows modern home theater to be integrated seamlessly into the older analog devices and digital audio .This adapter connects HDMI video home theater devices to component and digital signal. With the HDMI to Component+Digital Audio Adapter legacy home theater devices can be easily connected any YPbPr display for the full digital video and audio experience.It fit for TVBOX,VHS,VCR,DVD recorders, etc

Notice:
1.This item does not have the downscaler function. If your component video device does not support 720 or 1080, then you need to adjust the input HDMI signal to 480 or 576 resolution. As some component video device may be old,only support 480 or 576 resolution formats. And this product is BYPASS, which means that the output signal depends on the input signal.
2.Your TV support 1080p or not,we can not promise,so if you need output 1080p resolution,Please confirm your input deivce support 1080p,1080i,and so on.
3.Some new TV can support up to 1080P50,but according to the YPBPR ruler,actually,it can only up to 1080i,so please try to set the right resolution.
4.Must use the micro cable to connect power.
5.This item is not compatible with some Sony TVs, Blackmagic products etc: Because the resolution frame rate of this product does not support 23.98, 29.97, 59.94. If it not work with your monitors, please check and set the resolution of your TV.

3.4 out of 5 stars
3.4 out of 5
70 global ratings
How are ratings calculated?
To calculate the overall star rating and percentage breakdown by star, we don’t use a simple average. Instead, our system considers things like how recent a review is and if the reviewer bought the item on Amazon. It also analyzes reviews to verify trustworthiness.

Mark U.
3.0 out of 5 stars Good enough, with caveats
Reviewed in the United States on December 10, 2016
Verified Purchase
As I write this, there are only three reviews posted for this product, mine being the fourth. Two of these say the product does not work. I do not own every TV known to man, but I do own two TVs and can testify that this converter worked, no fiddling or kinda-sorta, on both. That said, there is a caveat or two that led me to return this.

The good
As stated in my intro, I plugged everything in and it worked. I've had a little experience with HDMI splitters and converters for other uses, most of which are commodity no-name Asian-manufactured mysteries kind of like this thing, and my success rate with them is near zero. So my expectations were low, and pleasantly exceeded. With everything hooked up, I changed the TV to the component input and there was picture and sound. No hesitation, no artifacts, no blinking while the adapter did something -- it effectively just worked.

The bad
Here come the caveats. Sound, for one. It comes out of this converter at noticeably lower volume than the source is passing in. You won't have to max out your TV volume to hear or anything, but you will have to turn it up. If you never change inputs this is probably not a big deal, but if you do, then you're going to wind up having to adjust the volume every time you change away and then back. Also, and I think worse, I'm fairly sure the adapter isn't extracting stereo audio from the input. Since it is only outputting RCA L-R, obviously it can't pass through true multichannel (e.g. 5.1) from the HDMI input, but I would think stereo is available. It didn't sound the converter was extracting it, though, and either way the sound was kind of flat and just a bit muddy. If you're hooking a Blu-ray or even a regular DVD player to this, don't expect to get cinema sound out of it.

Picture is a second caveat. I went back and forth between the component output of this converter and a true HDMI, and I ended up feeling as though the image was a tad softer and more washed out via the converter. Of course, you would expect this as composite is technically worse than HDMI for images, but the vast majority of people (including me) would never really know under ideal conditions. It may have been my head playing tricks on me since I knew the converter was there, but the picture just didn't look quite as good. Not bad by any stretch; just not quite as good. I want to stress, though, that unlike some other reviewers, I saw no artifacts, lines, blinking, or anything of the sort. Questions about picture quality aside, functionally it was like the converter wasn't even there.

The "meh"
The converter comes with a short USB cable for power. Most TVs have a USB port and so you can just plug the cord into that to power the converter. I actually like this, as so many converters of this type require AC power and have a power brick you have to plug in somewhere. This is a very compact solution. I've put this comment in the "meh" section because (1) the instructions don't actually tell you what the USB cable is for; and (2) mine worked with and without the cable plugged in, so I have no idea how necessary it really is.

Overall
I returned this converter due to my caveats about picture and sound. This is because the component input I was connecting this to is to be my main source of TV watching, and so I want those things to be as good as possible. If this were for more occasional use, or on a secondary TV, I would not have hesitated to keep it. I found it to be absolutely appropriate for those uses, especially at the price. That earns it a three-star rating from me.

Dennis W. Higham
1.0 out of 5 stars basically I wasted my money
Reviewed in the United States on September 6, 2017
Verified Purchase
Switched from DTV to Xfinity and wanted to be able to use the component video to continue to watch TV and listen to music at the same time. Could not get this adapter to work and had to hire GEEK Squad to look at new Xfinity box and this adapter. GEEK Squad said it was not sending the correct authentication signal and would not work, basically I wasted my money. Should have known better from all the grammatical errors in their description.
Read more
3 people found this helpful
Helpful
Comment Report abuse

Randy Sine
4.0 out of 5 stars Works fine
Reviewed in the United States on January 29, 2018
Verified Purchase
The product works fine and as advertised. The instructions for hooking up the power supply aren't clear so I didn't give it 5 stars. Thanks to the other reviewers for a heads up on this. In return I'll give a heads up to others: When I first hooked it up the display on the tv was scrambled. I realized the output from the Blu-ray was 1080p, but the tv was 1080i. Fortunately I had other tvs that were 1080p so I took the Blu-ray player to another tv and changed the settings on the player to output 1080i. Then once I hooked it up on the original tv the display was fine.
Read more
3 people found this helpful
Helpful
Comment Report abuse

Paul Tower
1.0 out of 5 stars Does not work with (ROKU) Stick.
Reviewed in the United States on January 17, 2019
Verified Purchase
Does not work with a (Roku) stick with or without external power. Will work with some HDMI applications, but lacks in documentation. Returned for credit since it worked for a few seconds and then blanked out - not to be trusted.
Read more
One person found this helpful
Helpful
Comment Report abuse

steubenvillian
3.0 out of 5 stars Supports DHCP 1.4 not 2.2
Reviewed in the United States on May 11, 2018
Verified Purchase
Delivery was great but when I connected this device to my new Roku Ultra streaming box it said that this adapter only supported DHCP 1.4 where modern requirements were 2.2. I was unable to find any other hdmi to component video adapter that supported above 1.3 or 1.4 so I haveto return this device and buy a new TV set.
Read more
Helpful
Comment Report abuse

Sam MT
5.0 out of 5 stars Works great!
Reviewed in the United States on April 25, 2017
Verified Purchase
Using device from a TiVo bolt to a video component HD modulator to broadcast to all the TVs in the house. Passes 720p 60fps fine, 1080p is a little choppy at 60fps on the refresh rate (could be due to the modulator) but 720p is perfect and that's all I needed for. Purchasing another
Read more
One person found this helpful
Helpful
Comment Report abuse

Nia Wills
5.0 out of 5 stars Amazing!
Reviewed in the United States on September 9, 2018
Verified Purchase
The HDMI port broke on my 2010 plasma tv. I was not able to use my firestick. I did NOT want to have to buy a new tv. Thank goodness for this device. I was able to connect my firestick to my tv again and it works perfectly.
Read more
One person found this helpful
Helpful
Comment Report abuse

Denis A.
5.0 out of 5 stars Worked like a charm!
Reviewed in the United States on July 4, 2018
Verified Purchase
Worked like a charm! Had a device that output signal to hdmi and my old tv only has component input. This device worked great! Just plugged in to the hdmi cable and plugged a male - male component wire into this adapter and voila, perfect signal.
Read more
Helpful
Comment Report abuse
See all reviews

Client d'Amazon
4.0 out of 5 stars Try a few resolutions to make it work
Reviewed in Canada on April 23, 2020
Verified Purchase
The product worked properly after tested a few different resolutions. (Resolution can be changed by pressing a very tiny button on the side of the box). Not the highest quality connectors but the image is good and it finally worked well.
It needs to be powered on with a USB 5V supply. It comes with the power cable but not the USB AC adaptor.
I was finally able to watch HD images from a wi-fi TV receiver on my old TV having only components input.

Cee Dee
4.0 out of 5 stars Need to change description.
Reviewed in Canada on October 22, 2020
Verified Purchase
Looks like a well made piece of kit, BUT Info needs updating on Amazon page to state that it is one way only. This info is in the packaging however it's not on the Amazon page!
Read more
Report abuse