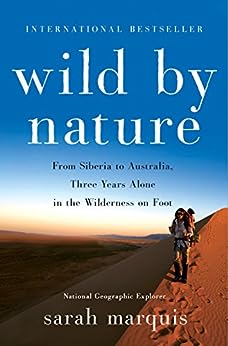 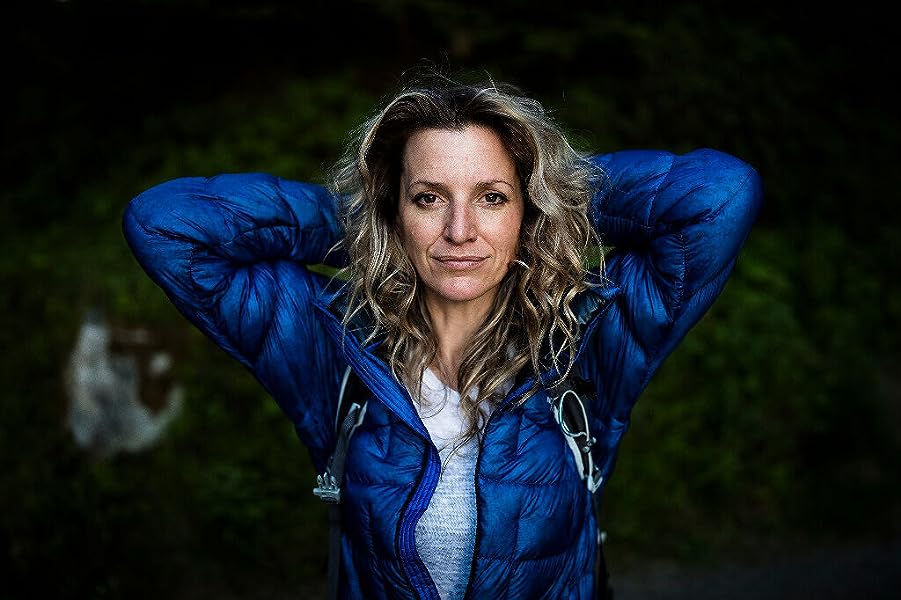 Wild by Nature: From Siberia to Australia, Three Years Alone in the Wilderness on Foot Kindle Edition

"A vibrant epic, this wondrous book is, at its core, a story of resilience. Marquis is industrious, and I recommend this book to all people seeking to discover the massive magnitude of their own potential power. A triumph!" -Aspen Matis, author of Girl in the Woods: A Memoir

"Destined to become a classic in the travel writing genre. The descriptions of time and place are just detailed enough to become animated with life, and the author's courage is inspiring." -Library Journal (starred review)

"Tough women explore the great outdoors alone: But while Strayed (author of Wild) is an amateur hiker, Marquis is a pro." -Entertainment Weekly

"Straightforward and forthright, this is adventure writing as it was meant to be." -Booklist

“A National Geographic Explorer of the Year in 2014 recounts her journey with the clear-eyed resolve and keen observational skills that make her a successful solo trekker.” ―Book Page

National Geographic Explorer Sarah Marquis has been profiled in The New York Times Magazine and National Geographic. During the last twenty-three years, Marquis circumnavigated the globe on foot once and then stopped counting. She’s been covered for solo expeditions in many countries, such as Australia and South America, and her first long walk was the famous Pacific Crest Trail in the United States. --This text refers to an alternate kindle_edition edition.

4.0 out of 5 stars
4 out of 5
180 global ratings
How are ratings calculated?
To calculate the overall star rating and percentage breakdown by star, we don’t use a simple average. Instead, our system considers things like how recent a review is and if the reviewer bought the item on Amazon. It also analyzes reviews to verify trustworthiness.
Top reviews

A. Huntz
3.0 out of 5 stars Not What I Was Expecting
Reviewed in the United States on May 21, 2016
Verified Purchase
I'm a travel reader, but was expecting something else when I picked up this book. I didn't know Sarah is a professional adventurer. Book sounded like my type of reading so downloaded it. Didn't know she has fully supported resupply points, in country POCs, support team and public affairs officials replete with helicopters! When a medical issue came up she was medivaced to Japan. Some of the tales were fun and others enlightening, but there were too many safety nets to keep any real since of adventure or suspense. Although an epic journey the tale was rather plain.
Read more
22 people found this helpful
Helpful
Report abuse

Ashley M
4.0 out of 5 stars Give it time to get going.
Reviewed in the United States on July 8, 2018
Verified Purchase
I thought I was adventurous. I still do. Sarah is CRAZY. She talks about being surrounded at night by nomads who don’t speak her language, threatened by Chinese government officials and Lao drug traffickers, burying herself in sand so she (hopefully) doesn’t get struck by lightning in the middle of the desert, sleeping in a tent when it’s -49° F, buying firecrackers because the packs of wolves are “more determined” in the winter, and the list goes on. Like I said... CRAZY.

That said, it was a surprisingly slow read because I had trouble getting into it the first time around. The receipt I was using as a bookmark is from March 2016, stuck on page 112 until July 2018. I like to finish every book I start, so I picked it back up again, continuing instead of restarting it. I think it was so hard to get lost in at first because I couldn’t stop thinking about how reckless she was often being, instead of being inspired to go on my own adventure. However, when I did pick it back up again, I flew through it, the last 140 pages in 2 days. She’s a great story teller, even if the stories she tells makes my brother repeatedly tell me they must be fiction, and make me scratch my head at how crazy she is. But good for her!

RMontgomery
1.0 out of 5 stars Misleading title, self serving propaganda
Reviewed in the United States on September 18, 2016
Verified Purchase
My husband referred me to this book as I enjoy non-fiction adventure books. This is not one. It is a disjointed stream of conscientiousness that focuses on random facets of her trip and leaves out the meat of the story. What'd you pack? How'd you feed yourself? How'd you feel at the end of most days? How'd you occupy your mind? What did the scenery look like? Whole regions are glossed over with little to no details and we're supposed to have empathy for "battles" we never heard about. I forced myself to keep reading but half way through Australia when the book became vegetarian propaganda, I called it quits.
Read more
19 people found this helpful
Helpful
Report abuse

jreeves
5.0 out of 5 stars Seriously loved it
Reviewed in the United States on February 23, 2020
Verified Purchase
I love to read books about women hiking in extreme situations. This did not disappoint. One of the take aways for me is her gratitude for the positive aspects of her journey. A simple 'thank you, thank you' s sprinkled throughout the book - this says it all. Things could have gone really, really south on numerous occasions but luckily, she came out in one piece. I love her spirit and her love of nature. I hope to meet her someday. I'm going to research now and see if she's written any more books.
Read more
Helpful
Report abuse

J. Tierney
3.0 out of 5 stars Good walker! Mediocre writer
Reviewed in the United States on August 24, 2020
Verified Purchase
The book is thin on descriptive language and internal dialog. Could be that because she's done this so many times, she is not experiencing the journey with fresh eyes. There's one transcendent episode in Mongolia, but most of the journey has no "beginner's mind" with which you can share the experience. Props to her for such an accomplishment. I'd like to suggest she should journal more along the way, but frankly, she was probably just exhausted from just walking and surviving.
Read more
Helpful
Report abuse

Katherine McCormick
3.0 out of 5 stars I could have skipped this one
Reviewed in the United States on February 2, 2017
Verified Purchase
Not what I'd hoped for in a good read. I didn't feel that the book was well written, kind of disjointed. If she had written more about her actual every day experience, and less of her philosophy on life, I would have enjoyed it more.
Read more
7 people found this helpful
Helpful
Report abuse

Danver Mishtannoc
1.0 out of 5 stars NatGeo Should Fire This Clown
Reviewed in the United States on December 28, 2017
Verified Purchase
I had this book sitting in my cart for over six months, waiting for a time when I could sit down to read it without distraction. What a total waste of money and time.

I've restarted the book three times, thinking that on the first two my mood just wasn't conducive to the topic. But it's not that. It's that Sarah is a terrible author, annoyingly smug in her presentation of herself and clearly lacking a grasp of focus. The title really says it all: "Check how how awesome I am!" when I was expecting something along the lines of "Let me share my adventure with you." It's not surprising she mugs on TED talks and has the usual Gaia-focused attitude.

I suggest you stick with proper adventure books from real adventuresome people like "Will to Live" by Les Stroud, "Alone" by Adm. Byrd or even "The Meadow" by James Galvin. I wish I could get my money back.

Mrs C
2.0 out of 5 stars Meh!
Reviewed in the United Kingdom on April 2, 2016
Verified Purchase
I've read a good few books about people who pushed themselves outside of the comfort zone and trekked or attempted a huge physical undertaking. But this one just seems to fall flat. The writer does show us the practical aspects of preparing for such a trip, but she seems to gloss over and often does not even begin to describe her experience in any kind of emotional context. You certainly do not get a sense of how she felt. The snippets are brief and barely scratch the surface. I was bored and not particularly inspired to finish the book. Considering that I paid a lot for this book, I was expecting a great deal more. Certainly more of a story.... really disappointed.
Aside note: this is more a review of my experience. The writing is good, but I didn't feel like I connected in any way with the writer. And I am not actually sure what the point of this book is.

Amazon Customer
5.0 out of 5 stars Good book
Reviewed in the United Kingdom on January 25, 2020
Verified Purchase
Bought for my daughter for college, as described
Read more
One person found this helpful
Report abuse

R. Rizvi
4.0 out of 5 stars Inspiring and captivating
Reviewed in the United Kingdom on December 7, 2018
Verified Purchase
And inspiring and captivating read. I've slowly been reading this for almost a year, almost exclusively before or during my own travels.
Read more
One person found this helpful
Report abuse

Mrs Jacqueline A Eke
5.0 out of 5 stars inspiring
Reviewed in the United Kingdom on September 2, 2019
Verified Purchase
Loved it, trying to find another one not in French.
Read more
Report abuse

jenny stone
1.0 out of 5 stars Badly written
Reviewed in the United Kingdom on February 17, 2018
Verified Purchase
Interesting subject but the book is made boring by being badly written
Read more
One person found this helpful
Report abuse
See all reviews

Tags that will help you discover similar books. 10 tags
adventureasiaeditors' picktravelwriting, research & publishing guideswomenbiographies & memoirsspecialty travelwritingtravelers & explorers
Results for:
Page 1 of 1Start overPage 1 of 1
Previous page
Next page
Where do clickable book tags come from?
Book tags are created from a variety of sources, some of which are customer-generated. Amazon is not legally responsible for the accuracy of the tags represented. If you are an author or publisher and would like to remove a tag associated with your title, please contact your vendor manager or publisher support team.