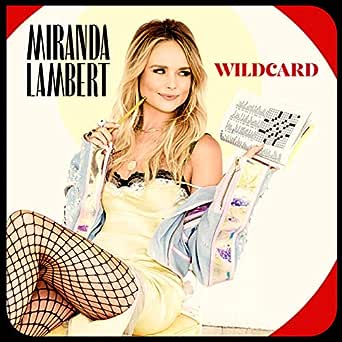 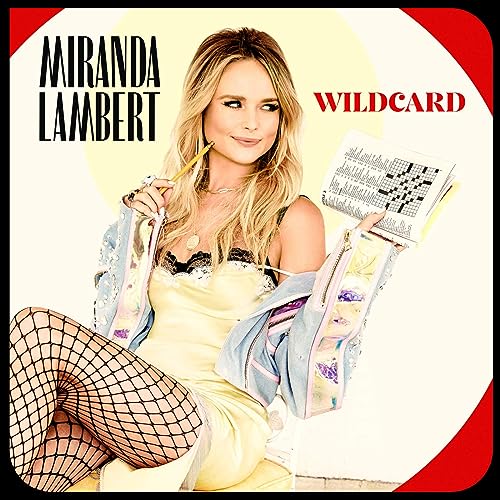 Miranda Lambert
November 1, 2019
4.8 out of 5 stars 2,135 ratings
See all 4 formats and editions Hide other formats and editions
Buy the CD album for $10.59 and get the MP3 version for FREE.&nbspCD album ships from and sold by Amazon.com. Terms and Conditions. Does not apply to gift orders. Complete your purchase of the CD album to save the MP3 version to your Music Library.

Listen Now
Buy MP3 Album $11.99
Your Amazon Music account is currently associated with a different marketplace. To enjoy Prime Music, go to Your Music Library and transfer your account to Amazon.com (US).

4.8 out of 5 stars
4.8 out of 5
2,135 global ratings
How are ratings calculated?
To calculate the overall star rating and percentage breakdown by star, we don’t use a simple average. Instead, our system considers things like how recent a review is and if the reviewer bought the item on Amazon. It also analyzes reviews to verify trustworthiness.

APR
2.0 out of 5 stars Maren or Miranda
Reviewed in the United States on November 3, 2019
Verified Purchase
Beautiful artwork. I've been a ML fan forever so don't just assume I only bought this album to talk unkind about it. I usually love all ML songs and albums from start to finish. I'm a little confused I understand and respect that artists try new things and explore with different sounds but their is to much going on here the beats drown out her voice the twang in it is hardly recognizable and unsettling. I was confused I thought this was a Maren Morris album?! The new sound of the beats sound to much like a pop album. I've always rooted and loved ML albums and I'm so disappointed I waited this long for her album their are only ones that are truly her the music I fell in love with from the start these are the only tracks worth listening to
1. Way Too Pretty For Prison
2. Locomotive
3. Bluebird
4. Tequila Does
5. It All Comes Out In The Wash
The rest of the album is very disappointing and unoriginal for her to produce don't like this new sound and direction at all.

BeautyBird
5.0 out of 5 stars WOW - Miranda at Her Best
Reviewed in the United States on November 2, 2019
Verified Purchase
Miranda Lambert has to be one the most talented people in music; not just country, but ALL music. Every damn song on this album is phenomenal. Every. Damn. One. Not "just OK," not "good," but freakin' EXCELLENT. In my opinion, Miranda has never put out a bad album, but I am just blown away by how perfect, well-written, well thought out, fun, feeling, and delightful this album is. This is a change of pace from Weight of These Wings, which was more introspective and had some sad moments. This album is more upbeat and fun, without being frivolous. The lyrics and the choices she makes are intelligent and clever. Trust me, whether you're a die hard Miranda fan or if this is the first time you're giving her a try... this is going to be one of your favorite albums of the decade.
Read more
27 people found this helpful
Helpful
Report abuse

K. J. B
5.0 out of 5 stars Country-Rock Done Right!
Reviewed in the United States on November 9, 2019
Verified Purchase
Miranda is one of the few artists that understands what it means to make an album. The album concept has mostly gone out the window with today's artists putting their attention to making radio-friendly singles instead of releasing an album of songs around a certain theme. Miranda has made an album with quality songwriting and country-rock production that centers around the theme of "Wildcard" which in her case means "own the skin you're in" and that is certainly what she is doing with this album. This album is a perfect snapshot of her current life.

With my review, I will focus on my favorite songs. The album starts off with "White Trash", a song that talks about her pride in being country, which combines country and experimental rock to make it very interesting sound. "Settling Down" is one of my favorites because she sings about whether she should 'saddle up or settle down' when it comes to deciding if she stay single or get married as it is a question I am wrestling with myself. The line 'I'm a little wild child and a homing pigeon' hits home for me. "Holy Water" has southern gospel written all over it, but Miranda takes aim at those false prophets that uses the word of God for all the wrong reasons. "Way Too Pretty for Prison" is hilarious as two women question if they should kill a cheating man or let someone do it for them because they are too pretty for prison. "Bluebird" is my most favorite song as she sings about learning from hard lessons, staying positive, and moving on to her next adventure. Other semi favorites are "Fire Escape", "How Dare You Love", "Pretty Bitchin", and "Tequila Does".

Now some 'country purists' will claim that this album is not country. Never mind the fact, that most of the giants in country music (even the father of country music, Jimmie Rodgers) also experimented with different sounds and sang different genres to keep country music fresh. The great Willie Nelson once even recorded an album of pop standards. The great Emmylou Harris once stressed while it is important to keep the roots of country music alive, she doesn't want country music to stay stuck in one place. She wanted country music to evolve in order to survive. So when I hear country fans question the direction of this album, it tells me not only do they not understand country music but they do not know the history of it. So, I say this to tell Miranda, you're doing a great job and to stay true to yourself.

J. Romano
5.0 out of 5 stars A Wild One!
Reviewed in the United States on November 5, 2019
Verified Purchase
Love this album-definitely Miranda's best! A solid set of catchy, fun songs. Highlights include "It All Comes Out In The Wash", "Way Too Pretty For Prison", "Pretty Bitchin'", "Tequila Does", and the best one of all: "Locomotive" which sounds just like its title, loud and fast!

Download the recently released but not on the album "Fooled Around and Fell In Love" and add it on the end of this album to make it Five stars++++.

Wendi Dreher
4.0 out of 5 stars watch for damaged CDs
Reviewed in the United States on November 2, 2019
Verified Purchase
Love the CD, but it came with a cracked and broken cd case. For a brand new purchase, I am not impressed.
Read more
9 people found this helpful
Helpful
Report abuse

EastonFour
5.0 out of 5 stars Lucky #7
Reviewed in the United States on November 2, 2019
Verified Purchase
This is definitely her Lucky #7 - I love all of what this encompasses. Miranda Lambert has come full circle and created a lyrical/life masterpiece of her own. She is such a well rounded artist and person. Love love love this album. 🎰💜
Read more
8 people found this helpful
Helpful
Report abuse

HenDog
5.0 out of 5 stars Wildcard
Reviewed in the United States on November 1, 2019
Verified Purchase
Awesome Album! So good! Definitely recommend picking up one of best albums of 2019
Read more
7 people found this helpful
Helpful
Report abuse

Sarah Sheetz
3.0 out of 5 stars Skipping songs
Reviewed in the United States on November 1, 2019
Verified Purchase
Ordered digital download and I am so disappointed with the quality of the download. Songs are skipping through out the whole album. The music is 5 stars but I cant give all 5 to amazon music.
Read more
6 people found this helpful
Helpful
Report abuse
See all reviews

Carol R
5.0 out of 5 stars Amazing album, Miranda is back on top!!
Reviewed in the United Kingdom on December 21, 2019
Verified Purchase
I’ve been a fan of Miranda Lambert for many years now. I was eagerly waiting for this release and I was not disappointed. All Comes Out in the Wash is Miranda back to her best. Check out the video - if you love 4x4’s like me, you’ll love it!! Stand out tracks are Way Too Pretty for Prison (lyrics are hilarious), How Dare You Love (written with her Pistol Annies bandmate Ashley Monroe) & Fire Escape (what a beautiful chorus). I love all Miranda’s albums, but this latest one has to be amongst her best. Cannot stop playing it. Miranda is the best country female singer of today!! Cannot recommend this album mote highly. If you live country music then buy this and you won’t be disappointed.
Read more
4 people found this helpful
Report abuse

Ramses
5.0 out of 5 stars continuing the perfect string
Reviewed in the United Kingdom on November 17, 2019
Verified Purchase
I am not a die hard country fan but for some reason I love Miranda Lambert. Not only because of her looks :) Her voice is very special and she can definitely write great songs and play guitar. I cannot find any bad one along her albums and this one is an immediate hit with lots of catchy songs in various styles, country of course plus rock, even gospel. Pity she does not come to Europe (that I know of), because I d love to her in concert. She is perfect.
Read more
3 people found this helpful
Report abuse

Musicfan
4.0 out of 5 stars one of her better albums.
Reviewed in the United Kingdom on January 6, 2020
Verified Purchase
I am not this singers biggest fan. I like some of what she does but a fair bit of what she does just doesn't do anything for me. I can take or leave her. I thought her last CD Weight Of These Wings was her strongest album release and the one | enjoyed the most and it was a double CD. Could she follow that one? The answer is 'yes' she can. It is an album of variety with rock, country, slow, fast and fun songs. Some weaker moments but none to be skipped over. Some strong moments and perhaps more than on most of her albums. This is one of her better albums. Enjoyable.
Read more
3 people found this helpful
Report abuse

Cláudia
5.0 out of 5 stars Love it!
Reviewed in the United Kingdom on November 8, 2019
Verified Purchase
This album is amazing from start to finish. From rocker songs to gorgeous ballads, this album has it all. I'm totally in love with it.

And it was delivered right on schedule.

Amazoner
5.0 out of 5 stars A terrific album that grows on you with each listen
Reviewed in the United Kingdom on November 26, 2019
Verified Purchase
I heard "It all comes out in the wash" on the CMA2019 tv show and was immediately hooked by the catchy refrain. I then explored other tracks and liked them so much that I bought the CD and am delighted with it. Every listen reveals another stunning track. Fabulous.
Read more
One person found this helpful
Report abuse
See all reviews