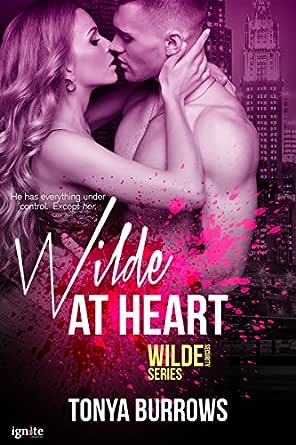 You've subscribed to Wilde Security! We will preorder your items within 24 hours of when they become available. When new books are released, we'll charge your default payment method for the lowest price available during the pre-order period.
Update your device or payment method, cancel individual pre-orders or your subscription at
Your Memberships & Subscriptions 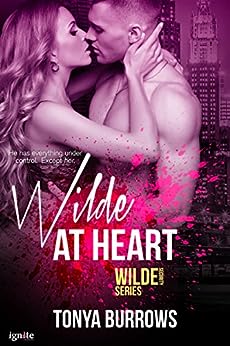 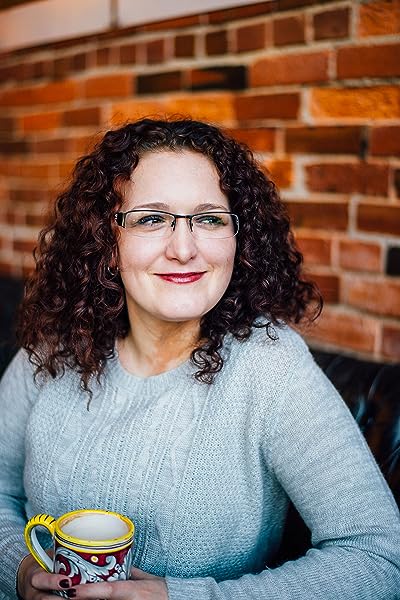 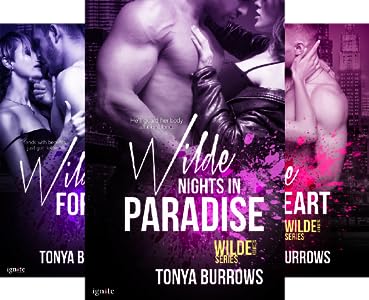 Happily Ever Chapter
4.0 out of 5 stars 4.3 / 5.0 - Smart, Sexy Romantic Suspense!
Reviewed in the United States on September 7, 2015
Verified Purchase
** Provided by Publisher in Exchange for an Honest Review **

-- MY THOUGHTS >
Judging a Book by it's Cover:
A well-dressed man, looking as though the weight of the world rests on his shoulders. Stormy and turbulent background could be an indicator to the mood of the overall setting.
Looking Deeper:
Third-person POV. Although this is the third Wilde book in the series, it can be read on it's own. However, it is my opinion that WILDE AT HEART would be more rewarding to read if read in order - since the characters are so tightly connected.
Reece: Second oldest Wilde brother. Computer Geek, non-athletic. Odd-man out, even in his own family. Disciplined, controlled, focused. Determined to do what it takes to make sure he and his brothers never have to struggle again.
Shelby: Labeled a trouble-maker, a jinx, irresponsible, a wild child. No one knows the dark secrets she hides. Even when she means well, things tend to run amok. She's sacrificed more than anyone knows and she hides her soul-shattering heartache behind her aloof and colorful persona.
Each have past demons, but when the past threatens their future, wedding bells present the perfect solution. Sort of.
Both leads are perfectly flawed individuals that make an entertaining couple. The secondary characters mostly consisted of the brothers and past characters, and some minor cross-over with HORNET. The dialogue is fresh, fun, smart, sassy and believable. The plot is well-layered and dynamic, with an even and smooth blend of suspense and romance. There are a few conflicts that are met in an efficient manner, but more often than not, their ways of dealing with conflicts were less than ideal. Predictability was moderate. I pegged her bad guy early on, but a secondary bad guy facing Reece was not foreseen. The conclusion of this story is solid, but leaves plenty of openings for Vaughn and Greer to begin their books. Overall, I was pleased with the book and thought it made a great addition to the Wilde brothers' books. I look forward to learning what's happening with Greer and discovering what'll happen when Vaughn finds Lark, which we all know will be inevitable.
** Side note: I love Poe and really wish he had the chance to shine more. This was truly his opportunity to prove himself to be something amazing, especially with how smart the breed is.
-------------------------------------------------------------------------
Heat Level: 4.25/ [R] ~ Score: 4.3 ~ Stars: 4
-------------------------------------------------------------------------

RatherBeReading
3.0 out of 5 stars Couldn't decide, but turned out okay.
Reviewed in the United States on April 21, 2020
Verified Purchase
I almost stopped reading at the beginning of this book because of what I thought was Shelby's sneaky, chaotic, lying, personality. She seemed so wrong for uptight, respectable Reece "Hershey" (LOL. Shelby kept calling him candy names). Glad I kept reading. She had a whole different side that we knew nothing about. Her "whaterver" attitude was harboring a hurt, scared, and insecure young woman. Felt the plot was drawn out just a tad too long, but all the questions were wrapped up nicely by the end. I will keep reading.
Read more
Helpful
Report abuse

Angela
5.0 out of 5 stars A definite must read!
Reviewed in the United States on February 18, 2017
Verified Purchase
I absolutely love the Wilde men and this series, and it just keeps getting better and hotter! This is Reece and Shelby's story, and whoever said that opposites attract, they definitely had this couple in mind. Although they are complete opposites, they are exactly what the other needs, and are absolutely adorable and perfect for one another.

When someone tries to ruin both of their lives and they keep ending up in dangerous situations, they decide to wotk together to figure out who's behind everything that's going on, while doing it in an impulsively shocking way. However, Reece doesn't know about the secrets that Shelby is keeping from him, and it may be those secrets that end up causing the most damage. Will they figure out who's behind everything before it's too late? Will what was at first a way to help one another end up being something more permanent for both of them? Will they get the HEA that they deserve? You're definitely going to want to read this to find out!

Beckymmoe
4.0 out of 5 stars Great hero and heroine!
Reviewed in the United States on October 18, 2015
Verified Purchase
Gah! This is book three in the series, and though it worked just fine as a "I haven't read anything from this series yet" book, now it really, really makes me want to read more in the series. Now. But I don't have time--darn grad school!

It seemed like such a good idea nine months ago. But I digress.

There was an awful lot going on throughout the book--many subplots, two families worth of drama, arson, burglaries, employee theft--it honestly all got to be a bit much at times, and I'm still not entirely sure who was doing what all the time. The "suspense" part may have been a bit overdone here. Fortunately, the hero and heroine pulled the story through for me and made it all worth it in the end.

Shelby and Reese together, even though they thought they were too different to work. Each needed what the other supplied.

Poe the parrot and Sam the cat. Stole every scene they were in.

The mystery surrounding Vaughn and Greer. They'll get their books soon, yes?

Not so crazy about: how Eva treats Shelby for about 95% of the book. She pulls it back in the end, but yeah, she was pretty shoddy for the majority of it. Sisters--it's supposed to mean something. Not that I have sisters, but I am one, so...yeah. Pull your head out of your butt and be sisterly.

Shelby's secret: she definitely should have told someone about it earlier. Even just the reader--though Reese would have been a good choice too. That drama got frustrating fast.

Overall, though, I enjoyed the book; it was a fast and entertaining read that definitely left me wanting more from the series. I just checked and books one and two ( Wilde Nights in Paradise and Wilde for Her are on audio, so I can get to them sooner rather than later. Hello, commute to and from work! :)

Pops
5.0 out of 5 stars Sweet & Sour
Reviewed in the United Kingdom on February 16, 2016
Verified Purchase
He tried to change her and it was a journey of finding himself.

I freaking loved Reese & Shelby! This certainly was a tale of opposites attracts and what the heart wants!

Drama, mystery, suspense and a "who is it" theme that keeps you guessing to the end! Reese is the Wilde "geek" but damn he's one helluva hawk one!

Shelby is my modern day heroine, her own person, her own creativity, knows what her heart desires but has her on secrets to keep.

Shelby Bremer is everything Reece is not. She breaks the rules. She dyes her hair lurid colours and has tattoos and piercings. She owns a bird called Poe. She likes to call Reece different candy names, like Hershey. He doesn’t know what it is about her he’s drawn to, but lusts after her he does. She’s off limits, though; not only is she the kind of free spirit that his potential investor would not approve of, she’s also Cam’s wife’s half-sister. Where Shelby goes, trouble follows.

But Reece can’t help himself, and they get up to mischief at the coffee shop – just before someone burns it to the ground. They get out okay, but then Reece receives an email with a compromising photo of him and Shelby and demands for money. Whomever sent it knows he’s trying to attract an investor, and Reece needs this money to not only keep the software company afloat, but also Wilde Security. His brothers are depending on him and he can’t let them down.

It soon becomes clear that blackmail is not the only problem Reece is facing – someone is also after Shelby, and he can’t bring himself to let her face it alone, so he agrees to her crazy plan and they marry in Las Vegas, where they already are for Cam and Eva’s wedding.

They both have secrets, and when Reece tells Shelby his, it blew my mind. My jaw literally hung open! I’ve never seen it in a romance book before and I just loved it – it made me love Reece a thousand times more. It absolutely worked for his character. The identity of the blackmailer and why they’re doing it eventually comes out, as does the real Reece – a computer nerd who’s happy when he’s creating video games. It’s Shelby who frees him to be the man he truly is, and he knows he can’t ever let her go. But will the woman who thinks she’s completely unlovable be able to love him back? Can Reece help her overcome her insecurities, or are they just too different to work together? You’ll just have to read it to find out!
Read more
Report abuse

kirribilligirl
4.0 out of 5 stars Reece and Shelby ...truly the odd adorable couple.
Reviewed in Australia on March 4, 2016
Verified Purchase
Reece was gorgeous and his attraction to Shelby was unwanted and confusing for him. It's always fun when the good sensible man is attracted to the outgoing, cheeky tattoed bad girl. Not an easy story to write and Tonya did a great job telling this story. Some aspects of the story were a tad unbelievable but kinda fun. Be warned if your a reader like me who can get embarrassed when characters are placed in embarrassing situations there will be one or two moments when you read through hooded eyelids.
Read more
Report abuse
See all reviews