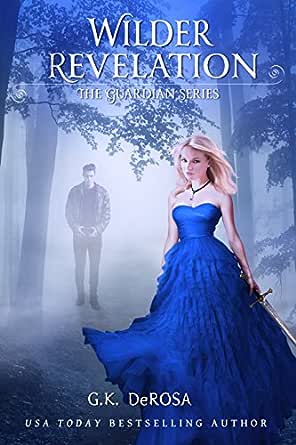 You've subscribed to The Guardian Series! We will preorder your items within 24 hours of when they become available. When new books are released, we'll charge your default payment method for the lowest price available during the pre-order period.
Update your device or payment method, cancel individual pre-orders or your subscription at
Your Memberships & Subscriptions
There was an error. We were unable to process your subscription due to an error. Please refresh and try again. 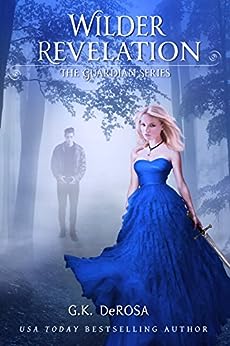 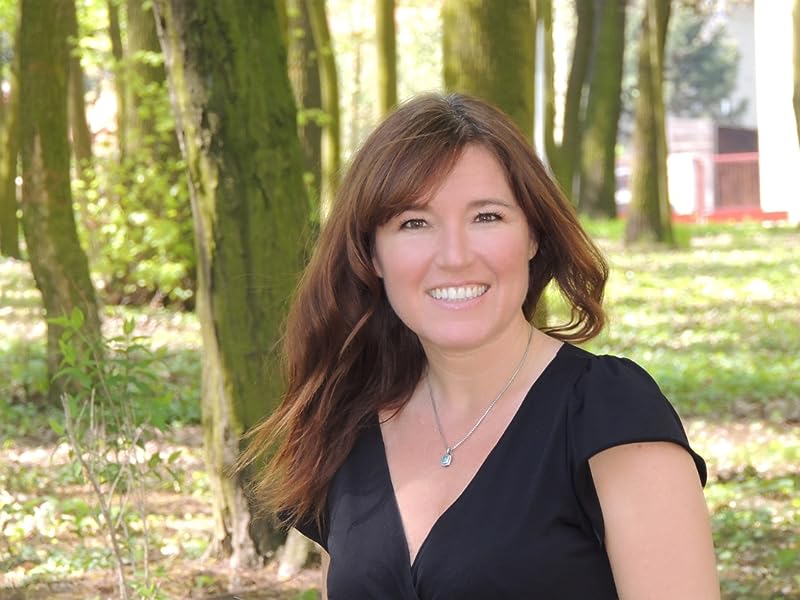 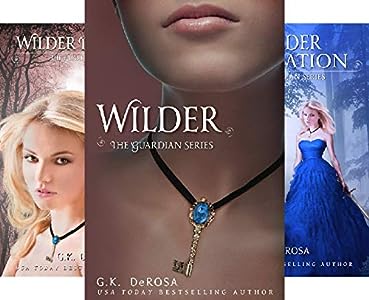 A Story That is Only Getting Better
The kind of story that shatters all predictions from readers and holds so many surprises, you won't be able to guess what happens next.

You know what they say about when you assume things. I fell into that trap before I picked up book three in the Guardian series. And trap it was.

Let's start with Alek, the villain. He isn't quite the big bad evil I wanted to hate. No, he's much more complicated and conflicted than that. In fact, he isn't even the worst person in this story. That title belongs to the werewolf who plagues Celeste at every turn. I was surprised and amazed that Ms. Derosa could make me pity Alek after everything he'd done.

The Constantine brothers are still their swoon worthy selves, though Celeste and Roman's relationship has become more complicated - like everything else. I think my favorite character was the sexy, protective Italian guardian that Celeste befriends. I appreciated that the author didn't turn it in to a love triangle situation, as much as our new beau wants it to be. Celeste only has eyes for Roman.

The biggest thing I didn't like about this book was that it was over and that's a testament to the cinematic style with which G.K. Derosa writes.

This is a series that has gotten better with each book and I can't wait for more from this author. - YA Book Central, Staff Reviewer

From an early age, G.K. De Rosa showed a passion for reading and a very vivid imagination. She was instilled with a love of storytelling by exemplary teachers in her early years of Catholic school and that first love was never forgotten. Though she pursued a degree in International Business from the University of Florida, she eventually came back to her creative writing roots years later. Drawn to young adult novels and being an eternal romantic at heart, a fantasy romance was a natural choice for her debut series. She currently lives in South Florida with her real life Prince Charming and their fur baby, Nico, the German shepherd. --This text refers to the paperback edition.

4.2 out of 5 stars
4.2 out of 5
36 global ratings
How are ratings calculated?
To calculate the overall star rating and percentage breakdown by star, we don’t use a simple average. Instead, our system considers things like how recent a review is and if the reviewer bought the item on Amazon. It also analyzes reviews to verify trustworthiness.

Carrie Kettle
1.0 out of 5 stars Good story, bad writing, awful characters.
Reviewed in the United States on October 16, 2017
Verified Purchase
I really wanted to love these books, I really did. The storyline is decent but that is about all the good I can say about it. The writing is just plain terrible. I am not the best at grammar myself, unlike my mother and sister who were always ready to correct me, but even I can see the constant grammatical errors and poorly composed sentences. Often the way she writes a sentence has me so confused I have no idea what is happening. Like when Roman was trying to tell Celest she would be better off without him??? I didn't get what he was implying with his impassioned speech about being a better man, until she ran to the car heartbroken. In addition, the author is constantly contradicted herself. When Lillianne has her first flashback, she remembers Dani running to her telling her the fairys had told her everything and she was worried, then she turns right around and says the fairys are sworn to secrecy and they cannot lie. Unfortunately that was only the beginning of the contractions. During her next flashback Lillianne is having Alex and Danni is there!! Wait, what? Wasn't she told all about it by the fairies sworn to secrecy?? The whole series is riddled with these contractions. In the last book Roman noticed Celestes cuts and scraps when she wakes up and feels bad he didn't notice them before. Celeste gets up and goes home. At home Celeste notes that her scraps and cuts feel so much better thanks to Roman who cleaned and bandaged them while she was sleeping. I mean, didn't this girl have an editor? If so she needs fired.
The bad writing is not the only down side, the characters themselves are annoying as all get out. But only the main characters, the side kicks are well portrayed like Nico, Brian, and Nicole. Stellen though is a powerful sorcerer who is never able to do anything but stand there watching. Oh, and open portals. He is great at that. Roman is a mature vampire with the personality of a fifteen year old boy. He can't control himself, he pouts (a lot) he rages, he bemoans that he isn't good enough, he smirks and is sullen (two of the authors favorite descriptors). Celeste herself is ok, if you don't mind a heroine who likes to stand around watching things happen without doing or saying anything. Or one that is supposed to be powerful but misses her blows and is defeated far more than she is a successful badass.
So yeah. Decent story, but overwhelmed with bad writing and bad characters. The whole series is very disappointing.
Read more
Helpful
Comment Report abuse

Amazon Customer
4.0 out of 5 stars Carry on My Good Friend With an Awesome Story!!
Reviewed in the United States on May 31, 2016
Verified Purchase
The third installment continues with Celeste, Roman, and his brother Nico battling supernatural beings.

The Constantin's mother, Lilliana, is back from the dead. Their half-brother, Alek, is free and somehow stronger than ever. A pack of rogue werewolves are wreaking havoc in her small town. And on top of all of this, Celeste faces what is at best an uncertain future with the love of her life.

When Celeste faces a dead of one of her friends, she is pushed to her breaking point. After fighting her most formidable enemies, Celeste discovers there is an evil presence inside her that's seeping through.

While the story held my attention through out, like most middle books, the pacing was a bit slow but still moved forward and nicely set up for the fourth and final installment. Will I read what happens? Of course!! I can't wait!!!!
Read more
Helpful
Comment Report abuse

Jennydm
5.0 out of 5 stars Love this series!
Reviewed in the United States on March 21, 2016
Verified Purchase
Book 3 starts exactly where 2 left off. I was saddened at the loss of two characters, but I can see it was necessary for the turmoil that Celeste must face. I love how the author provided some backstory for several of the characters that provided a lot of insight into how they are and why the events unfolded the way they have. I must say I love the interaction between Celeste and Marco more and more and dare I say it am leaning more toward Team Marco! Shame on me!!! What can I say I love Roman, but Marco has this certain draw to him that I would love to see explored in the next book. Maybe since there are so many guardians in Rome, he can be permanently reassigned to Oak Bluffs! That would really throw a curve ball into the mix. I still hold out hopes that someone at the CW will read these books and bring them to life as only the CW could or maybe Freeform could pick it up since they are doing such a wonderful job with the Mortal Instruments series. I wouldn't complain either way!!!! If you haven't read this series you really should and leave the author some love and she really has done an excellent job with this series. I can't wait for the next book!
Read more
One person found this helpful
Helpful
Comment Report abuse

Kindle Customer
3.0 out of 5 stars Some good action
Reviewed in the United States on June 10, 2017
Verified Purchase
The battle scenes are fairly vivid, and dialogue has improved from the first book. However, I find I don't at all care for Roman. His jealousy is unattractive and really indicates a lack of maturity despite the fact he's several decades old. Celeste would be better off with Marco. Also, no real explanation is given as to how Maks is overcoming his vampire nature, and how he can get around in daylight.
Read more
Helpful
Comment Report abuse

Robin M. Wiley
5.0 out of 5 stars Best in series - so far!
Reviewed in the United States on March 28, 2016
Verified Purchase
This book was fantastic!!!! The series just gets better with each book. I love the storyline that Celeste goes through. The story in this book is great with the introduction of new characters and even with the loss of a beloved character. Can't wait for the next book.
Read more
Helpful
Comment Report abuse

Kindle Customer
5.0 out of 5 stars Great read
Reviewed in the United States on May 3, 2016
Verified Purchase
I like how the story moves along how the characters develop can't wait for the next book
Read more
Helpful
Comment Report abuse

Nicole Q.
5.0 out of 5 stars Exciting read
Reviewed in the United States on August 8, 2016
Verified Purchase
Follow Celeste through Poland and Italy while she becomes a woman and discovers the darkness!
Read more
Helpful
Comment Report abuse
See all reviews