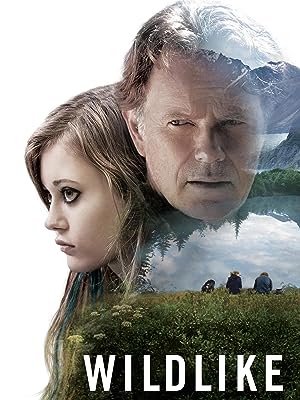 Lynn Reviewed in the United States on January 21, 2021
5.0 out of 5 stars
Gem
Verified purchase
My goodness, what a lovely movie. Yes, it deals with abuse. Abuse that takes place every single minute of every day.
Children who are victimized and placed in danger by the very people that should protect them. The writer/director uniquely portrays this dilemma creating another character - the wilderness of Alaska - that is as human and vulnerable as the two main characters. For me personally, it was well worth the investment of my time.
37 people found this helpful

Amazon CustomerReviewed in the United States on February 8, 2021
4.0 out of 5 stars
A damaged girl with so few options
Verified purchase
Damaged and confused people try all sorts of inappropriate solutions, in this case in a beautiful natural environment. I think many of the reviews that criticize the girl's obvious stupid choices don't realize the damage that abuse does to a young mind. People with no options and no power don't make good choices, especially if they're 14.

This movie is about a young girl (14 years old) who is in her searching years, obviously already trying to figure out her life (hints: wildly ugly makeup and constant chewing on her sleeves), who is abused by her uncle and then tries to escape from him. But where to? In a strange place with no resources (Alaska), she tries to get away. For those who don't know, a ship or airplane is the only way to get out of some of the towns in the Alaska panhandle, and Juneau is a small enough town that hiding there is not much of an option. She ends up choosing a slim option of following what appears to be a decent man on his own search for closure after his wife's death. This girl, like most 14 year olds, is naive and clueless, and that comes across as bad judgment in many cases.

I thought it was very realistic in showing how impaired young people can be when they have few options. The fact that so many reviewers hate her attitude is exactly why these kids often end up thrown away. Is it any wonder that she has a bad attitude? Lack of judgment, no money, no knowledge of geography, paranoid because the people closest to you have hurt you--good grief, she had a lot of things going against her just like in real life. She tried to get close to people in the only way she knew how, and it only hurt her more.

Some reviewers complained about the ending. It is a closure. I got it. You'll have to see it to decide, but I thought it was fine.

As a bonus, the entire movie shows the magnificent Alaska scenery, which hints at its harshness. If you spend any time outdoors, you can tell that she would have died if her chosen companion hadn't decided to help her. More bad choices, just like most 14 year olds I know. But her random companion choice worked out. Not a great pathway to a better life if you had other options (and the police do not always help in these situations), but it worked for her. Which is one of the messages of the movie: how unlikely it was that her life would become better without this random help.

MyOpinionReviewed in the United States on January 28, 2021
1.0 out of 5 stars
Highly Obnoxious
Verified purchase
This girl is just nauseating...the freakishly huge eyes rimed in black, the lallygagging stares...her in-your-face close ups on screen 90% of the time, her freeloading ways...complete fail to build a morsel of empathy for this young girl. I can't get past the fact the central character, this actress, is so completely self-absorbed and posey...she plays to the camera with pouty mouth and seductively sucking her fingers the entire film in attempt to entice the viewer to empathize with her...weird as it contradicts her supposed reason for running off. Lacks any depth or development. When the central character is this much of a pain, it becomes very difficult to invest one's self or bond in someway with who she is or her plight which is the crucial fail of the story! Pass!
19 people found this helpful

Thomas SimmonsReviewed in the United States on February 28, 2021
5.0 out of 5 stars
An Exeptionally Accurate Film
Verified purchase
As a survivor of childhood physical, emotional, and sexual abuse, I would like to add my voice to the admiring reviews here. I had not heard of *Wildlike* before it showed up on Amazon Prime Video, but it's the film that has most gripped me since another Bruce Greenwood film (with Denzel Washington and Paula Patton), *Deja Vu*. Over the course of *Wildlike,* Mackenzie (Ella Purnell) manages to be utterly alone; incredibly resilient; and incredibly vulnerable. One of the characteristics of being abused by those one is told to trust is that, generally, one can trust no one, not even oneself: decisions disintegrate into impulses that become other impulses, until one's own survival may be at stake. Mackenzie's aloneness in Denali, among so many vacationers and backpackers, is striking (and reminds me of my own time there, alone, in 1992). Her impulsive resourcefulness--sleeping in strangers' cars, pretending to be a hotel or motel guest, etc.--happens to land her in proximity to someone seemingly entirely unlike her. But Bart (Bruce Greenwood) is a straight shooter, and her persistence in pursuing him suggests some accurate intuition still working beneath abuse-driven impulses. Her vulnerability--when she pounds on his car window and says "I'm trying!"--and at the very end--is a masterful piece of performance. We don't know what Mackenzie's and Bart's relationship will be like once they are both back in Seattle, but given all that happens in the film, it seems unlikely to repeat an abusive pattern. Amazon uses the word "sanctuary" in its description of the overall direction of the film, and that seems particularly accurate to me--something I have to say I never found.
12 people found this helpful

Frederick A. M.Reviewed in the United States on February 3, 2021
4.0 out of 5 stars
Finally, a character portraying a decent man!
Verified purchase
That's right! A strong film with a man who does what is right and doesn't get the shaft for it. What a breath of fresh air it 'tis. In the beautiful Alaska wilderness, no less. A beautiful soundtrack, so peaceful. I think the woman portraying the 14-year-old runaway should be considered for an Oscar. A wonderful performance, indeed. I had never heard of this film until I saw it listed here on Amazon. It's a shame, really. A lot more people should know about this film. My recommendation? If you're reading this review right now, choose to watch this one. There are uncomfortable moments early on in the film. But stay with the story, don't turn away. After those rough moments, you'll meet characters that you're gonna love. This film has restored my faith in some of humanity.
12 people found this helpful

linda galellaReviewed in the United States on February 13, 2021
3.0 out of 5 stars
14 going on 24...
Verified purchase
Ella Purnell is awful in this movie - over acted and over made up. The last place I saw her was in “Sweetbitter” and she was good, so this is a surprise; a bad and unfortunate one. Brian Gergahty is good at being despicable. The problem is that there are no foundations in this film. There’s limited background for why Mackenzie is shipped to Alaska, who the guy is that takes her in, why she doesn’t fight for herself, why her mom is having trouble, and on and on. The movie needs context.

Bruce Greenwood does an ok job as the grieving husband backpacker, Rene, that “rescues” Mackenzie. They scenery around Denali is gorgeous but the camera work is limited; Nat Geo this ain’t! There are a few ancillary character actors along the way you might recognize but they fall prey to the same issues, they’re stuck into a script for some effect that didn’t take hold.

Parents be advised that there are scenes indicating sexual abuse, (no activity), girl dressed only in a towel, lying on a bed in older guy’s room, an inappropriate advance by Mackenzie to Rene that’s denied, and a few expletives including f-bombs, very infrequent.

I wanted to get a warm fuzzy feeling about this movie or cheer for Greenwood coming to the rescue of a teen in need but I ended up feeling ambivalent, and slightly soggy, like the weather in the flick🍿

tkReviewed in the United States on December 4, 2016
4.0 out of 5 stars
Powerful movie about sexual abuse
Verified purchase
This is a powerful movie about sexual abuse. The movie uses scenery as a secondary plot to show not only how nature heals but also to underscore that man is the most dangerous animal and there are lot worse things that could happen to a girl. A lot of reviewers wanted to gloss over the "ugliness" and talk about the scenery but the movie is all about the sexual abuse of a 14 year old girl. It portrays the abuser well. It makes him someone you would not expect, a good looking, fit, young guy with a good job and nice house. Doing the right thing by his sister and taking in his niece. After all why would he do that, he could easily get a girlfriend right? Who would believe the girl. Its a good portrayal of how a predator grooms his victim, the way he manipulates his victim afterwards and act like it's their secret. Its also a good portrayal of how the girl turns into someone who thinks her only value is through providing sex to men. Next time you turn your nose up when passing a street kid, think of this movie.
32 people found this helpful

T.L.Reviewed in the United States on March 6, 2021
1.0 out of 5 stars
Ridiculous
Verified purchase
A girl is sent to live with her Uncle in Alaska while her addict mother is in rehab in Alaska. She is molested by the Uncle and runs away. So far this is a believable plot. The movie jumps the shark when the girl finds some random man and follows him around. When the man realizes she is alone without a guardian or supplies and has followed him from his motel room onto a ferry and onto a bus headed into the wilderness he doesn't do what any caring or reasonable adult would do and notify authorities or even the bus driver. Then he's somehow shocked when she follows him off the bus when it drops him off in the wilderness and allows her to lead him/follow him into the Alaskan wilderness on a backpacking trip. She has no food, appropriate clothing, bear spray, shelter or skills. He had the option of waiting by the road or walking back on the road to alert someone to the issue. The only reason he would have continued with his plans is if he was interested in hurting her or allowing her to die out there.
One person found this helpful
See all reviews
Back to top
Get to Know Us
Make Money with Us
Amazon Payment Products
Let Us Help You
EnglishChoose a language for shopping. United StatesChoose a country/region for shopping.
© 1996-2022, Amazon.com, Inc. or its affiliates