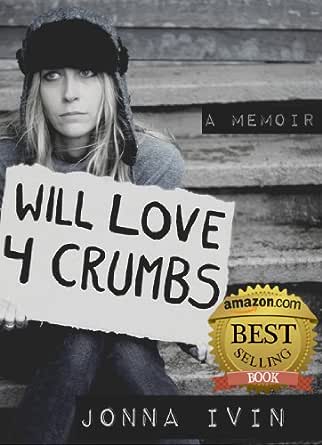 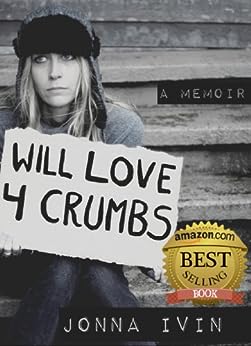 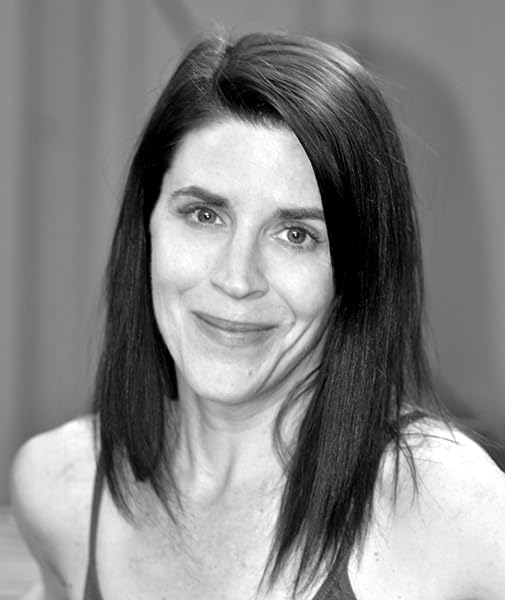 Will Love For Crumbs - A Memoir Kindle Edition

Jonna Ivin is the founder of STIR Journal. She is the author of the memoir Will Love For Crumbs, the humorous coming-of-age novel, Sister Girl and the crime thriller 8th Amendment.


Visit Jonna on Facebook at facebook.com/jonna.ivin or at jonnaivin.com --This text refers to the paperback edition.

4.0 out of 5 stars
4 out of 5
227 global ratings
How are ratings calculated?
To calculate the overall star rating and percentage breakdown by star, we don’t use a simple average. Instead, our system considers things like how recent a review is and if the reviewer bought the item on Amazon. It also analyzes reviews to verify trustworthiness.
Top reviews

Happyslapper
4.0 out of 5 stars How Many of Us Have Not "Loved for Crumbs"?
Reviewed in the United States on August 10, 2014
Verified Purchase
While I was reading this book, I could not put it down. It was passionate, eloquent, and flowed with memories, some good, some bad in holding the reader's interest. I was going to give it five stars until I got to the end and began to read what appeared to be Chapter One and the Prologue of a completely different book, 8th amendment. I found that very strange.

That being said, the author takes us on a highly descriptive journey of being raised by an alcoholic mother, the absence of her father her love yet conflicts with her siblings, and the general chaos that ensues in her life while growing up. Jonna takes off for volunteer work as a form of escape. There she meets a man who is toxic, a drug addict, and a compulsive liar. But she loves him. The ambivalent feelings she has for this relationship are palpable - she knows he is no good for her, but loves him intently, for his is indeed a charmer. She blames God for her poverty, her situation in life until she realizes the problem was never with God, but with her own poor choices.

In attempting to fill "holes" in her soul, she awakens to the fact that it was she and only she that crazed persons, places and things that were unavailable, causing her misery in the end.

I think most of us "sixties kids" remember at some point in our lives Loving for Crumbs. I know I do. This book is a must read, and indeed, by only criticism, perhaps at the encouragement of her editor, was sticking a portion of another book at the end of this one. This book can clearly stand on it's own!
Read more
3 people found this helpful
Helpful
Comment Report abuse

Susan
5.0 out of 5 stars Will Love For Crumbs ... a solid 5-stars
Reviewed in the United States on May 21, 2013
Verified Purchase
This is the second book of Jonna Ivin's that I've read. Enjoy her down-to-earth, gritty, no nonsense approach to storytelling. In the fact that this was a true story..her true story...makes it even more emotionally gripping. After a childhood of dealing with an alcoholic mother, constantly moving from one place to another, she thinks she has finally found the man of her dreams and stability. But something keeps nagging at her about Chris...ignoring her gut instincts, she decides her fears are unfounded.
Ms. Ivin should be praised for the courage to expose her deepest thoughts, insecurities and family secrets for us all to see.
Read more
4 people found this helpful
Helpful
Comment Report abuse

Elizabeth Beseke
3.0 out of 5 stars A bit under developed but interesting enough
Reviewed in the United States on January 27, 2017
Verified Purchase
I purchased this book on the kindle deals. I found myself having a hard time putting it down. I felt strangely enthralled with the characters but mostly annoyed. Then I groaned audibly at the ending. I found myself asking "What was the point?" The last chapter was clearly an after thought based on her friends' comments. The point would have been excellent if it had been developed. Perhaps an illustration of her evolution to the understanding of God or life would have been helpful. Instead we are left wondering if this woman (who seemed to be portrayed as a girl) ever learned her lesson about men. We are left to think she keeps the same pattern in her attraction to Greg. Was that the illustration she learned her lesson? If so, the theme is underdeveloped. However, writing memoir is not easy so I applaud her vulnerability.
Read more
Helpful
Comment Report abuse

Sue D. Mackenzie
5.0 out of 5 stars Insecurities
Reviewed in the United States on November 15, 2016
Verified Purchase
I chose this rating because I think the author told her story in the exact way many women suffer in relationships with men, and I enjoyed that she finally came to the realization that the problem was within her and not with the man she hooked up with. It seems she finally found her self worth. The words flow, she writes well. I could understand why she was attracted to this man. Plenty of women are attracted to the bad boys, until they find out how damaged that type of man really is. Women can blame the men, but this girl actually realized the real problem was within herself.
Read more
Helpful
Comment Report abuse

Jeanne Lynn
5.0 out of 5 stars A Fascinating Look at a Bad Relationship
Reviewed in the United States on July 18, 2012
Verified Purchase
I love reading memoirs, particularly if they involve unhappy relationships.

While volunteering with the Red Cross, Jonna meets Chris. Jonna thinks that Chris may be the man of her dreams.

Then, of course, it goes sour. Chris is a liar, con man, thief and drug addict. Prince Charming turns into a frog.

I couldn't put this book down until I read it all. It was a fascinating memoir. There were plenty of twists and turns. This is the type of story that I can never get enough of.

I wonder where Chris is now. He's probably still out there, conning and charming other women.

I'd love to read another book by Jonna. I'm curious to see how her life is going now.
Read more
3 people found this helpful
Helpful
Comment Report abuse

Andrew E Perkins
5.0 out of 5 stars A Great Quick Read Story of Self-Enlightenment
Reviewed in the United States on March 23, 2014
Verified Purchase
A good autobiography or memoir will have the reader experience many human emotions from laughter, joy, sadness, envy, anger, and love. In the few hours it took to read this telling story I laughed so hard and I nearly dropped my Kindle off the hotel balcony, I had to stop reading in public to maintain my masculinity, and at times got so p!$$'d that I had to take a break. I once knew a guy like Chris who, when I first meet him I knew most if not all his life stories just couldn't add up and I didn't say anything to the loved one who was involved with him for the same reason others didn't say anything to Jonna. I am going to put "Will Love For Crumbs" on my adult Sunday school class recommended reading list. Thank you for your memoir Jonna.
Read more
5 people found this helpful
Helpful
Comment Report abuse

Leyna
VINE VOICE
3.0 out of 5 stars Ending Stunk!!!
Reviewed in the United States on June 1, 2016
Verified Purchase
I loved the story, the authors' writing was great, kept me from wanting to put my kindle down. Read this as much as possible.I so wanted to know how the author's life evolved after everything she had gone through. Then it ended very abruptly. I felt like I fell off of a cliff after reading the ending. Where was the editing for the conclusion?
Read more
2 people found this helpful
Helpful
Comment Report abuse
See all reviews

Charles Christian
5.0 out of 5 stars A seriously good book
Reviewed in the United Kingdom on February 28, 2014
Verified Purchase
It's a cliche but 'I was gripped' and that was even before the tale turned terrifying. A tale of someone who is damaged colliding with someone even more unhinged and it's easy to see how that might happen to anyone. It reads so well it's clearly a competent writer who has had the misfortune, but in other ways as a writer - the luck - to be involved in a riveting true experience in their life that makes a great book! Recommended.
Read more
One person found this helpful
Report abuse

simon barry allen
2.0 out of 5 stars will love for crumbs
Reviewed in the United Kingdom on January 27, 2013
Verified Purchase
I found this book hard to get into and gave up 1/3 of the way through, I am not saying its a bad book but just not the book for me.
Read more
Report abuse

Jacqueline Walsh
3.0 out of 5 stars why ?
Reviewed in the United Kingdom on July 28, 2012
Verified Purchase
A story of deep passionate love, which isn't always returned. Why are some people the way they are, & yert irresistable?
Read more
One person found this helpful
Report abuse

Amazon Customer
3.0 out of 5 stars Ambivalent Reader
Reviewed in Australia on April 7, 2019
Verified Purchase
I'm not sure what to make of this book. I understand there are 2 sides to every story. The book was well written and kept me enthralled right until the author punches her boyfriend in the face. I won't be reading the ending. Sure he was a liar, but at what point does that excuse domestic violence. If a man did this to a woman he would end up in jail. It was at this point in the book I wondered how much was actually true or fabricated to bring in an audience.
Read more
Report abuse

SunnyB
5.0 out of 5 stars Brilliant - don't understand the negative reviews ....
Reviewed in the United Kingdom on August 8, 2012
Verified Purchase
It was a guttsy move to put such raw and personal stuff out there. Told very baldly, warts and all, it's a story I'm sure many women can identify with to some degree. As the saying goes, 'You have to kiss alot of frogs .....', but the biggest problems arise when the frogs come in disguise! I hope it was a cathertic experience for the writer, because I'm sure it will be a cathertic read for others. Personally, I found it a profound read and food for thought. A recommended read.
Read more
One person found this helpful
Report abuse
See all reviews