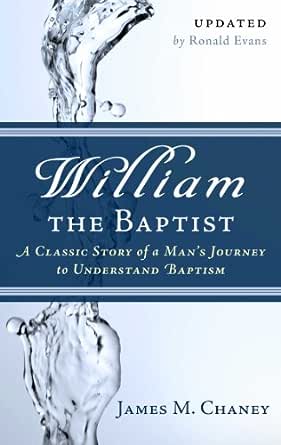 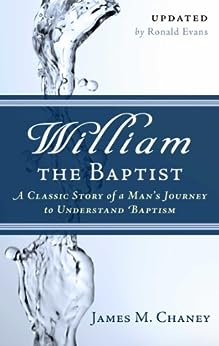 William the Baptist: A Classic Story of a Man's Journey to Understand Baptism Kindle Edition

"An enlightening read. With warmth and imagination, Chaney winsomely guides readers through the Bible's teaching on baptism. An invaluable resource." --Douglas Bond, author of The Betrayal: A Novel on John Calvin and Guns of Providence

"A narrative that is fast-moving and biblically engaging, here is a page-turner that Ron Evans has enhanced by updating it into today's language. An intriguing short read with lifelong implications." --Harry L. Reeder III, senior pastor, Briarwood Presbyterian Church, Birmingham, Alabama --This text refers to the paperback edition.

James M. Chaney (1831-1909) graduated from the William Jewell College in Missouri, received a Masters degree from King College in Tennessee, and a Doctor of Divinity degree from Princeton Theological Seminary in New Jersey. He was ordained in 1858 by the Lafayette Presbytery of the Presbyterian Church, Missouri. --This text refers to the paperback edition.

estoer
5.0 out of 5 stars A classic dialogue between a confirmed Baptist and a Presbyterian minister
Reviewed in the United States on February 25, 2017
Verified Purchase
A classic, mostly concerning the mode but also the subjects of baptism from the Reformed perspective. Deals charitably with the Baptist position. This series of dialogues between a Baptist suitor to a Presbyterian lady, and the woman's minister, is well worth purchase and reading, although now long out of print and getting harder to find.
Read more
Helpful
Comment Report abuse

Mike
2.0 out of 5 stars Avoid the Publisher, Find it Elsewhere
Reviewed in the United States on November 26, 2018
Verified Purchase
A classic book. None better on the subject. But I will avoid Wilder Publications in the future. Numerous typos, and they are known for their standard disclaimer warning the reader that there are many past beliefs and values that are no longer accepted. They even disclaim the Declaration of Independence.
Read more
Helpful
Comment Report abuse

Reformation Lady
5.0 out of 5 stars Excellent book on Paedobaptism
Reviewed in the United States on September 14, 2012
Verified Purchase
I have embraced Reformed Theology for over 24 years now. Most of that time I was a Reformed Baptist. I have read several books on infant baptism according to the Reformed view,though the other books were well done this book surpasses them. In an easy read conversational style writing, it brings many points "us" baptists believe under close examination. Well done --non threatening --I am now a believer in infant baptism and attending a Christian Reformed Church. I guess you can say I have become a "True Reformer" though this book. Excellent-I love the systemic approach Reformed Theology has and it is God's truth revealed. The book focuses more on the mode and the meaning of baptism ie. immersion (buried with Christ to new life) vs. the Holy Spirit being poured out upon the individual. Highly recommended to all you dear brothers and sisters in Christ who believe there is no biblical evidence for paedobaptism. This will challenge you.
Read more
3 people found this helpful
Helpful
Comment Report abuse

Cristian Zelaya
5.0 out of 5 stars Made me reconsider the mode of Baptism.
Reviewed in the United States on June 10, 2017
Verified Purchase
I have transitioned from a Baptist understanding of Baptism to a Presbyterian, one of the things I never questioned was the mode of Baptism. I always assumed immersion to be the proper formed. This conversational style book, has made reconsider by making a strong case for sprinkling/pouring.
Read more
Helpful
Comment Report abuse

R. Ernst
5.0 out of 5 stars Clear and scriptural explanation of Christian baptism
Reviewed in the United States on December 31, 2012
Verified Purchase
I've read quite a few books on baptism in the past year and this quickly became one of my favorites. The most helpful books I'd found up until a few months ago were "Christian Baptism" by John Murray and "To A Thousand Generations" by Douglas Wilson as they both clearly explain the meaning and administration of baptism and they're both very concise-- they aren't mired down with straw man arguments, what various historical church figures believed on the issue, etc.

However, I think P&R's new printing of "William the Baptist" will be my new go-to book for sharing with reformed credobaptist friends. It's a cleverly told story about a Baptist man who marries a Presbyterian woman and, after a few years of marriage, decides to meet with his wife's pastor to debate the proper mode and administration of baptism. The book has several strengths. For one, it's quite short. At a little over a hundred pages, it's not entirely exhaustive of the topic, but it covers more than enough material to help someone come to an informed conclusion about the biblical administration and meaning of baptism. This is in comparison to Paul Jewett's book refuting paedobaptism at 268 pages which, although I personally have read it, is a length that would be a turn off to most people who already feel convicted of one side of the argument and don't really want to read a thick book refuting (or even supporting) their view. Secondly, it has a very gracious tone, unlike many of the things I've read which are less than kind to the opposing view. Third, this version has updated language; I haven't read the original book but I found this to be very easy to understand. Likewise, the conversational/dialogical way the book is written makes it very intuitive in its flow and very pleasant to read. And finally, and most importantly, is that it appeals solely to scripture. There aren't, as I've referred to before, any historical arguments or references to doctrinal statements; everything is directly taken from the Bible.
This does not go into as much detail, specifically, about infant baptism as some other books. It isn't really mentioned until the end, although I think the explanation is still quite helpful. For more on that aspect (or about baptism in general), refer to the other two books I mentioned, which are both useful and unique in their own right.

I don't think anyone should blame "capital B" Baptists for either not understanding or not embracing the practice of covenant child baptism since nowadays it seems even most Presbyterians don't have a good grasp of why they do it. But this book is so short and clear, there's no excuse not to read it. If you're on the fence in your thinking, interested in reading about the opposing view on baptism, or hoping to bolster your current conviction, this is helpful for anyone. Plus I think it's useful for anyone to read a good work on both sides of the aisle so, please, check this one out. It's well worth your time.
Read more
3 people found this helpful
Helpful
Comment Report abuse