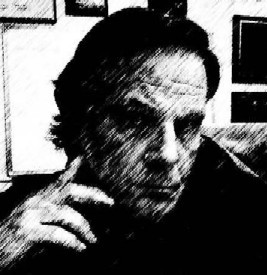 William E. Wallace is a former investigative reporter for the San Francisco Chronicle who covered such topics as political corruption, organized crime and police misconduct for 26 years. His work won awards from the Society of Professional Journalists and the San Francisco Press Club.

He took early retirement in 2006, and currently is a full-time novelist and short-story writer.

His most recent book, Face Value: An Eddie Pax Novella, was released as a Shotgun Honey Single in July 2016. His earlier books, Hangman’s Dozen (2016) and Dead Heat with the Reaper (2015) were published by All Due Respect books. His short stories have appeared in numerous magazines, including Out of the Gutter Online, Shotgun Honey, Near to the Knuckle, Beat to a Pulp, Plan B and Spinetingler.

He has self-published "The Jade Bone Jar," a private eye yarn set in 1947 Oakland, California; "The Judas Hunter," a novel featuring Jackson Burial, a down-and-out private investigator; "I Wait to Die!" a novella; "Little Nightmares," a collection of five stories; and "Tamer," a western adventure featuring Amos Kuttner, a former U.S. Army Captain turned government agent that is set in California during and immediately after the 1849 Gold Rush.

He is currently working on "Bottom Street," a novel about crime in San Francisco's Tenderloin.

Wallace has taught journalism at California State University, East Bay in Hayward and at the University of California, Berkeley. He took his bachelor's degree in political science at Cal Berkeley and served as an intelligence analyst while serving in the U.S. Navy during the Vietnam War.

He lives with his wife and son in Berkeley, California. 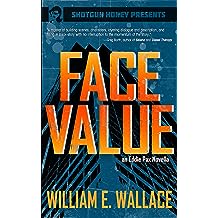 Face Value: An Eddie Pax Novella Nov 7, 2017
by William E. Wallace
( 2 )
$4.21
Eddie Pax is a special kind of repo man: he recovers “wet money”—assets that have been stolen from one of the largest criminal syndicates in North America. The job is often grim because when Eddie closes an account, he also kills the thieves.

But when his boss sends him out to recover five million dollars’ worth of bearer bonds two crooks hot-fingered from a vault in New York, Eddie gets a rare opportunity to mix business and pleasure: one of the thieves is a man who shot Pax during a jewelry heist in Southern California a dozen years earlier. Eddie’s recovery will give him a chance to even the score.

Unfortunately, the securities Pax are supposed to recover have been hidden and the bodies of the thieves who stole it are piling up like cordwood. The cops have their eyes on Eddie, as does a woman who is hoping to grab her share of the loot. And the man who shot Pax knows his former partner is on his trail.

“A master at building scenes, characters, layering dialogue and description, and filling in back-story with no interruption to the momentum of the story.”—Greg Barth, author of Selena and Diesel Therapy

“The best of William E. Wallace’s work revolves around the concept of justice…I’m talking the big, broader cosmic sense. Judgment. Reckoning. Down in the filth and garbage of the street, it’s all street justice.”—Joe Clifford, author of December Boys and Lamentation

“It is not easy to combine humor, characterization, and persuasive action but here it’s done well. These stories will make you a Wallace fan.”—Patti Abbott, author of Shot in Detroit and Concrete Angel

“Wallace is quite simply a brilliant writer.”—Will Viharo, author of Love Stories Are Too Violent for Me

“William Wallace is next in line for ‘Best of the Year’ lists.”—Anonymous-9, author of Hard Bite and Bite Harder
Read more
Other Formats: Paperback 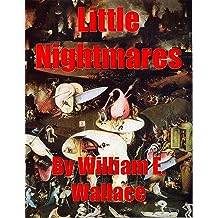 Little Nightmares Mar 29, 2013
by William E. Wallace
$2.99
Little Nightmares is an anthology consisting of one long novelette and four short stories offering a unique cut on the classic horror and fantasy genre. The stories in the anthology include "Witch's Hat Trick," a modern urban fantasy novelette about a Ukrainian immigrant who runs afoul of the Russian Mafiya, and "Obeah," a tale of black magic in the Old West. Two of the stories, "Short Seller" and "Hard Repo," are crime tales with a gruesome slant and Scratchers is a classic horror story.
Read more 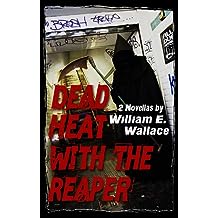 Dead Heat with the Reaper Jul 30, 2015
by William E. Wallace
( 21 )
$2.99
Dead Heat with the Reaper is a one-two punch of crime novellas. In Legacy, retired steel mill worker Frank Trask is a badass who passes out in front of his Oakland, California apartment and wakes to find he won't live much longer. The news leaves him with a big problem: how to use more than $400,000 in savings. His solution is good but not strictly legal—and Frank may not live long enough to pull it off.

In The Creep, Sergeant Alan Baldocchi survived the IED that killed his armored carrier crew in Afghanistan, but the blast left him so scarred that people he meets look away in disgust. Now a civilian, Baldocchi meets Susan, a nurse who—against her better judgment—takes a liking to him. Unfortunately the run-down apartment house they live in is infested by young criminals—and the leader of the gang has violent plans for both of them.

“Really, you must acquaint yourself with this novella duo by William Wallace. He's next in line for ‘Best of the Year’ lists.” -- Anonymous-9, author of Hard Bite, Bite Harder

“Like Raymond Chandler, Wallace has a penchant for that turn of phrase that burns and blazes long into the night.” -- Joe Clifford, author of Junkie Love and Lamentation 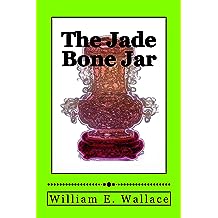 The Jade Bone Jar Mar 5, 2014
by William Wallace
( 2 )
$4.99
A war profiteer, a missing girl and a precious antiquity: Mickey Lynch, private eye, is up to his armpits in intrigue and murder in 1947 Oakland, California.

While checking the background of a millionaire tapped for a White House job, Lynch, a former U.S. Marine and Honolulu cop, discovers a real estate scam, political corruption, drugs and treason.

He crosses paths with a U.S. Marshal, two crooked FBI agents and a mysterious Brazilian who is a martial arts expert. At the same time, he has to disprove allegations he conspired to commit perjury in a “Dear John” homicide case.

As his investigation proceeds, he learns one reason why 127,000 Japanese-Americans were rounded up and imprisoned on the U.S. West Coast during the war, and uncovers a plot to wipe out the African-American blues and jazz scene in Bohemian West Oakland.

And Lynch discovers that the object that ties all these threads together is a 600-year-old relic of feudal Japan: a funerary urn made of precious gemstone: the Jade Bone Jar!
Read more
Other Formats: Paperback 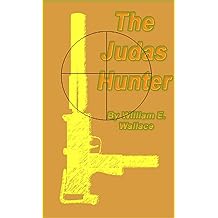 The Judas Hunter Apr 1, 2013
by William E. Wallace
( 3 )
$2.99
Private eye Jack Burial's picture should appear in Funk and Wagnall's next to the entry for "loser:" he drives a clapped-out Chevy station wagon, is being divorced by his lawyer wife and has so few clients as an investigator that his cell phone has been cut off and he's on the verge of eviction. His only real source of income comes from Oakland, California's burgeoning "bond market," tracking down jailbirds who have skipped bail to avoid prosecution.

So when Burial gets hired to track down a businessman suspected of embezzling from his business partners, things seem to be looking up. All he has to do is find the fugitive -- while ducking the Mafia, a trigger-happy outlaw motorcycle gang and a federal prosecutor who wants to throw him in prison for interfering with her case.

Will Burial succeed in finding the Judas he is tracing or will he end up betraying his own threadbare code of ethics? Cross is piled on double cross as the body count climbs in William E. Wallace's crime thriller, The Judas Hunter.
Read more
Other Formats: Paperback 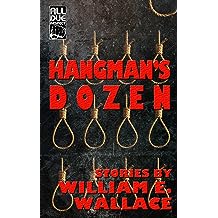 Hangman's Dozen Jan 19, 2016
by William E. Wallace
( 6 )
$2.99
William E. Wallace is serving up bare-knuckle stories in old-school style. Superstitious criminals down on their luck, junkies with trigger fingers, mysterious drifters—these are the kind of characters you’ll meet in this collection of lurid tales.

“(Wallace) is a master at building scenes, characters, layering dialogue and description, and filling in back-story with no interruption to the momentum of the story.” Greg Barth, author of Selena and Diesel Therapy

“The best of William E. Wallace’s work revolves around the concept of justice. . . I’m talking the big, broader cosmic sense. Judgment. Reckoning. Down in the filth and garbage of the street, it’s all street justice.” Joe Clifford, author of Lamentation and December Boys

“It is not easy to combine humor, characterization, and persuasive action but here it's done well. These stories will make you a Wallace fan." Patti Abbott, author of Concrete Angel

“Wallace is quite simply a brilliant writer.” Will Viharo author of Love Stories Are Too Violent for Me 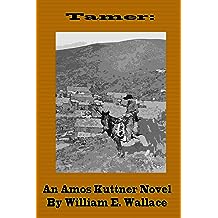 Tamer: An Amos Kuttner Novel May 19, 2013
by William E. Wallace
$2.99
Infantry Captain Amos Kuttner, a specialist in unconventional combat who spent twenty years fighting Mexicans and Indians on the American frontier, leaves the U.S. Army to roam Gold Rush California at the end of the Mexican-American War. When Kuttner is hired by the territory's last military governor as a "Tamer," a special law enforcment agent probing the murder of miners in an isolated part of the Gold country, he learns of a sinister plot that endangers the entire United States.

Part Western, part detective yarn, part spy novel, William E. Wallace's "Tamer" takes readers on an action-packed and intrigue-ridden tour of the violent and lawless California territory, an untamed region infested by Barbary Coast cut-throats, renegade U.S. soldiers and assorted gunmen and outlaws. Will the governor's newly-hired "Tamer" save the 1849 Constitutional Convention that will bring California statehood or will he fall victim to the plotters' bullets? Read Wallace's latest book, "Tamer: An Amos Kuttner Novel," to find out.
Read more 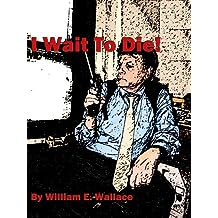 I Wait to Die! Apr 13, 2013
by William E. Wallace
( 2 )
$1.99
A femme fatale named Janice cooked up the Redi-Money heist, a scheme to steal millions of dollars from a lightly guarded check-cashing center; on the surface, it sounded like the score of a lifetime. But then dead bodies began piling up and the only question that remains is: whose lifetime are we talking about. . .and who, exactly, is keeping the score?

Sometimes the stakes are so high that a crime seems too good to be true.

That's the way it was when a man named Frank returns to Oakland from Colorado to organize the multi-million dollar robbery of Redi-Money, a check-cashing outfit that caters to down-and-outers.

Just to complicate things, the heist is the brainchild of Janice, the "fiance" of Frank's best friend, and she's a siren who oozes sex from every pore and seems to be dead set on pitting Frank's crew members against each other.

Add a crooked cop to the mix, and a payoff too good to be true and you have the ingredients for disaster.

"I Wait to Die!": A crime novella by William E. Wallace.
Read more
Other Formats: Paperback