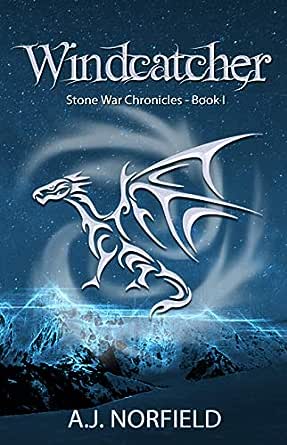 You've subscribed to Stone War Chronicles! We will preorder your items within 24 hours of when they become available. When new books are released, we'll charge your default payment method for the lowest price available during the pre-order period.
Update your device or payment method, cancel individual pre-orders or your subscription at
Your Memberships & Subscriptions
There was an error. We were unable to process your subscription due to an error. Please refresh and try again. 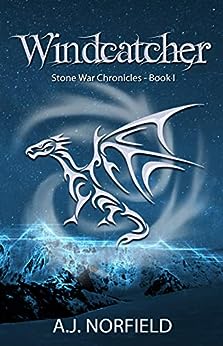 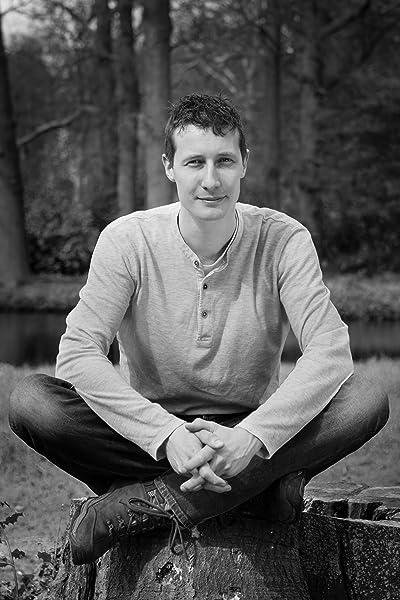 Windcatcher (Dragon I): Book I of the Stone War Chronicles Kindle Edition 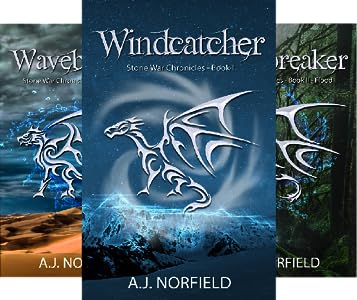 "The writing is effortless in its liveliness, describing the world that Norfield created easily and imaginatively. Windcatcher is the cross-generational book a reader of any age can devour and fantasy fans will find it a satisfying read." - Readers' Favorite (5/5 stars)
"Windcatcher is what epic fantasy should be, filled with action and edge of your seat tension along with heartbreaking moments, moments of simple smiles as a dragon comes of age and assumes the role of warrior alongside his saviors. A.J. Norfield has told his tale in true to fantasy style, overlooking and describing each scene with clarity and just the right amount of detail. Feel the winds, the heat of battle, the arduous journey and watch as time goes by, hour by hour, mile by mile. Endure each battle, the sacrifices made and understand just how evil and small-minded people can be. Face it, humans are flawed and never is that more obvious than when good battles evil and evil remains slightly veiled." - Tometender (4.5/5 stars)
"The book's action-packed and fast-paced, set in a richly-developed world, culture and scenery. It's a tense adventure with some lovely relationships, all framed by a conflict that's becoming a lot bigger than any of the characters anticipate -- if you like classic action fantasy with dragons and adventure, you'll definitely like this" - SFFWorld

A.J. Norfield lives with his loving family on land, but below sea level. He tries not to worry too much about climate change and the melting of the polar ice caps. His wife, and two rascals of children, keep him engaged and grounded in life, as he writes the nights away.

Whilst he is a long time story creator, 'The Stone War Chronicles' series is A.J.'s first official undertaking into the world of publishing. His books show influences from nature, conservation and the traveling he does around the world, as well as every day things like family, sports and a simple moment enjoying the sun.

As a reader, A.J. Norfield enjoys books from the likes of Anne McCaffrey, Terry Goodkind and Naomi Novik--to name only a few of many--which also inspired him to create his own world of fantasy and the people (and dragons) within it.

4.4 out of 5 stars
4.4 out of 5
32 customer ratings
How does Amazon calculate star ratings?
Amazon calculates a product’s star ratings based on a machine learned model instead of a raw data average. The model takes into account factors including the age of a rating, whether the ratings are from verified purchasers, and factors that establish reviewer trustworthiness.
Top Reviews

Amazon Customer
5.0 out of 5 stars !spoiler alert!
Reviewed in the United States on August 18, 2017
Verified Purchase
Okay people, paint me impressed. I'm not that much familiar with dragons, but as far as my experience goes, this book was a pretty good one. I loved how Galirras grew up during the story, how much he learned about himself and the world. And that he used air instead of fire. I loved the forest settlement too, where people walked on trees. I would have been frightened to do so, but the concept is awesome!

The characters were well built, the pace was good, there wasn't a moment where I felt bored. I'm looking forward to read the next installment in this series. And damn the author for killing Gavin. That one hurt... Not that I wasn't surprised, someone was bound to die sooner or later besides those who already fell at the beginning, but still. Why Gavin???

All in all, I can't say a bad thing about this book, and believe me, I am pretty critical. My advice? Go and buy this book NOW!
Read more
Helpful
Comment Report abuse

Amazon Customer
5.0 out of 5 stars Norfields writing guided my fantasy, instead of directing it.
Reviewed in the United States on March 1, 2017
Verified Purchase
For my first fantasy book ever (don't ask) I wanted to try something else than one written by well known authors. It never hurts to give something (someone?) new a chance, right? A bit of searching later I came across Windcatcher by A.J. Norfield. It ticked the boxes just fine. Dragons? Check. Good reviews? Check. Young and aspiring author? Check. Time to take the plunge.

I found the story very interesting and the way Norfield described the characters, emotions and the world it took place in just right. No needlessly long descriptions, but extensive enough to create for an immersive read that I finished in just a few days. Norfields writing guided my fantasy, instead of directing it. I liked that bit of creative freedom.

Windcatcher was a superb read and I can recommend it to anyone. How it compares to the Pratchetts and Tolkiens of this world? I wouldn't know. I can read some of those while waiting on the second book by Norfield. Hopefully the wait won't be too long!
Read more
One person found this helpful
Helpful
Comment Report abuse

Claudia Riggs
5.0 out of 5 stars AMAZING
Reviewed in the United States on April 16, 2017
Verified Purchase
I so want to safely journey back in time to experience the wonderment! Very well written so clearly describing Everything! It has been like watching a movie in my mind! If you love dragons don't miss the beginning of the series, guaranteed that I will continue the journey of these brave Souls!
Read more
One person found this helpful
Helpful
Comment Report abuse

L Kay
4.0 out of 5 stars Very enjoyable read!
Reviewed in the United States on June 28, 2017
Verified Purchase
This was a fun read, and I enjoyed the characters a great deal. Love the sweet dragon and his companion Raylan, and of course, found myself rooting for them against the evil Corza. I took away a star only because there were several errors that need to be cleaned up. I'm definitely planning to read Book II.
Read more
Helpful
Comment Report abuse

Elisabeth Hunt
5.0 out of 5 stars I love the dragon, and this book!!
Reviewed in the United States on January 26, 2016
Verified Purchase
If you like dragons, you will love this book. The dragon (Galirras) who hatches and grows with his "people" is great and you can imagine him sitting beside you. The story is epic and you will be invested in Raylan and the other characters and their war. I cannot wait for the second installment. Exceptional work, especially for a new author.
Read more
One person found this helpful
Helpful
Comment Report abuse

Amazon Customer
5.0 out of 5 stars This is a great fantasy book
Reviewed in the United States on April 26, 2016
Verified Purchase
This is a great fantasy book. The author really has the ability to draw you into the story in the way that he creates the characters. It is a fantasy that takes place in mid evil times so there is some violence, wars and greed. Probably for teens and older. I am not a big fan of fantasy book but I loved this one. Very well balanced. I will definitely read the next one.
Read more
One person found this helpful
Helpful
Comment Report abuse

Zak Showell
4.0 out of 5 stars A marvellous start to an fantasy chronicle
Reviewed in the United Kingdom on March 2, 2017
Verified Purchase
I read this following a recommendation from a friend and am thoroughly impressed with A.J Norfields sophomore effort. The book is very well paced, with some marvelous set pieces full of tension that kept me turning the pages. Norfields description of action is incredibly tactful, verging on visceral at times, grounding the fantasy is a very real world which he's follows through with very well developed characters who you grow to care about. This is a fantastic start to what will no doubt become a marvellous fantasy chronicle.
Read more
One person found this helpful
Helpful
Sending feedback...
Thank you for your feedback.
Sorry, we failed to record your vote. Please try again
Report abuse

Amazon Customer
4.0 out of 5 stars A detailed and engaging read
Reviewed in the United Kingdom on April 17, 2016
Verified Purchase
A detailed and engaging read that provides the reader with a new world, characters and mythology. You can see influences from Anne McCaffrey in the dragon lore and Jim Butchers Codex Alera in the combat sequences but Norfield has made this world his own. The relationships between the main characters are well drawn and make you want to find out what happens next for Raylan, Galirras and their friends.
Read more
One person found this helpful
Helpful
Sending feedback...
Thank you for your feedback.
Sorry, we failed to record your vote. Please try again
Report abuse

Amazon Customer
5.0 out of 5 stars Five Stars
Reviewed in the United Kingdom on July 1, 2016
Verified Purchase
Great book, looking forward to the next episode
Read more
Helpful
Sending feedback...
Thank you for your feedback.
Sorry, we failed to record your vote. Please try again
Report abuse

Amazon Customer
5.0 out of 5 stars Fast paced action while creating a new world
Reviewed in the Netherlands on July 16, 2017
Verified Purchase
I get bored realy fast, but reading Windcatcher was a blast. This book almost drags you into the fights while reading, but also the rest of the journey keeps your mind entertained. A lot of authors can create wonderful story's, but only a few can create new worlds like the one in this book. I think Windcatcher delivers a very solid base for the rest of the coming books. Hopefully those will let us meet even more interesting characters and visit amazing locations.
Read more
Helpful
Sending feedback...
Thank you for your feedback.
Sorry, we failed to record your vote. Please try again
Report abuse