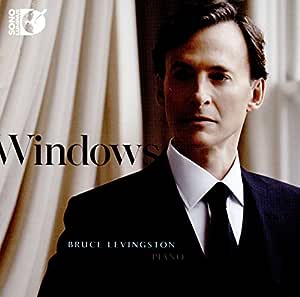 BRUCE LEVINGSTON (Artist) Format: Audio CD
5.0 out of 5 stars 5 ratings
See all 2 formats and editions Hide other formats and editions
Includes FREE MP3 version of this album.&nbspProvided by Amazon Digital Services LLC. Terms and Conditions. Does not apply to gift orders.&nbspComplete your purchase to save the MP3 version to your music library.
Available at a lower price from other sellers that may not offer free Prime shipping.

The title of pianist Bruce Levingston s haunting new album,Windows, is taken from the beautiful suite by acclaimed American composer James Matheson, heard here in its world premiere recording. This evocative, richly-colored work depicts the exquisite stained glass windows of Marc Chagall and Henri Matisse inspired by ancient imagery and scripture. These works, which reflect a myriad of overlapping artistic influences, led Levingston, an artist known for his cutting-edge programming, to seek out other composers who have been inspired by multiple art forms. Schumann was an immediate choice. His intimate Kinderszenen, a series of distilled little jewels that offer fleeting glimpses of childhood, is paired with the urbane, elegant Arabeske. Distinguished British-American composer David Bruce is also heard here in the premiere recording of his touching work, The shadow of the blackbird, inspired by the music of Schumann as well as the moving poetry of Wallace Stevens. It seemed fitting for Levingston to program these three inspired, and inspiring, composers together. Their works, old and new, represent aural windows through which their extraordinary visions may be heard, sensed and felt. Bruce Levingston is one of the today s celebrated figures in contemporary classical music. The New York Times named his album Heavy Sleep a Best Classical Recording of the Year praising his mastery of color and nuance ." The New Yorker has called him a force for new music with a gift for innovative and glamorous programming.

The impeccable command for which Levingston's become known are again evident, this time in an inspired set-list that achieves a satisfying rapprochement between old and new if, that is, it's fair to brand Schumann's timeless works old....The range of emotional expression and technical command he demonstrates in this performance is exceptional. --Textura February 2018

Beautiful...Not since Horowitz played this as the encore in his 1986 Moscow concert near the end of his life, have I heard such playing. Words completely fail. Levingston brings this approach to the whole piece and thereby creates something quite unlike anything recorded of late. --The Whole Note March 2018

It s [ David Bruce s Shadow of the Blackbird ] a fascinating piece...Levingston s crisp, no-nonsense keyboard approach brings out the work s fascinating structure as well as its strange undercurrent of darkness. It is here, and in similar other moments in the album, that Levingston shows his mettle as an artist, evoking an otherworldly mood without slipping into banality. Levingston also plays the familiar Kinderszenen with a delicate touch, reminding me in some respects of the classic performances that Clara Haskil gave of this chestnut back in the 1950s. Matheson s Windows is an exciting, interesting modern work. --The Art Music Lounge March 2018