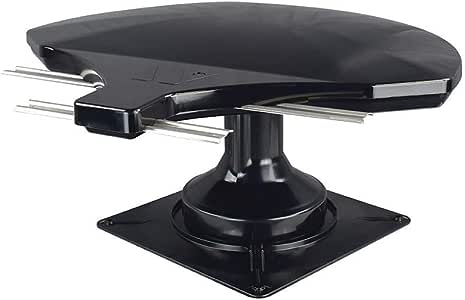 Rayzar z1, Winegard’s next generation in digital and HD broadcast TV RV antennas that delivers Crystal Clear HD quality programming and 4K UHD (where available).Rigorously Tested – Tested through shock and vibe, humidity and temperature, and wind tunnels for use in typical RV conditions.

A. The Rayzar z1 is Winegard’s newest off-air digital TV antenna for RVs.

Q. What capabilities does the Rayzar z1 have?

Q. How is the Rayzar z1 installed?

A:The Rayzar z1 is permanently mounted to the roof of your RV, similar to how the Winegard Sensar antennas are installed.

Q. Is the Rayzar z1 compatible with the Sensar lift assembly?

A:Yes – the Rayzar z1 is sold both as a complete unit and as the antenna head with adapter. This will allow a consumer to retrofit a Sensar lift with the Rayzar z1 antenna with a quick and easy process. The Rayzar z1 is also compatible with the existing Sensar’s wiring and power supply.

Q. How is the Rayzar z1 operated?

A:The Rayzar z1 is operated by an interior rotation handle assembly. It must be turned towards the broadcast tower locations. A channel scan must then be run on the television to scan in channels received.

Q. What channels can the Rayzar z1 receive?

FOX, NBC, PBS) plus additional networks (Qubo, ION, The CW, This TV, MyNetworkTV, Azteca, Telefutura, Univision, and Telemundo). The Rayzar z1 antenna can also receive local news, weather and educational programs that satellite and cable don’t offer. Availability may vary based on location and distance from the broadcast tower.

Q. Does the Rayzar z1 antenna work with any TV?

A:The Rayzar z1 works with any TV or device that has an ATSC tuner. Devices that may have built-in ATSC tuners include TVs, laptops, PCs, some satellite receivers, and digital recording devices (DVRs).

Tip: Any television manufactured after March 1, 2007 is required by U.S. government to have an ATSC tuner.

If your TV menu has an option for scanning for digital channels, then your television has an ATSC tuner.

Q. Will the Rayzar z1 work with an analog television?

A: A large majority of over-the-air signals are now digital – the antenna does not differentiate between digital and analog signals. However, for an analog TV to work with a Rayzar z1, a digital-to-analog converter box must be used in conjunction with the antenna.

Q. Can the Rayzar z1 be connected to multiple televisions?

A:Yes. The Rayzar z1 antenna can connect to multiple televisions through the wall plate/power supply that comes with the unit (or is from an existing Sensar).