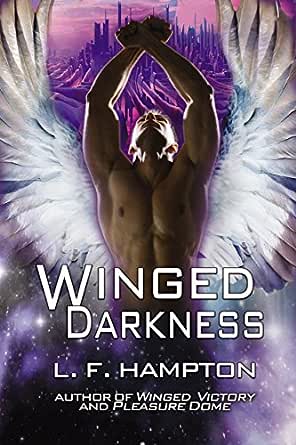 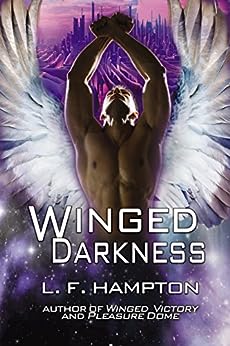 melindeeloo
4.0 out of 5 stars Still love the wings and the touch of paranormal, and love the darker hero in this sci -fi romance sequel
Reviewed in the United States on April 21, 2011
Verified Purchase
Winged Darkness picks up seven years after the first book,  Winged Victory , the Valtar world is now closed completely to outsiders. With her ship is in distress, Mona makes a forbidden emergency landing and seeks the help of the Valtaire ruler, Zurellious, hoping that since the reason her ship is damaged and the cargo that she carries both have a personal connection to Zurellious, she will be able to obtain his help. And Mona ends up getting way more than she bargained for in the fierce, winged, blood drinking Zurellious.

After being quite taken with its predecessor Winged Victory, I just had to read the sequel, Winged Darkness. I enjoyed the story with its darker hero Zurellius, who is solitary,and glorius with a barely leashed hidden predatory nature. His 'alien' heroine Mona - whom he calls 'hawk' - as a 'warrior' herself, is well suited to Zurellius. However, as a heroine Mona suffers a bit in that her focus is so bent on gaining revenge for the deaths of many people on her home colony world, including her husband and young son, that she does things which are really stupid - something that always bugs me in a heroine. This and the fact that the results of the big discovery in the previous book undoes some of the world building related to Zurellius' people, the Valtaire, that grabbed me in the first book - such a huge cultural shift in a mere seven years, when there are still way more males than females didn't feel quite right to me - meant that Winged Darkness didn't knock Winged Victory out of its spot as my favorite book in the series. (Also as a FYI, in Winged Darkness, author Hampton ups the sensuality of the romance a couple of notches from mild to moderate.)

Still I did enjoy Winged Darkness, and I loved Zurellious almost as much as his gentler brother Traveen. And there are still plenty of other characters, who I would happy read about should Hampton decide to offer more from this series.
Read more
One person found this helpful
Helpful
Comment Report abuse

Sophia Rose
VINE VOICE
4.0 out of 5 stars Much Anticipated Sequel Was Worth It! Well-written Sci-Fi Romance
Reviewed in the United States on October 11, 2016
Earlier this year, I read the first book in the series, Winged Victory, and was captivated by the worldbuilding, the plot, and the characters. One character stood out starkly against the page, Zureillius, the oldest brother. Dark, powerful leader of the Valtar people- a winged vampiric alien race. I was eager for more of his story and was thrilled to see that there was a sequel.

Winged Darkness begins about seven years after the end of the first book. The unthinkable has happened. Traveen and Abbie found peace on an isolated planet and invited others to join them and help colonize it. An addictive illegal quartz is found drawing the attention of blood-thirsty pirates who decimate the world.

A rag tag group of survivors led by Captain Mona de'Lacy journey in a limping ship across space, tracking the pirates who killed or captured their families even as Mona leads them to Valtar, the isolated world of Traveen's people for help. Mona knows the risks because the planet is closed to outsiders, but she is desperate. Revenge is all that drives her now. Her son and husband, her friend's child, many others. Dead. Her best friends enduring capture and worse with the pirates. She needs help. And Traveen told her that if things got bad that she was to go to his brother, Zuruillius, the dark ruler of the Valtar.

Zureillius has done the unthinkable and broken the laws of his people. He consumed prohibited blood that has changed him. He is now a powerful ancient barely able to control the wild, volatile nature that comes with the great power and strength. He got his whole family to safety in exile, he saw his brothers find love, and his sister happiness. He is alone. The council plots intrigue against each other and him. He is tired. Zureillius never wanted to rule, but has done his duty to bring his people back from extinction through the secrets Traveen and Abbie gave him.

Now, Zureillius has a determined and courageous human woman consumed by grief and revenge and the young, adorable niece that he never knew he had seeking his protection. Both their lives and the others are at stake, but their mission becomes his own. He will rescue his brother and his brother's wife and he will help his 'Hawk', Mona, achieve her desire.

Mona only wants to feel ice cold and have no emotions to keep her on task and focused, but the male Valtar who insists on coming along and working as her partner is a temptation. She pushes him away and resists as hard as she can, but they both know she is not being honest. Zureillius is convinced that even if he could win over the ghost of Mona's husband for her affections, that he is too far gone into the crazed darkness of his blood thirst to be safe.

Alright, I was glad to get this sequel and I loved Zureillius. He was as dark and tortured as I could want fighting his own internal war while also working to fight for and protect the others in his care. He is the one who sacrifices and is responsible, always, now it is his turn to get some happiness.

But here's the thing. I wasn't real impressed with Mona, Z's love interest. Mona is so up in her head about her grief, her guilt, her needs that she stupidly rushes into things and puts herself and others in danger multiple times. And like other books, this heroine has a tendency to hit and get rough which is supposed to prove she's a tough gal or something, but no, use your words, ma'am. And don't send mixed signals if you don't want to be pursued and touched. Yeah, she got jealous and harpy like at the same time told Z that she didn't want him and she was a cold block of ice. And that was the funny part. This chicky was not once the cold, emotionless being she kept telling herself and others she was. Sorry, hot head is more the apt description.

Now, that said, I didn't hate her. This book was well-written, exciting, and there was plenty of other good stuff going on to keep Mona's issues from being a determining factor. As I noted before, it's in the same world as the author's earlier series, Kasara's Children. I loved the inclusion of those characters along with Zureillius' extended family.

I thought the conflict with the pirates went by quickly after the long anticipated confrontation, but it was still intense and action-packed. The focus was definitely on the character and romance development, but not devoid of action. There were side plots and trails that I would love to see pursued in an ongoing series.

All in all, this is well-written sci-fi romance more on the sweeter end of the spectrum, but not lacking for development both in the sci-fi world building or romantic characters.

I received this book from Net Galley in exchange for an honest review.
Read more
Helpful
Comment Report abuse

I enjoyed the story, but the part of creating a heir just doesn't feel right. I hope there will be a reason for this "heir" in future books.

I voluntarily read and reviewed a copy of the book that I received through NetGalley.
Read more
Helpful
Comment Report abuse

Sony
4.0 out of 5 stars Sexy winged bloodsucking space angels...
Reviewed in the United States on November 3, 2016
***I voluntarily received this ARC from Bell Bridge Books through NetGalley for an honest review.***
I enjoyed this story; I found it very detailed and even though I did not read the first in the series, “Winged Victory”, I did not get lost in the story. I liked that this story had winged bloodsucking space angels, yep that’s a lot to take in. This book also has revenge, lots of action, some humor, and a bad ass heroine to boot. I would love to see another book written for this series so you know the outcome of other characters, as I tend to get a little attached. I would consider the sexual scenes to be moderate, not many but you’ll have to read to know what happens.
Read more
Helpful
Comment Report abuse
See all reviews from the United States

Kindle Customer
4.0 out of 5 stars love conquers or at least gets the happy ending
Reviewed in the United Kingdom on May 22, 2013
Verified Purchase
Having read other books by L.F. Hampton, I thought I would try this one as well! I'm glad l did, if you like science fantasy mixed with romance thats not too intense then give it a try.
Read more
Helpful
Sending feedback...
Thank you for your feedback.
Sorry, we failed to record your vote. Please try again
Report abuse