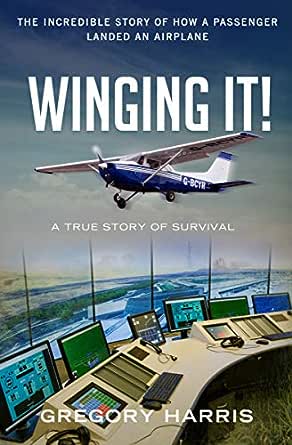 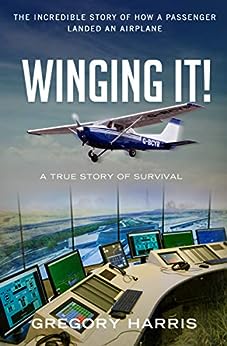 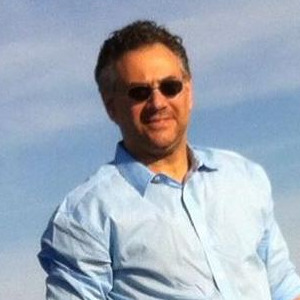 Winging It!: The True Story of How a Passenger Landed an Airplane Kindle Edition

"Asking the guy on the radio in control of an aircraftwhether he has 'done any flying before' is not the best part of any AirTraffic Controllers day. The whole evening continued toseesaw between, success and failure, hoping for the best, but deep downknowing the odds were stacked against John"
"Winging It! is a wonderful narrative into one of aviation's unique events."
- John Cameron, Air Traffic Controller - Humberside Airport

MB Chap
5.0 out of 5 stars Amazing story and fun, quick read
Reviewed in the United States on July 3, 2019
Verified Purchase
I had relatively low expectations when I first picked it up, especially when we know how it ends, but Mr. Harris does a wonderful job keeping us on the edge of our seats during this incredible tale of courage, brains and raw guts. This was a major story in England, and I am wondering how I had never heard this story before? Mr. Harris is a wonderful story teller and the writing is well crafted, especially for a first time author. In the vein of classics like "Into Thin Air" and "The Perfect Storm", Mr. Harris puts you in the middle of the action and you feel every harrowing decision as it's being made. Mr. Harris takes you into the cockpit, the ground crew, the rescue team and you understand each element that went into the entire operation. John Wildey is a phenomenal protagonist and we are happy to root for his success throughout the book. It's a tale you would never believe if it didn't actually happen, and it happened. Thanks to Gregory Harris for helping to bring it to America's attention.
Read more
Helpful
Comment Report abuse

Ramona
4.0 out of 5 stars Winging it!
Reviewed in the United States on May 27, 2019
Verified Purchase
An amazing read! With a dead pilot and no knowledge how to fly a plane, this story portrays the courage and willpower of the passenger to fly the plane and land it safely. Obviously without help from a fly instructor giving instructions from the ground, things might have turned out quite differently ... an incredible feat!
Read more
One person found this helpful
Helpful
Comment Report abuse

DavidG
5.0 out of 5 stars Amazing story!
Reviewed in the United States on June 14, 2019
Verified Purchase
Really enjoyed reading this amazing story. The author did a great job explaining everything so a novice like me was able to understand what was happening. I didn’t want to put the book down.
Read more
Helpful
Comment Report abuse

Amazon Customer
5.0 out of 5 stars Well done. Easy to read in one sitting
Reviewed in the United States on June 1, 2019
Verified Purchase
Your book is keeping me on the edge of my seat and I am really enjoying it. It is so well presented I feel as though I’m there. I can relate the him white knuckling the yoke. I did that on my flight lesson. Once I started to read it I couldn’t put it down.
Read more
Helpful
Comment Report abuse

noel sirrah
5.0 out of 5 stars amazing story written to keep you on the edge till done
Reviewed in the United States on June 17, 2019
Verified Purchase
the story is amazing and it is written by someone that obviously knows flying. it was technical yet easily understood and kept you on the edge of your chair till it is over.

Edward B. Roberts
3.0 out of 5 stars Amazing story
Reviewed in the United States on July 26, 2019
This is an amazing story of a man’s courage and wit. It is about three times too long because of the author’s attempt to explain aspects of flying he does not understand. There are many errors in those explanations. The story is worth reading if you haven’t heard of it previously.
Read more
Helpful
Comment Report abuse

Steven H
5.0 out of 5 stars "Riveting!"
Reviewed in the United States on June 16, 2019
Riveting... What a great book! Keeps you on the edge of your seat throughout. Even though we know this passenger with no flying experience successfully landed the plane, its in incredible story as to how he did it, and the support of the ground crew and helicopter assistance that talked him through. The author’s knowledge of flying small airplanes and layouts of private airport runways made it very insightful. I even learned a few new terms. Very fast read. You wont put this one down, until he gets the plane down.
Read more
Helpful
Comment Report abuse
See all reviews from the United States

Mr. J. A. F. Cameron
5.0 out of 5 stars A gripping and enthralling read
Reviewed in the United Kingdom on May 17, 2019
Verified Purchase
It is often at the darkest times that a person fortitude shines brightest. This well written narrative, researched using a variety of sources, such as local media reports and personal contact, provides a thorough timeline of the unfortunate events when a passenger of a light aircraft, with no flying experience has to take control of the four seater aircraft after the pilot collapses during the flight.
A gripping read tells of the experience of the passenger, the RAF search and rescue team despatched to help, and the people on the ground utilising all available resources to effect what they hope will be a successful outcome.
Nothing is ever clean cut in aviation, with fading light, and aborted approaches, the passenger, now the pilot, attempts to get the aircraft, himself and the unconscious pilot on the ground.
Read more
One person found this helpful
Helpful
Sending feedback...
Thank you for your feedback.
Sorry, we failed to record your vote. Please try again
Report abuse