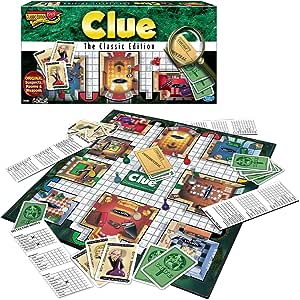 And which of the six weapons was used to commit this dastardly deed (the wrench, the rope, or maybe the trusty ol' lead pipe)? Collect the right clues, make the right deductions, to determine who, where, which weapon, and you will solve the mystery and win the game.

The suspects you know, in the mansion you remember, with the implements you love are all included! For generations, Mr. Boddy has met his end at the hand of one of six legendary suspects in the classic detective game, CLUE. Professor Plum, Mrs. White, Mr. Green, Mrs. Peacock, Miss Scarlett, and Colonel Mustard are all here in Boddy Mansion. One of them has done away with Mr. Boddy, but in which of the nine rooms? (Perhaps the Library, or Lounge, or Conservatory)?

4.8 out of 5 stars
4.8 out of 5
1,343 global ratings
How are ratings calculated?
To calculate the overall star rating and percentage breakdown by star, we don’t use a simple average. Instead, our system considers things like how recent a review is and if the reviewer bought the item on Amazon. It also analyzes reviews to verify trustworthiness.

BlovesH
5.0 out of 5 stars Classic Clue!
Reviewed in the United States on December 28, 2016
Verified Purchase
I've wanted to purchase this game for years, but, because my husband and I have no friends, we didn't meet the 3 players minimum requirement. You can imagine my delight when our oldest son turned 9 this year. Finally, having kids paid off! We played 3 games back-to-back on Christmas Day. Despite my son's constant pleading to instead play on his new Xbox, I think he secretly loved it.
Read more

5.0 out of 5 stars Classic Clue!
By BlovesH on December 28, 2016
I've wanted to purchase this game for years, but, because my husband and I have no friends, we didn't meet the 3 players minimum requirement. You can imagine my delight when our oldest son turned 9 this year. Finally, having kids paid off! We played 3 games back-to-back on Christmas Day. Despite my son's constant pleading to instead play on his new Xbox, I think he secretly loved it.
Images in this review

P. Kingsriter
5.0 out of 5 stars A Classic: Solving Murders For 50 Years
Reviewed in the United States on October 24, 2010
Verified Purchase
Clue is one of those transcendent games that's maintained it's viability for over 50 years. Why? It still feels fresh and is flat-out fun to play.

Here's a quick synopsis for the unfamiliar: There's been a murder at the mansion and you're a character in a race to figure out who did it, what weapon they used, and which room the murder occurred in. Be the first to get your accusation right and you win the game.

The suspect, weapon, and room combo changes every game through a brilliantly simple process involving cards and a CONFIDENTIAL case file envelope. It takes about 5 minutes to set up and usually between 20 - 40 minutes to play. Clue can be played with as few as 2 people, but 3 - 6 is ideal as it adds layers to uncovering clues (without increasing the complexity). The game states it's appropriate for ages 8 and up, and my 8-year-old understands the concepts well enough to have lots of fun and often be competitive (if I leave my cut-throat self at the door). The learning curve for this game is really quick, especially if you have a seasoned player helping explain the rules. If not, don't worry. You'll be solving murders in no time.

The "Classic Edition" bills itself as having the "Original Suspects, Rooms, & Weapons". (There have been a few updated editions released that included extra weapons and rooms.) If you grew up on Clue or are familiar with editions released prior to 1990, this will very likely be the format you're familiar with. The character pawns are stained wood and all weapons are metallic. The only difference I detected from my 1980s edition was the artwork on the cards. It looks as though the manufacturer resurrected the original 1949 artwork as well, giving the game a very classic, whodunit-y feel. All in all, the stellar gameplay remains the same.

In addition to rating fun and durability at 5-stars, I gave Clue's educational value a 4-star rating. Why? This game effortlessly teaches logic and deductive reasoning. It may seem funny to be wholeheartedly recommending a game that centers around a murder as a wholesome family-friendly activity, but oddly enough, it is. The "murder" aspect of the game is very downplayed, almost an afterthought. The entire fun and point of the game comes from the discoveries of the "who", the "where", and the "what" details.

If you're looking for a fun board game to add to the collection, or relive some fond game-playing memories, I can't recommend Clue highly enough. And take it from me: Clue is best played on a dark and stormy night...

Vader540
5.0 out of 5 stars A perfect classic board game reproduction.
Reviewed in the United States on February 11, 2018
Verified Purchase
Thank goodness a "classic" version of Clue is out there. We had played a current version at a relative's house at Christmas time and they had clearly "dumbed down" the game in some ways and made it "politically correct" by eliminating "Mrs White." Seriously! If you remember and love the classic Clue game then this is the product you are looking for. It seems of good quality and all the game pieces and cards are just what you remembered them being. Now get out there and solve the mystery.
Read more
6 people found this helpful
Helpful
Report abuse

Sarah Duffer
5.0 out of 5 stars Metal weapons!
Reviewed in the United States on December 31, 2016
Verified Purchase
I love it, and the weapons are metal and look great. However it has a pistol instead of the revolver. The board folds once in half and is very shiny, clean and classic.
Read more

5.0 out of 5 stars Metal weapons!
By Sarah Duffer on December 31, 2016
I love it, and the weapons are metal and look great. However it has a pistol instead of the revolver. The board folds once in half and is very shiny, clean and classic.
Images in this review

HAPPYONE
5.0 out of 5 stars THIS IS THE CLASSIC LOOKING GAME OF YEARS GONE BY --HOORAY!!
Reviewed in the United States on November 18, 2014
Verified Purchase
THANK YOU AMAZON! JUST LIKE I REMEMBER MY FAVORITE GAME AS A YOUNGSTER. I had gotten a "Clue" game from Walmart, thinking it would be the same. NOT! To my horror, it was what Hasbro calls their 2014 Edition. You would NOT believe what they did to Col. Mustard, Prof Plum and Ms. Scarlett---made them modern day rapper,hooker looking characters. I took that back, and ordered this CLASSIC EDITION from AMAZON, and now have what Col. Mustard, Prof. Plum, Ms. Scarlett and Ms. White ARE SUPPOSED TO LOOK LIKE.
OH, YES, now I have the "original' rooms of the library, dining room, etc. The 2014 Edition had a car garage and other rooms that absolutely were not good!

DebK
5.0 out of 5 stars What a fun game for family or friends
Reviewed in the United States on September 13, 2017
Verified Purchase
It is a classic for a reason!! Every kid should grow up playing "CLUE". What a fun game for family or friends. I got my first one when I was 8 years old and it has always been one of my favorites. Now, after 40+ years, I am buying a replacement. Much prefer the paper game rather than the electronic version. Sitting around a table with friends and playing Clue encourages lots of chatter and lots of fun! And it is more of a thinking game than a game of chance. Your ability to solve the clues and find the killer increases with age and wisdom. Love it!
Read more
4 people found this helpful
Helpful
Report abuse
See all reviews

Ravrocks
5.0 out of 5 stars 5 stars all the way!
Reviewed in Canada on December 8, 2020
Verified Purchase
So happy to have found this! All of the Clue games I’ve found in stores are the newest updated editions that are missing so much of the classic gameplay. I can’t tell you how happy I was to find this! Arrived early, everything intact and exactly as described! Could not be happier! Thank you!
Read more
Report abuse

Amazon Customer
4.0 out of 5 stars I love this game
Reviewed in Canada on February 5, 2017
Verified Purchase
I love this game. My previous version was very used and it was time to order a new one. The game came with just a postage label placed on it, so the box was severely damaged during shipping. It would have been nice if it had been packed in a box to protect it. Further, the original version of this game came with six detective notepads. This version only comes with one. Six notepads were ideal as this game can have up to six players. The notepads come with a cardboard backing making it easy to write notes without other players seeing them. With there only being one notepad, each player will be given a torn off page and will have to figure out a way to make their notes discretely. This also means that you will run out of note pages rather quickly.
Read more
Report abuse

Michelle S
2.0 out of 5 stars Poor quality, high price
Reviewed in Canada on November 13, 2018
Verified Purchase
Oh dear, the box and board are paper. They sure don't make things like they used to. Really disappointed at the quality, ESPECIALLY for the price! I honestly considered returning it.
Read more
Report abuse
See all reviews