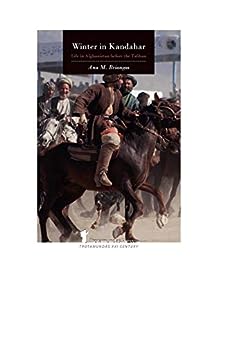 Winter in Kandahar: Life in Afghanistan before the taliban Kindle Edition

by Ana M. Briongos (Author) Format: Kindle Edition
See all formats and editions
Sorry, there was a problem loading this page. Try again.

In 1968, with Franco still in power, 21-year-old Ana M. Briongos left her native city of Barcelona for the first time and went to Afghanistan. Staying first in Kandahar, then in Kabul, it was not long before she fell in love with this fascinating country. Between 1968 and 1977, she would return there many times. In her quest for self-discovery, she encountered a cast of characters worthy of a novel, from street vendors in the bazaar to members of the country's ruling class and relatives of the Afghan royal family. Ana M. Briongos was also very privileged to be given a rare and intriguing glimpse behind the veil into the hidden world of Afghan women. "Winter in Kandahar" offers a personal recollection of an Afghanistan that no longer exists: that of the final years of a forty-year-old monarchy on the verge of collapse. The book provides an insight into Afghanistan's complex system of clans and tribes, as well as a compelling account of the country's troubled history. The friendships Ana Briongos cemented during those years are still very much alive; this book represents a tribute to the survival of friendship through adversity against a backdrop of adventure and intrigue.

Maggie
4.0 out of 5 stars More of history years ago
Reviewed in the United States 🇺🇸 on January 31, 2022
Verified Purchase
I met this woman and loved hearing about her life before the world changed. Really interesting characters that she met and lived with while traveling. Couldn't happen today.
Read more
Helpful
Report abuse

Cliente Amazon
5.0 out of 5 stars Life in Afghanistan before the talibans.
Reviewed in the United States 🇺🇸 on January 12, 2020
Verified Purchase
Life in Afghanistan before the Soviet invasion and the talibans. A peaciful and surprising country where a young european girl, the author, traveled and lived without problems. Very interesting to read, easy and exciting.
Read more
Helpful
Report abuse

Anna Alsina
5.0 out of 5 stars An unconventional trip through Afganistan
Reviewed in the United States 🇺🇸 on March 10, 2009
I thoroughly enjoyed this book. It was extremely interesting to read about the experiences of a young Spanish woman traveling by herself in Afghanistan during the 1960s. The book struck a perfect balance between narrating the author's personal experiences in Afghanistan and providing the reader with information about the country. The book effectively describes Afghan history, geography, tribal structure, political organization, and culture without being too academic. In this way, the book is very accessible for anyone interested in this part of the world. In short, A Winter in Kandahar provides an informative and entertaining look at Afghanistan from the perspective of a woman that quite literally takes the road less traveled and seeks out the unconventional. A foreign woman, alone, forty years ago in Afghanistan.
Read more
Helpful
Report abuse

H. Canonico
5.0 out of 5 stars SENSES AND SENSIBILITY OF WINTER IN KANDAHAR
Reviewed in the United States 🇺🇸 on February 4, 2009
"WINTER IN KANDAHAR" IS ONE OF MOST INTERESTING,LOVING,SENSIBILITY BOOK,ABOUT AFGHANY CULTURE IN CENTURY END 60" BEGNINING OF 70TH,THE AUTHOR ANA.BRIONGOS RELATED A VERY BEAUTIFUL STORY OF KINGS, DESERTS,FRIENDSHIP,HE MENTION HOW IS AFGANISTAN AT THIS MOMENT,SHE RELATED AN SPECIALL HUMAN LOVE MAN CALLED AHMED DESCOMBES I THINK PART OF THIS BOOK IS DEDICATED TO HIS MEMORY,REALLY WINTER IN KANDAHAR WILL TOUCH PART OF YOUR HEART BECAUSE IT WAS WRITTEN WITH SPECIAL SENSES.
I HAVE THE OPORTUNITY TO READ SPANISH WINTER IN KANDAHAR AND BOTH ARE FABOLOUSAND FANTASTIC BOOKS, SINCERELY ALEXANDRA VENEZUELA
Read more
Helpful
Report abuse

jm
5.0 out of 5 stars A European woman in Afghanistan
Reviewed in the United States 🇺🇸 on February 15, 2009
Whether or not you have read "The Kite Runner" and "A Thousand Splendid Suns", you should not miss this fascinating book in which the turbulence of Afghanistan between 1969-1977 is brought to us through the eyes of a young European woman. "Winter in Kandahar" is rich in personal experience, historical fact and humanity.
Read more
Helpful
Report abuse
See all reviews
Report an issue
Does this item contain inappropriate content?
Report
Do you believe that this item violates a copyright?
Report
Does this item contain quality or formatting issues?
Report