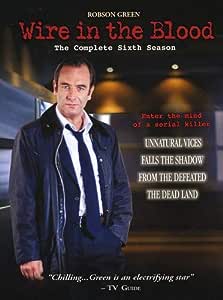 Add to Cart
$16.98
+ Free Shipping
Sold by: Screen Jewels
Have one to sell?
Sell on Amazon

Wire in the Blood: Season 6

Green, Robson (Actor) Rated:
NR
Format: DVD
4.7 out of 5 stars 103 ratings
See More
Available at a lower price from other sellers that may not offer free Prime shipping.

Based on the characters created by best-selling author Val McDermid

Dr. Tony Hill (Robson Green) is a clinical psychologist with an extraordinary understanding of the criminal mind. Working alongside Detective Inspector Alex Fielding (Simone Lahbib), Tony must race against time to profile and track down vicious killers before they strike again.

Disc 1: Unnatural Vices
Dr. Tony Hill investigates what appears to be the honor killing of a young Kurdish woman. However, the site where the body was found yields remains of other victims and an even more gruesome motive for the crimes.

Disc 2: Falls the Shadow
After several colleagues are murdered, Tony is arrested as the prime suspect. With time to ponder the ritualistic nature of the attacks, he finally finds a link with several recent prostitute killings.

Disc 3: From the Defeated
Tony becomes absorbed in a bizarre chain of murders in which each perpetrator in turn becomes the next victim, but the unusual modus operandi – always involving the same gun – remains identical.

Disc 4: The Dead Land
A killer starts dumping the bodies of homeless men in the financial district of Bradfield, leaving little evidence behind. Meanwhile, Tony fails to foresee the threat to his own life from a mysterious stalker.

4.7 out of 5 stars
4.7 out of 5
103 global ratings
How are ratings calculated?
To calculate the overall star rating and percentage breakdown by star, we don’t use a simple average. Instead, our system considers things like how recent a review is and if the reviewer bought the item on Amazon. It also analyzes reviews to verify trustworthiness.
Top reviews

aardvark
2.0 out of 5 stars AARDVARK
Reviewed in the United States on August 1, 2020
Verified Purchase
DIDN'T LIKE IT
Read more
One person found this helpful
Helpful
Comment Report abuse

Jack E. Levic
4.0 out of 5 stars GRIPPING YET UNNERVING & BRUTAL
Reviewed in the United States on August 1, 2011
Verified Purchase
It's series SIX of WIRE IN THE BLOOD and the Bradfield Police Department is still dealing with one serial killer after another. The murder rate is awfully high in this city. Psychologist Tony Hill comes to the rescue of the overwhelmed Bradfield Police Department. Robson Green is absolutely fantastic as the quirky and somewhat mysterious Dr. Tony Hill. While it is an exceptionally well-done police detective series, WIRE IN THE BLOOD is brutally unnerving in his explicit portayals of serial killings. It's not a series to watch alone. The gruesome killings are very graphic by American TV show standards.

Dr. Hill tries to get into the minds of the killers and to weed out suspects. Some are guilt of lesser crimes but our Dr. Hill sorts it out in the end. DEAD LAND is the final episode of the series. Detective Inspector Alex Fielding finally attempts to delve into Dr. Hill's personal life and seems to be showing some romantic interest. Surprisingly for this final episode, she is called away for much of the show. Another detective takes her place and he happens to be an immense fan of Dr.Hill. He was an interesting character to bring in the last episode...almost a Watson to Hill's Sherlock Holmes. Odd this new dynamic was entered in the last episode..though perhaps, at the time a Series Seven was planned.

WIRE IN THE BLOOD is a well-written and suspenseful show with constant plot twists. The obvious culprit rarely is exactly that. Only Dr. Hill can sort it all out. It's sad to see the series end, but there are plenty of episodes to enjoy. The violence is overly graphic at times. Be warned.

amazonmakesitright
5.0 out of 5 stars if you like weird stuff, this is for you
Reviewed in the United States on July 24, 2020
Verified Purchase
want no nonsense real down to earth weird crimes, THEN YOU HAVE COME TO THE RIGHT PLACE
Read more
Helpful
Comment Report abuse

B. Cooper
5.0 out of 5 stars Absolutely Great
Reviewed in the United States on August 1, 2009
Verified Purchase
Robson Green is back in the sixth and from what I found out final season of the amazing Wire in the Blood series. I have always preferred the UK crime/mystery programming over the bland U.S. shows. Season 6 is just as gripping and tension filled as the previous five seasons. The crimes are just as bizarre, violent and twisted as the previous seasons and I absolutely love it. Green is perfect as Dr. Tony Hill and Simone Lahbib is great as DI Alex Fielding. If you have see the previous five seasons of Wire in the Blood then season 6 will be exactly what you expect......one of the best crime series I have ever seen.
Read more
29 people found this helpful
Helpful
Comment Report abuse

K. D. Webber
5.0 out of 5 stars Too bad it's over!
Reviewed in the United States on September 30, 2009
Verified Purchase
This turned out to be the final season in the Wire in the Blood series; I believe the decision was made to cancel the series after this season wrapped, so there are a couple of things left hanging (like the relationship between Tony Hill and Alex). However, the inclusion of a multi-episode character and story (Michael) was a different approach and came off very well. Another excellent season; too bad the show's over!
Read more
9 people found this helpful
Helpful
Comment Report abuse

Denise Stoltenberg
5.0 out of 5 stars ITV needs to change its mind!
Reviewed in the United States on October 2, 2009
Verified Purchase
This simply cannot be the final season of "Wire In The Blood". Nope, I will not accept that.

The six seasons of the series have all been excellent in their execution by the actors, writers, directors, etc.

I hear that the US wants to adapt it for broadcast here, but how in the heck can you replace Robson Green, or indeed any of the wonderful cast? It cannot help but suffer in the transition to Americanization.

MJNoel
5.0 out of 5 stars Wire in the Blood: the complete sixth season
Reviewed in the United States on September 12, 2009
Verified Purchase
Robson Green is so easy to watch! The series is very good but very graphic so this I will not share with my family, but my best friend and I will continue to watch and continue to buy this series. We love almost all the British mysteries.
Read more
5 people found this helpful
Helpful
Comment Report abuse
See all reviews

Nicola S. Smythe
5.0 out of 5 stars NOT FOR THE FAINT HEARTED.
Reviewed in the United Kingdom on September 9, 2019
Verified Purchase
Another great ITV series. Good plot lines - some of them bordering on the macabre. Kept you guessing right to the end. One of the best.
Read more
Report abuse

Aremess
4.0 out of 5 stars Great, but much darker storylines
Reviewed in the United Kingdom on September 16, 2009
Verified Purchase
I like all of the series of "Wire in the Blood". This series holds up the excellent stories and acting. The stories in this series are, however, much darker and more gruesome than previous series.

Good value for money as they are the type of programme one can watch more than once and still gain from them.

One question that's bugging my wife and I, "Where does the title comes from?"
Read more
One person found this helpful
Report abuse

Gareth Davies
4.0 out of 5 stars Marvellous detective stories.
Reviewed in the United Kingdom on April 29, 2013
Verified Purchase
Robson Green is excellent in this series, which is full of good story lines and twists and turns. I missed most of the episodes when they were first broadcast, but now I can watch them as and when I want.

Da Parsons
4.0 out of 5 stars Wire In The Blood VI
Reviewed in the United Kingdom on September 1, 2009
Verified Purchase
If you enjoy the previous series then you will realise that not much changes and why should they change a winning formula? I find this a good set of stories linking with each other slightly, not brain taxing, but I am only asking this to entertain me, which it does
Read more
Report abuse
See all reviews