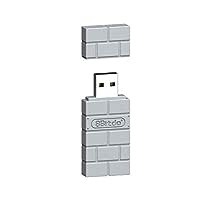 Visit the 8Bitdo Store
Platform : PlayStation
4.6 out of 5 stars 2,024 ratings
Available at a lower price from other sellers that may not offer free Prime shipping.
In Stock.
Arrives: Monday, Feb 1 Details
Fastest delivery: Friday, Jan 29
Order within 11 hrs and 24 mins Details
Sold by RunSnail and Fulfilled by Amazon.
New & Used (5) from $17.59 & FREE Shipping on orders over $25.00

Renowned for producing the highest quality retro controllers on the market, 8Bitdo’s controller line has been referred to as, 'a range of excellent retro-style game controllers' by The Verge.

Play your PS1 Classic Edition, wirelessly, with any PS4 controller.

With the 8BitDo Wireless USB Adapter, you can easily use PS4, Xbox One S, PS3, Wii Mote, Wii U Pro, Joycons and all 8BitDo controllers with PS1 Classic Edition, Switch, PC, Mac, Raspberry Pi and more.

4.6 out of 5 stars
4.6 out of 5
2,024 global ratings
How are ratings calculated?
To calculate the overall star rating and percentage breakdown by star, we don’t use a simple average. Instead, our system considers things like how recent a review is and if the reviewer bought the item on Amazon. It also analyzes reviews to verify trustworthiness.

Hallie
3.0 out of 5 stars PS3 controller works, but there's a TRICK that's needed.
Reviewed in the United States on January 6, 2019
Edition: GrayVerified Purchase
TRICK: Press SELECT+DOWN on your PS3 controller if you get the error stating the controller isn't connected. This will turn the controller off, and then you need to turn it back on and it should work. This changes the connection mode on the PS3 controller.

NOPE. Just like the review a couple posts down said, the system doesn't even recognize the controller is plugged in. This is after it's been paired.

I emailed 8bitdo to make sure I did everything correctly, and I did. I even tried both methods they gave me to install the software on Windows 10 (even though both methods paired fine) and neither method worked once I plugged the PS3 controller in to the Playstation Classic.

I emailed 8bitdo back stating ALL of this and they replied back "Hello there. You can try other systems". How can they list this product as supporting PS3 controllers when it clearly doesn't? I cannot recommend this for anyone trying to get a PS3 controller to work and I can't recommend this company after the lack of customer support I've received.

UPDATE: 8bitdo contacted me and finally showed me how to get this working. There's a "trick" that's needed to change the PS3 controller's "connection mode". After the error message comes up stating that the controller needs to be plugged into the port, press SELECT+DOWN (this changes the PS3's connection mode).. the controller will turn off, simply turn it back on and it should work.

Bobby Windham
4.0 out of 5 stars *Edited* Finally Got Dualshock 3 to Work Properly!
Reviewed in the United States on January 4, 2019
Edition: GrayVerified Purchase
Given my luck with 8bitdo on my SNES Classic, I was certain this would be a solid purchase. I have a couple of spare Dualshock 3 Controllers, and a PS Classic; so yeah. Wireless? Analog sticks? Sign me up!

I never hesitated to put in my pre-order.

That was a mistake.

I got the unit in the mail on Dec 31st, and since I was off work, I decided to try it out. I plugged the adapter into the console, turned it on and tried to pair my DS3 according to the instructions, but it wouldn't pair. I combed the internet for advice, and found the DS3 tool download. I downloaded that, and while using Google Translate on my phone to help me figure out what to do (because the program is in Japanese), I got the adapter and my controller paired.

I plugged the adapter into the console, turned it on, and once everything was loaded up, I turned on my controller. The blue light on the adapter is solid, as is the red LED in the #1 spot on the DS3, but the console says it doesn't recognize the controller. Hitting L1+R1+Select makes the controller rumble, and if you press that combo over and over again, it cycles through the strength of the rumble, but otherwise, the controller doesn't do anything; and to add insult to injury, the controller sporadically disconnects.

At this point, I haven't tried an XBOX One, or 360 controller, a Wii U Controller, or another 8bitdo product. I don't have a PS4 DS4 to test, but I don't want to buy one just for this either.

I was hoping this would work, and I was prepared to buy another one to compliment it, but not anymore.

Thanks to a comment on this review, a method was made known to me to make my DS3 function with the PS Classic. Once the controller has been paired with the adapter, and the PS Classic is on (Meaning the light on the PS Classic is Green, the light on the USB adapter is solid blue, and the light on the DS3 is solid red), Pressing "SELECT + DOWN" will turn the controller off, and pressing the "PS" button on the DS3 will turn it back on. Then you should have no problem. It worked for me, however, now there's a cursor near the top left of my screen. Hopefully, that will be remedied with a future firmware update, or by the modding community. It doesn't impact gameplay though.
Read more
24 people found this helpful
Helpful
Report abuse

Anthony Caruso
5.0 out of 5 stars Perfects the PS Classic!
Reviewed in the United States on December 31, 2018
Edition: GrayVerified Purchase
Works fantastic. This really makes the PS Classic complete. I can now use analog sticks in game! Couldn’t wait to get it in the mail and test it out and it far exceeds my expectations. Using with DualShock 4 controller. PS button is the “Reset Button” and L1 + R1 + Options brings up the Emulator Secret Menu.
Read more
25 people found this helpful
Helpful
Report abuse

Daniel Nery
1.0 out of 5 stars Cryptic instructions, unresponsive software, lazy design, crappy product.
Reviewed in the United States on January 11, 2019
Edition: GrayVerified Purchase
Unacceptable. There's no excuse for the poor performance of this piece of garbage. The design is just a color coated version of another product, so you know you're getting into something that they put ZERO effort into making. And that's a real shame because 8bitdo makes AMAZING controllers and adapters. But this one makes me lose faith in the brand altogether. $20, and instead of the easy plug and play and instant connection seen with the SNES adapter and controllers, this one comes with misleading instructions. You need to go hunting information down on the internet to find out how to sync your PS3 controller because contrary to them telling you to "just press the button on the adapter and on the controller and play", you actually need to download tools that also don't work. I have the latest mac and a windows 10. The 8bitdo receiver tool software's "update" button doesn't do anything on either computer that I open it up in. NOTHING works. I don't know how the other buyers figured it out but I've already wasted 2 hours of my life trying to figure out something that should NOT be this difficult. I'm totally disappointed and frustrated.
Read more
16 people found this helpful
Helpful
Report abuse
See all reviews

Amazon Customer
1.0 out of 5 stars Displays cursor icon on screen annoyingly
Reviewed in the United Kingdom on January 12, 2019
Edition: GrayVerified Purchase
Works fine on ps classic but stuck with a horrible mouse cursor icon on top left of screen. Can’t recommend this item due to that very disappointed seems like a rushed item. There fix is to remove and plug in the adapter once the ps classic has booted to game deletion menu. Very inconvenient. Let’s hope this is fixed in a future update. Still considering returning item as I won’t be using it
Read more
10 people found this helpful
Report abuse

wussel1979
5.0 out of 5 stars Works with Dualshock 4
Reviewed in the United Kingdom on December 31, 2018
Edition: GrayVerified Purchase
This is great, the analogue sticks work perfectly wirelessly with my Dualshock 4 controller, no apparent lag (not any more than with the standard controller anyway). It makes games like Destruction Derby controllable! This works on a totally standard Playstation Classic. Only downside, is the looks, pity it isn't smaller and looks like a Playstation Memory Card.
Read more
7 people found this helpful
Report abuse

Alan Clarke
4.0 out of 5 stars Ps duelshock 3 doesn't work out the box
Reviewed in the United Kingdom on June 21, 2019
Edition: GrayVerified Purchase
Got this so I could use my old PlayStation duelshock 3 controller, couldn't get it to work, had to watch a YouTube video of how to install special driver for it, also had to use 1.21 firmware, then it now works fine, guess it may work straight out the box for other controllers. Otherwise it works well, but would have been nice to have this information on/in the box, hence why no 5 star.
Read more
5 people found this helpful
Report abuse

John W
5.0 out of 5 stars Plug it in. Pair it. It works. Beautifully.
Reviewed in the United Kingdom on April 22, 2019
Edition: GrayVerified Purchase
This is an excellent device. The most taxing part is working out how to take the cap off! :) It's so well moulded that the crack is difficult to see. Tip: the instructions stuck to the device need peeling off first. Once you've penetrated the inner sanctum, stick it in and pair the controller and PlayStation Classic together. They'll hit it off straight away, and you'll be playing with a decent analogue controller.
Read more
4 people found this helpful
Report abuse

G
5.0 out of 5 stars Perfect companion for the PS Classic Edition
Reviewed in the United Kingdom on October 2, 2019
Edition: GrayVerified Purchase
I already had one of the 8bitdo controllers lying around and so when I received my PS Classic I immediately ordered this receiver as the leads on pads are too short for where I have things placed. This, for me at least, was literally plug and play. Pressed sync and that was it, connected and off you go. Like the SNES version, this also lets you access the in-game menu from the pad rather than having to go over to the console, which is not a life-changer but nice enough and justifies the expense somewhat as you get extra functionality beyond just the wireless convenience. Colour was a perfect match too, just had it over to someone as a puzzle to get the top off - it's very well concealed, although clearly just a 50:50 chance of getting it right first time, lol
Read more
One person found this helpful
Report abuse
See all reviews