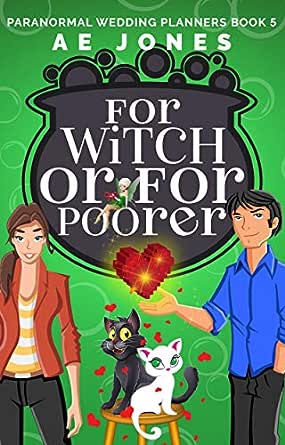 You've subscribed to Paranormal Wedding Planners! We will preorder your items within 24 hours of when they become available. When new books are released, we'll charge your default payment method for the lowest price available during the pre-order period.
Update your device or payment method, cancel individual pre-orders or your subscription at
Your Memberships & Subscriptions
There was an error. We were unable to process your subscription due to an error. Please refresh and try again. 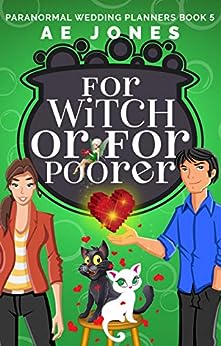 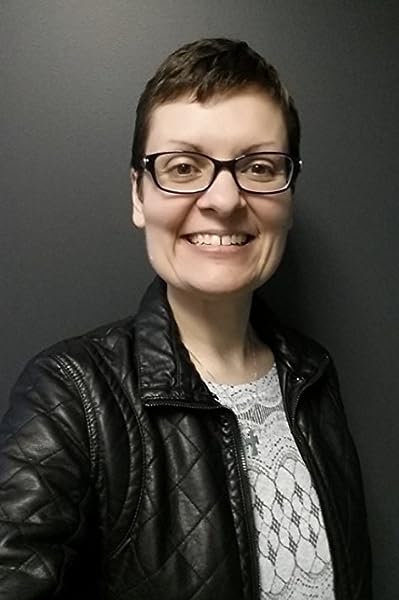 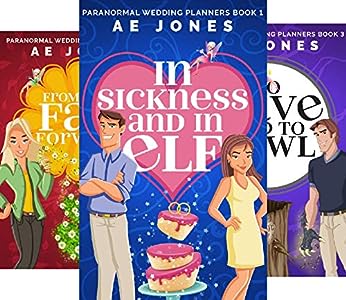 4.8 out of 5 stars
4.8 out of 5
38 global ratings
How are ratings calculated?
To calculate the overall star rating and percentage breakdown by star, we don’t use a simple average. Instead, our system considers things like how recent a review is and if the reviewer bought the item on Amazon. It also analyzes reviews to verify trustworthiness.
Top reviews

Kay Hudson
5.0 out of 5 stars Werewolves and Witches, oh my!
Reviewed in the United States on October 29, 2019
Verified Purchase
For Witch or For Poorer is the fifth installment in AE Jones’ Paranormal Wedding Planner series, featuring the last member of the team, Giz (short for Gizmo, as he’s a witch who prefers using technology to magic) and Maeve, the East Coast werewolf who joined the West Coast pack in the previous book (For Better or For Wolf). Tensions between the werewolf packs have eased, but there’s a new threat, from an ancient and secretive coven called the Lunadorium. Giz may not like using magic, and he does have his reasons, but Maeve needs a witch to help her learn to control her emerging powers, and the pack needs his help, too.

All the characters from the previous books are back, including Giz’ eccentric cat, Monster, who has his own part to play in the proceedings. Throw in a baby shower, a visit to a street of magic brokers, and a sweet love story, along with Jones’ trademark humor and lovable characters, and you have a thoroughly enjoyable read.
Read more
Helpful
Report abuse

Michelle
5.0 out of 5 stars Great read!
Reviewed in the United States on October 14, 2019
Verified Purchase
This is Maeve and Giz’s story but lucky us we get to spend time with wolves we met in the previous books. And of course the rest of the team makes appearances as well. It is wonderful to see Maeve grow into a confident and self assured woman. To overcome the past and the abuse of her so called father. Giz the witch who doesn’t practice magic due to fear of the past repeating itself is called upon to use those skills when the pack faces the unknown threat of the Lunadorium. The two face many obstacles: over protective brothers, emerging magic, threats to the pack and their own insecurities. But I think the author says it best Love is magic.
Truly enjoyable installment in the series. Was fun to learn more about Giz when he’s sorta been the background tech guy. Loved the book and glad to know we’re getting one more book in the series!
I received an ARC from the author. I voluntarily review this book. This is my honest review.
Read more
Helpful
Report abuse

KJ
5.0 out of 5 stars A E Jones writes another great fun read!
Reviewed in the United States on October 24, 2019
Verified Purchase
I received a free copy of this book and after I started reading it my free copy vanished from my Kindle. I was so intrigued by the few chapters I read that as soon as the book came out I bought a copy so I could finish it. I thoroughly enjoyed this fifth book in the Paranormal Wedding Planner series. Reading more about the wolf pack and learning more about Maeve was just great fun. A E Jones is great at taking supernatural beings in putting them into today's world. I was happy to read that she is writing one more book in this series
Read more
Helpful
Report abuse

TerryB
5.0 out of 5 stars I want more!
Reviewed in the United States on October 21, 2019
Verified Purchase
Although I received an advanced copy to read and review, I just loved Giz's & Maeve's story so much that I purchased a copy to share with my BFF!
Read more
Helpful
Report abuse

Becky Lower
5.0 out of 5 stars Who Says Geeks Can't Be Sexy?
Reviewed in the United States on October 14, 2019
AE Jones’ latest is surprising on a number of fronts. Of course, it’s well written and witty, since those are Jones’ trademarks. But this one goes beyond that, into mirroring today’s turbulent political landscape, but in terms of a west coast wolf pack, while making people pull for the HEA of Maeve and Giz, er, Tim.

Giz might be a wizard with his computer systems, but the magic he’s been endowed with he hides from use, for reasons he doesn’t share with anyone. And Maeve has her hands full learning how to navigate now being a baby sister to three older, very protective brothers. When she discovers she might also be endowed with magic, she is overwhelmed. Fortunately Giz is there to help her along and show her how to harness her substantial magical capabilities while both quietly realize that not all the sparks that fly between them are the result of witchcraft.

This book can be read as a stand alone, but why would you want to? The entire cast of characters are fun to get to know one at a time. Can’t wait for the next one
Read more
Helpful
Report abuse

Kindle Customer
4.0 out of 5 stars Another lighthearted, fun story
Reviewed in the United States on October 14, 2019
With this, the fifth book in the series, we finally get to know Giz, who has been in the background the whole series. While it is not necessary to read the previous books in this series to understand this story, there are many spoilers in this one for the previous books. All the other characters show up, and it is fun to visit with them again, and see them after their HEA. The book is well edited, which always adds to my enjoyment of a story. It turns out this is not the last book in the series, as the author reveals plans for a few background characters at the end of this one. I was lucky enough to be given an ARC of this ahead of time, and look forward to once again returning to this world in the next book.
Read more
Helpful
Report abuse

J. Johnson
5.0 out of 5 stars Wonderful, Fun Paranormal
Reviewed in the United States on October 21, 2019
I can't say enough about this wonderful series. Book 5 continues to entertain us with brilliant characters, wonderful writing, and superb editing. Maeve and Giz finally get their HEA which adds even more enjoyment to this fab book. Never a spoiler in my reviews, this is certainly a must-read and the ending leaves room for more to come. These books do not NEED to be read in order, but will likely be more enjoyable if you do. So, get this book NOW! You won't be sorry. I am providing my honest review after reading a complimentary copy and thoroughly enjoying it!
Read more
Helpful
Report abuse
See all reviews