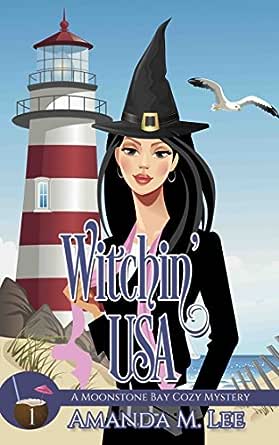 You've subscribed to A Moonstone Bay Cozy Mystery! We will preorder your items within 24 hours of when they become available. When new books are released, we'll charge your default payment method for the lowest price available during the pre-order period.
Update your device or payment method, cancel individual pre-orders or your subscription at
Your Memberships & Subscriptions
There was an error. We were unable to process your subscription due to an error. Please refresh and try again. 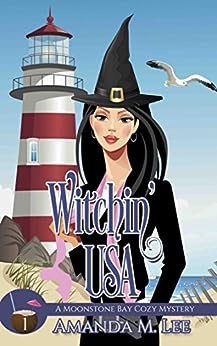 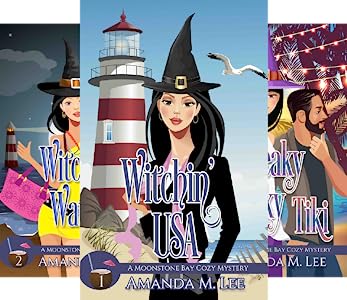 4.6 out of 5 stars
4.6 out of 5
570 global ratings
How are ratings calculated?
To calculate the overall star rating and percentage breakdown by star, we don’t use a simple average. Instead, our system considers things like how recent a review is and if the reviewer bought the item on Amazon. It also analyzes reviews to verify trustworthiness.

T. Kinsley
2.0 out of 5 stars Sorry... I found it to be sexist
Reviewed in the United States on February 6, 2018
Verified Purchase
There were two things I didn't like about this story. First, I found it to be sexist. I'm not a touchy-feely offended-by-everything kind of guy... But this book was straight-up sexist. The two male leads treat the female lead like a bratty child for the entire story. She pouts and whines and complains, while the men boss her around, brag about their sexual prowess, and generally treat her like a child. Somehow all of this is supposed to be "sexy" to her. I don't get it. The audio book voice actor even gave her a really shrill, whiny, voice (because that's how she's written). The only two times in the story where she actually takes action and defends herself are when her witch powers take over and do it for her (and she can barely remember doing it). She is a passive observer through the whole book, being swept along by circumstances and the men around her (who dictate her every move). I found her to be very different (in a bad way) compared to other female leads from the other Amanda M. Lee story I read.. The second thing I don't like about the story is that the identity of the killer was extremely obvious from the very beginning. There was not much "mystery" to this mystery.

I also don't believe this book was actually in the genre listed. This book is called a "cozy mystery", but if you look up the Wikipedia definition of a "cozy mystery", you'll find that "Witchin'" follows almost none of the tropes of the category. The lead character doesn't really try to unravel the mystery around her (the men do that). There is violence, heavy drinking, wall-to-wall sexual innuendo, and in the end a "hero" character murders the main villain in front of the female lead (and the police cover it up). Now I'm not generally opposed to any of those story elements as a rule, but they definitely don't fit the "cozy mystery" category.

As for Amanda M. Lee, the only other title I have read from her was "Any Witch Way You Can", which in my opinion is far superior to "Witchin' USA".

Mystery loves history
5.0 out of 5 stars Excellent Start For A New Series
Reviewed in the United States on January 31, 2018
Verified Purchase
Well! This was a step further into the paranormal for Lee. Of course the freaky circus has a wide range of paranormal critters but they don’t do a good job of hiding plain sight the way the paranormal characters in this series do. Not that her Grimm series doesn’t hit the paranormal, but It and the Winchester Witch Series pretty much stick to a very narrow range of paranormal critters. Not so with this one. It has a nice tight mystery, even if I did tag the bad guy early on. I’m going to enjoy this one a lot.
Read more
7 people found this helpful
Helpful
Comment Report abuse

lil angel Paula Joann
5.0 out of 5 stars Amanda M. Lee does it again!
Reviewed in the United States on January 17, 2018
Verified Purchase
Having just finished this amazing new book in Ms. Lee’s newest series, I find myself finished and do not yet have #2! I deeply enjoyed meeting Moonstone Bay’s newest witch. This story takes us to a tropical island full of shifters, ghosts, witches, zombies, and immediately it becomes impossible not to read constantly, pausing only to eat. Language use is superlative. Several mysteries require solving. You will love the characters and loudly cheer at assorted times. Now download this sweet book asap! Do not procrastinate, do it now!
Read more
6 people found this helpful
Helpful
Comment Report abuse

AJS
5.0 out of 5 stars Love this new series
Reviewed in the United States on March 14, 2018
Verified Purchase
I've read all of the Witches of the Midwest books, and love their crazy characters and dry wit. I also love the mystical element. This series is in the same vein, but different enough that you don't feel like you're read about the Winchesters' cousin. Hadley is a great heroine, thrust into a world she never knew existed and forced to unravel the mystery of her own heritage.

This book has a strong plot, funny and intriguing characters and a good mystery (although I did figure out the bad guy pretty early on). If you like Ms. Lee's other books, this won't disappoint. I'm looking forward to learning more about Moonstone Bay!
Read more
3 people found this helpful
Helpful
Comment Report abuse

Kris
4.0 out of 5 stars Looking forward to more, just not the word "cute"
Reviewed in the United States on January 5, 2018
Verified Purchase
I liked it & looking forward to seeing the story and the characters expand, especially the zombies :-) Probably my only criticism - or request may be a better way to say it, is please don't do the "you're so cute" stuff in this series. It was in this one twice and didn't really fit. It just bugs me, but maybe its just me. Amanda Lee is probably in my top 5 of favorite authors but I couldn't get through the Maddie Graves series (Lily Harper Hart pen name) because of all the "You're so cute I could eat you up" stuff. It was just too much. Other than that I adore the snark and the stories and all of the creative characters.
Read more
4 people found this helpful
Helpful
Comment Report abuse

Kindle Customer
5.0 out of 5 stars Surprisingly funny
Reviewed in the United States on April 6, 2019
Verified Purchase
I bought this book unsure if I would like it i read the blurb about it and it intrigued me even though it sounded like a mystery novel which I am not usually into. I am so glad I bought the book anyway I feel as if I stumbled upon a treasure . The book made me laugh out loud multiple times and though it was a mystery it wasn't so suspenseful that I was constantly on edge which is what I hate about mystery novels . I loved the snarky main character and how she was really just going through the motions as anyone in her situation really would be. I will definitely be buying all of this set of books and look at anything else the writer has .
Read more
One person found this helpful
Helpful
Comment Report abuse

Ladyice
5.0 out of 5 stars Witchin' USA (A Moonstone Bay Cozy Mystery Book 1)
Reviewed in the United States on February 19, 2018
Verified Purchase
Hadley Hunter inherits a lighthouse on the island of Moonstone Bay and the one city has the same name. The island is located off the southern coast of Florida in the Atlantic Ocean. The first morning Hadley finds a body washed up on her property and calls 911. Galen Blackwood, Moonstone' s head of law enforcement responds and discovers the female seems to have died as the other two ladies did. But first he has to check. Hadley thinks the people on the island act weird. From this point on the story takes lots of twists and turns. This book is addictive and great to read. Hadley and all the characters on the island are paranormal except for some of the tourists. I am waiting for book 2.
Read more
One person found this helpful
Helpful
Comment Report abuse

Kindle Customer
5.0 out of 5 stars I love Amanda M. Lee!
Reviewed in the United States on January 11, 2018
Verified Purchase
The best start to one of her series yet. I just couldn't stop reading. Easily one of her best story lines. This has potential to be her best work yet.

I'm looking forward to many many more books in this series. The only problem is they aren't out yet so I can binge read them. Guess I have to read some of her other books over again. (not for the first time)
Read more
4 people found this helpful
Helpful
Comment Report abuse
See all reviews

Kindle Customer
5.0 out of 5 stars Aaaand another must follow series!
Reviewed in the United Kingdom on January 11, 2018
Verified Purchase
I absolutely love Amanda's series ,yes all of them, I started to list them in order of preference and found it impossible. Now a new series, more witches with the added bonus of shifters and zombies,more great snarky ,funny characters nobody does this better. I don't want to be a moaning Minnie , but please Amanda write more , write faster !!!
Read more
One person found this helpful
Report abuse

Kindle Customer
5.0 out of 5 stars Love it
Reviewed in the United Kingdom on January 6, 2019
Verified Purchase
Already signed up for book two. This is a fascinating story, with characters that you want to know more about . Well written and informative. Places and new friends are described cleverly you can imagine what they look like. Well done. Highly recommend.
Read more
Report abuse

Saoirse
5.0 out of 5 stars Great start to new series
Reviewed in the United Kingdom on December 6, 2018
Verified Purchase
Loved this introduction to a new series by this author. I love her work and can see lots of possibilities for crossovers with her other series. New witch, interesting location, good mixture of characters. What’s not to love.
Read more
Report abuse

Dowiem
5.0 out of 5 stars Witchin' USA
Reviewed in the United Kingdom on November 17, 2018
Verified Purchase
Very funny with a nicely weird sense of humour. The story is very compelling and keeps you guessing. It was a pleasure to read. Would advise e regime to give it a go.
Read more
Report abuse
See all reviews