The Withered King (Tempest Blades Book 1) and millions of other books are available for Amazon Kindle. Learn more 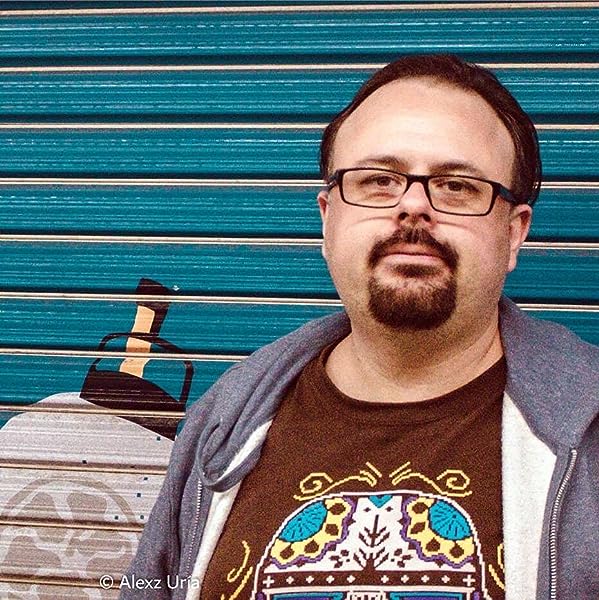 by Ricardo Victoria (Author)
4.5 out of 5 stars 6 ratings
Book 1 of 1: Tempest Blades
See all formats and editions
Sorry, there was a problem loading this page. Try again.
Read more Read less
Previous page
Next page

"An action-packed blend of magic and mayhem, sword and sorcery, science fiction and fantasy. The book is full of entertaining characters, has a sense of humor and adventure, and there’s a crackling video-game vibe added for good measure." — Maria Haskins, author and B&N Blogger

Fionn is the wielder of a legendary Tempest Blade, and he is blessed – or cursed – by the Gift. Though his days as a warrior are long over, his past leaves him full of guilt and regret. Life, however, has other plans for him, when he agrees to help a friend locate a missing person.

Gaby and Alex never expected to become heroes… until they met Fionn. As an ancient evil arises and consumes the land, Fionn must help them to master their own Gifts and Tempest Blades.

Together the three of them, and their friends, will chart a course aboard the flying ship Figaro to save the planet. Will Fionn’s past be an anchor, or will he overcome the one failure from his former life before time runs out?

In a world where magic and science intermingle, anything is possible.

Born in the frozen landscape of Toluca, Mexico, Ricardo dreamed of being a writer. But needing a job that could pay the rent while writing, he studied Industrial Design and later obtained a PhD in Sustainable Design, while living in the United Kingdom. There, he did a few things besides burning the midnight oil to get his degree:
-Trained in archery near Nottingham
-Worked in a comic book store to pay for his board game & toy addiction

He is back now in Toluca, living with his wife and his two dogs where he works as an academic at the local university. He has short stories featured in anthologies by Inklings Press and Rivenstone Press and he was nominated to a Sidewise Award in 2017 for the short story “Twilight of the Mesozoic Moon”, co-written with his arch-nemesis, Brent A. Harris.

Read more
Start reading The Withered King (Tempest Blades Book 1) on your Kindle in under a minute.

Kindle Customer
5.0 out of 5 stars Science and fantasy collide with epic results
Reviewed in the United States on October 5, 2019
Verified Purchase
This is not something you've read before.
Tempest Blades - The Withered King is the first novel from Ricardo Victoria, and like just about everything he writes, this is bursting with ideas.
To try to contain Ricardo's ideas is like trying to contain jelly with elastic bands. He's exuberant, he's bubbly - and he's bristling with imagination.
I had the chance to read an advance review copy of this book, so let me tell you what Tempest Blades is. It's a fantasy epic. No, wait, it's an anime-style adventure. Hang on, no, it's a science fiction escapade on another world. But hold up, here are roots of Ricardo's Mexican heritage. And Celtic myth. And a cartoon team-up of mighty heroes. It is a steampunk extravaganza with a soaring airship. It is science, and magic, and the science that underpins magic. It is tragic, it is witty. It is each of these things. It is all of these things.
This is not something you've read before.
It all begins with an ancient battle, before a flash-forward in time to a mystery of a missing professor. One by one, the team of heroes assemble as the mystery reveals a greater danger. An ancient danger. A danger that the seemingly immortal Fionn had thought long gone.
Ricardo really handles the build-up of this team well - it reads like episodes of a series, each of which adds an extra layer to what has gone before. Before you know it, you have come to know a whole team of heroes, and care for each of them. Just in time for their world to start falling apart.
So hop aboard. It's a science fantasy epic that bursts with originality. It is new, it is fresh, and it makes the imagination soar.
In short, this is not something you've read before.
Read more
Helpful
Report abuse

John Walkenford
5.0 out of 5 stars A chaotic roller coaster ride
Reviewed in the United States on October 25, 2020
Verified Purchase
First it was figuring out what kind of story it is. Standard fantasy... no wait urban fantasy... wait... what... science fiction also? But once you (quickly) get through that and meet all of the characters it becomes a really fun fast moving adventure and I look forward to the other books already being worked on to see what happens next.
Read more
Helpful
Report abuse

Richard D Wood
4.0 out of 5 stars Good work
Reviewed in the United States on November 15, 2020
Verified Purchase
Found it very captivating and it moved along well. The characters are enjoyable and memorable. Enjoyed the whole read. I like a good ending
Read more
Helpful
Report abuse

Paul C
4.0 out of 5 stars An impressive debut that any reader of speculative fiction should enjoy.
Reviewed in the United States on August 21, 2019
There’s a some portals and a spaceship, a lizard pilot dude and a good deal of magick, a 133 yr old father-mentor guy and lottsa swords. A total mashup spanning the spacepunk, fantasy, scifi, and LitRPG genres, The Withered King looks to surprise you on every page.

Fionn had lost his friends in the Great War… and a hundred years later, he is still grieving. Brought in to help with the investigation into a professor’s death, he has a new mission. One that will give him a role as mentor and maybe savior of the whole world.

I suspect that Victoria has always had an active imagination. Thinking up tales and stories and spinning them for hours on end. This book has all the facets of a good tale: a world that is both strange, yet familiar in many ways, characters you can root for, and supernatural elements that keep you on your toes.

The key to this book for me are the plot points that expand so well from the great battle in the opening pages… each chapter takes you one step closer to solving the greater mysteries Victoria has spun in his debut novel. My only criticism is that at times the mashup may be a little too much as explanation or info dumps did get in the way of the plot progression.

Overall, The Withered King is an impressive debut that any reader of speculative fiction should enjoy.
Read more
One person found this helpful
Helpful
Report abuse

Elara
5.0 out of 5 stars Final Fantasy Meets Science Fantasy
Reviewed in the United States on August 26, 2019
Fionn is a hero from another age and he has a lot of baggage around using his power and his magical blade even in the best cause. In the past, he has seen them bring him only sorrow, guilt and regret. But when a new adventure opens up he realises he can't ignore what he is, who he is and he finds a new generation of ‘Gifted’ who need his help to master their skills.

What I really enjoyed:
The Pace. This is a book which seems to pack a page and a half of happenings on just about every page. It powers along and once you get into the story it is page-turning.
The Setting. This has the feel of a world the author knows well. A world that is never over-described, but has the sense of solidity that only great worldbuilding can provide.
The Plot. Complex, twisty and coming at you from all angles. The one thing it's not is predictable or dull.

What I struggled with:
Two things, but both are purely personal gripes - taste not substance and between them, I'd maybe dock a half star.
The Banter. I am not big on this kind of stuff in the most ideal of situations but when our heroes take time out in the middle of a battle to stop and score verbal points off each other, I struggle to maintain any measure of disbelief.
The Lack of Realism. Even allowing for the fact this was a fantasy, I struggled in places to believe in the events as described. It was so much like anime it was, at times, as if all the rules of reality went out the window.

Overall Thoughts.
If you love anime style fantasy then this book is a must. The experience of reading it is unique in capturing that feel.
Read more
Helpful
Report abuse

Maria Haskins
4.0 out of 5 stars A terrific story with a sense of adventure and fun
Reviewed in the United States on August 21, 2019
The Withered King by Ricardo Victoria is an action-packed blend of magic and mayhem, sword and sorcery, science fiction and fantasy. The book is full of entertaining characters, has a sense of humor and adventure, and there's a crackling video-game vibe added for good measure. It's a book that should appeal to readers looking for adventure and fun.
Read more
One person found this helpful
Helpful
Report abuse
See all reviews
Back to top
Get to Know Us
Make Money with Us
Amazon Payment Products
Let Us Help You
EnglishChoose a language for shopping. United StatesChoose a country/region for shopping.
© 1996-2021, Amazon.com, Inc. or its affiliates