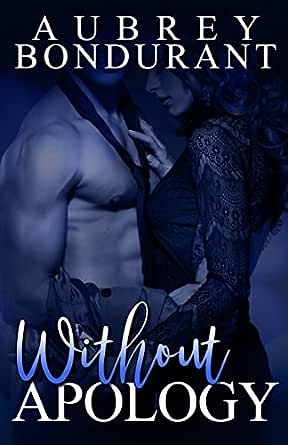 You've subscribed to Without Series! We will preorder your items within 24 hours of when they become available. When new books are released, we'll charge your default payment method for the lowest price available during the pre-order period.
Update your device or payment method, cancel individual pre-orders or your subscription at
Your Memberships & Subscriptions
There was an error. We were unable to process your subscription due to an error. Please refresh and try again. 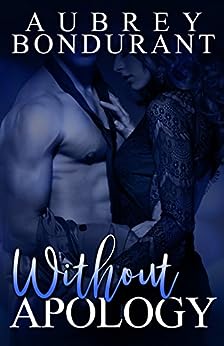 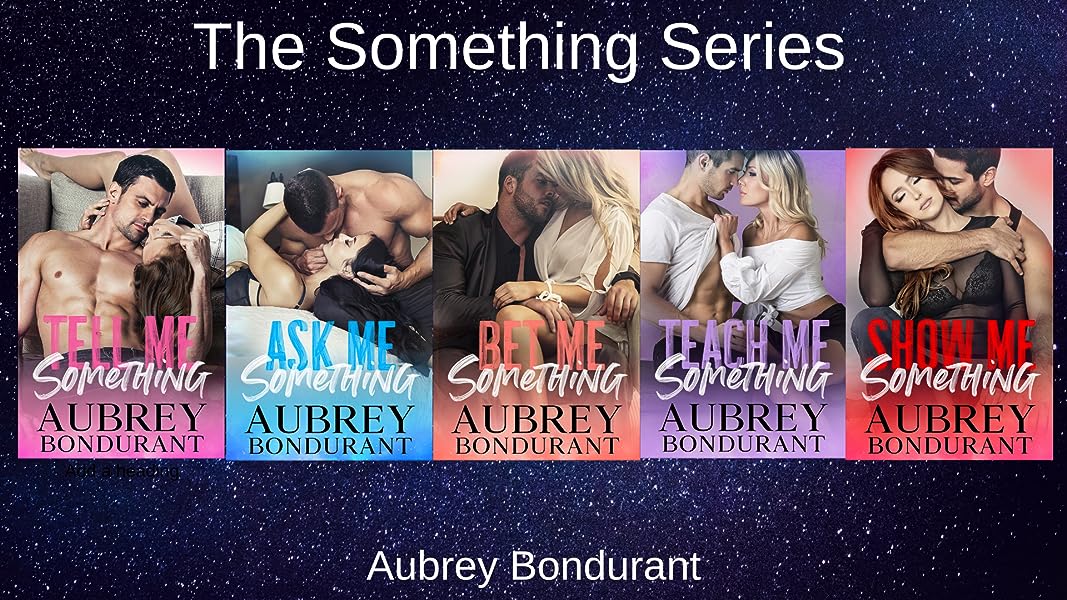 Without Apology (Without Series) Kindle Edition 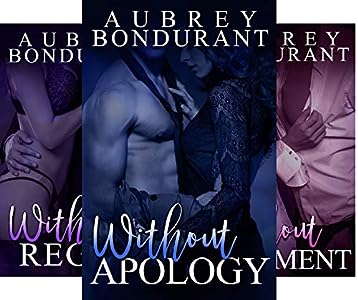 "Ms. Bondurant did an excellent job with sucking me in and holding my interest until the very last page. I can always count on this author to give me a quality story that's fun, sexy, and highly enjoyable." - Lori - BF Bookies

"Without Apology is exactly what I want my romance reads to be all about.If you have never read Aubrey Bondurant, I think that Without Apology is the perfect place to start. I loved Simon and Peyton and I can't wait for more int his series." - Stacey is Sassy

"It's always a plus to see strong, intelligent women portrayed in romance."- Book Bosomed Blog

"Without Apology is a perfect blend of heat, humor and heart. Both Simon and Peyton are great characters that you can't help but fall in love with." Samantha-Goodreads

4.6 out of 5 stars
4.6 out of 5
131 global ratings
How are ratings calculated?
To calculate the overall star rating and percentage breakdown by star, we don’t use a simple average. Instead, our system considers things like how recent a review is and if the reviewer bought the item on Amazon. It also analyzes reviews to verify trustworthiness.
Top reviews

Stacey is Sassy
5.0 out of 5 stars Forgetting to find happiness…
Reviewed in the United States on April 29, 2018
Verified Purchase
I kind of think that Aubrey Bondurant wrote this story for me. First of all, Simon looks like DAVID GANDY!! Thanks for that image, Aubrey, it made it very easy to picture Simon, fall in love with Simon, want to be with Simon. But, alas, I’m not in the market for a Simon, so it’s up to me to approve and Aubrey to create, someone worthy of Simon. Well, Peyton isn’t me, but she’ll do.

Without Apology was bloody good. I felt comfortable in this story from start to finish. The characters were refreshingly normal, well, kind of normal in a workaholic kind of way. Both Simon and Peyton are hard working, high achievers who gain a lot of satisfaction from the work they do.

Brexy (British, Sexy) Simon is HOT on the outside, smoking in the bedroom but when it comes to work, he’s the Iceman. Work and his personal life are very separate, and until Peyton, he never planned to change his ways. Peyton, while an extremely hard worker, is dedicated to her sister, brother-in-law, nieces and her dog. She tries to give them all the time they deserve but sometimes there’s just not enough hours in the day. I don’t think Peyton had any plans to change things until Simon came along. Sure, Peyton planned to get married and have her own family one day, work wouldn’t be everything. I guess she was just lucky Simon wanted champagne that day or she may have still been plodding along waiting for one day to happen.

What I loved about Without Apology was that Simon and Peyton proved me right. Love is way more important than work. Sure, work should give you satisfaction but if heading to the gym is your idea of the perfect “down time”, then something is definitely missing in your life. IN MY OPINION!! I know there are some crazy people out there who LOVE being fit and healthy but I would hope that they had more than work and exercise in their life. Well, Simon proved that work wasn’t everything after he met Peyton. Then, Peyton proved that pigeonholing someone because of their career focus doesn’t mean they’re not worth taking a risk on.

Without Apology was funny, sweet and very sexy. Their first meeting and after their first date neither had any idea that their lives were about to be changed. I loved seeing the relationship bloom between Simon and Peyton. Work and their relationship had to be kept completely on different planes. Both thought they would be in for a short time but a good time. No emotions, just good company and great chemistry. Unfortunately, Simon and Peyton never planned on good company becoming *the bestest in the whole world* company, and great chemistry turning into *you’re out of my sight and I miss you* chemistry.

Without Apology is exactly what I want my romance reads to be all about. A storyline that captured my attention, characters that grew and accepted change, sexy times that made me blush and squirm, and a relationship that wasn’t just in the bedroom/boardroom/bar. Love is never easy…well, company and chemistry can be easy, but compromising, communicating and sacrificing only really happens when the love is real and worth fighting for. I appreciated that Aubrey Bondurant showed that love is easier when you choose the person that becomes more important than work.

If you have never read Aubrey Bondurant, I think that Without Apology is the perfect place to start. I loved Simon and Peyton and I can’t wait for more in this series. I'm excited to see if Emma, Simon’s beautiful “like a sister”, assistant, finds her perfect tattooed, pierced biker.
Read more
9 people found this helpful
Helpful
Report abuse

The story Without Apology (Without Series Book 1) by Aubrey Bondurant is a wonderful romance book that I loved reading. It hooked me in from the beginning and I didn’t want to put it down until I had read the final page. It is a story that frequently brought a smile to my face and also that warm feeling that you get when two people discover that they are falling for each other. The main characters unexpectedly meet and from that meeting find that they have an attraction to each other. Events then happen that threaten to put an end to any chance they have to move forward in a relationship. The only problem is that the pull between these two is unlike anything either has ever experienced and has them wanting what is forbidden. Will they throw caution to the wind and act on their feelings for each other? Will this couple find an HEA? This story has amazing characters that I loved reading about. Simon is a man that does his job and doesn’t show many emotions. He has a reputation of being cold and distant. That is changing on his current assignment. He is showing that he does have a different side that is warm and caring. He finds himself pulled towards a woman with just one kiss. He knows that she is off-limits however he is not able to make his heart understand. He can’t stay away. The past plays a large part in how this couple perceives things that happen and how they react to situations that arise. Will the past hinder this couple from being able to find true happiness? My emotions were going up and down the entire time I read this book. It is a story that is wonderful to read and has characters that I could relate to. It is the first book in a series and I can’t wait to read the next one.
Read more
7 people found this helpful
Helpful
Report abuse

Lila
5.0 out of 5 stars A funny, realistic romance read.
Reviewed in the United States on January 28, 2019
Verified Purchase
Free read, New to me author, 274 pgs, 5 stars
I absolutely loved Simon and Peyton's story. Aubrey really brought these characters to life. The characters and their lives were so surprisingly normal, which was refreshing! You actually felt like you could meet them anywhere. I love that Simon had two sides; the Iceman in the boardroom and was fire in the bedroom. Peyton wasn't a weak, save me please, Virgin who couldn't get out of her own way. Instead, she's strong and knows how to handle herself, has a great work ethic, and thankfully has some sass. The reality of what shouldn't happen is met by the inevitable and why not? Aubrey writes these situations in a way that pulls you in as if you were a fly on the wall or watching your best friend go through this, all the while rooting for her.
The supporting characters were just as interesting. I loved Jen for her mouth and Emma because... Well, our eye-candy tastes are similar lol.
This was the first book I've read from this author. I grabbed it while it was free and since it intrigued me, I read it right away. I'm going to purchase the other two books in his series very soon. If Aubrey's writing style that she had in this book (the draw you in by being real and interesting) then I may finally have a new author to follow.
I would highly recommend this book.
Read more
2 people found this helpful
Helpful
Report abuse
See all reviews

Pinklisar
5.0 out of 5 stars Brilliant
Reviewed in the United Kingdom on April 26, 2020
Verified Purchase
Aubrey Bondurant is a new author to me and I have completely fallen in love with her after reading this book. I have read so many books lately that have failed to grab my attention and this is just what I needed to get me back on track. I am about to indulge in the rest of the series and quite possibly hart back catalogue. A really great author, I loved Simon and Peyton, the storyline was great and the supporting characters (Emma and Peytons sister) were fab. A really well written book.
Read more
Report abuse

AngieB
5.0 out of 5 stars Office romance at it's best!
Reviewed in the United Kingdom on February 20, 2020
Verified Purchase
This is my first book by this author and I really enjoyed it, but I may be a bit biased as office romances are my guilty pleasure. I loved the way the author kind of drip fed the back story of the main characters Simon and Peyton. I really took to Peyton, she came across as funny, kind and totally down to earth. Looking forward to starting the next book in the series Without Regret.
Read more
Report abuse

Sarah Loopy Green
4.0 out of 5 stars Page turner
Reviewed in the United Kingdom on February 28, 2020
Verified Purchase
I enjoyed the whole dynamic of this story. Their connection was instant and had me eagerly reading their journey. I look forward to reading more from Aubrey.
Read more
Report abuse

alexandra watson
5.0 out of 5 stars Enjoyable
Reviewed in the United Kingdom on February 12, 2019
Verified Purchase
I really got stuck into this story so well, I had to wonder where my day went. It was a nice flowing story minus any cliche office romance drama.

Suzie C
5.0 out of 5 stars Fab read
Reviewed in the United Kingdom on July 7, 2018
Verified Purchase
I absolutely loved the start of this new series by Aubrey Bondurant. It was captivating from the start and I literally couldn’t put it down. Well written with some great characters. Can’t wait to read book 2
Read more
Report abuse
See all reviews