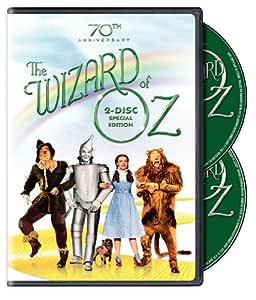 The original 1939 classic film, brilliantly restored and remastered! In this charming film based on the popular L.Frank Baum novel, Dorothy and her dog Toto are caught in a tornado's path and somehow end up in the land of Oz. Here she encounters some memorable friends and foes in her journey to meet the Wizard of Oz who everyone says can help her return home and possibly grant her new friends their goals of a brain, heart and courage. The Ultimate Collector's Editions are filled with bonus features, including over 16 hours of wonderful wizardry about this movie classic, the life and times of original author L. Frank Baum and other early screen adaptations of the Oz books - with such new-to-DVD delights as a documentary profile of director Victor Fleming, the TV-movie The Dreamer of Oz: Starring John Ritter, Annette O'Toole and Rue McClanahan and the 2007 Hollywood Walk of Fame Salute to the Munchkins.

When it was released during Hollywood's golden year of 1939, The Wizard of Oz didn't start out as the perennial classic it has since become. The film did respectable business, but it wasn't until its debut on television that this family favorite saw its popularity soar. And while Oz's TV broadcasts are now controlled by media mogul Ted Turner (who owns the rights), the advent of home video has made this lively musical a mainstay in the staple diet of great American films. Young Dorothy Gale (Judy Garland), her dog, Toto, and her three companions on the yellow brick road to Oz--the Tin Man (Jack Haley), the Cowardly Lion (Bert Lahr), and the Scarecrow (Ray Bolger)--have become pop-culture icons and central figures in the legacy of fantasy for children. As the Wicked Witch who covets Dorothy's enchanted ruby slippers, Margaret Hamilton has had the singular honor of scaring the wits out of children for more than six decades. The film's still as fresh, frightening, and funny as it was when first released. It may take some liberal detours from the original story by L. Frank Baum, but it's loyal to the Baum legacy while charting its own course as a spectacular film. Shot in glorious Technicolor, befitting its dynamic production design (Munchkinland alone is a psychedelic explosion of color and decor), The Wizard of Oz may not appeal to every taste as the years go by, but it's required viewing for kids of all ages. --Jeff Shannon

On the discs
The 2009 Wizard of Oz Two-Disc Special Edition DVD has the sharp 2005 restoration using Warner's Ultra Resolution process and an accompanying featurette on how it's done. The technicians also discuss how the sound was remixed, though that would have been more effective had it included surround-sound demonstrations (the featurette is in 2.0). Other features include a commentary track by critic John Fricke supplemented by vintage cast interviews (he offers a lot of trivia, and debunks the myth that Shirley Temple was ever close to getting the Dorothy role); profiles of nine cast members and clips of other movies they appeared in (including Toto); a lightly animated 10-minute storybook narrated by Angela Lansbury; and the original mono track and a music-and-effects track. New for 2009 is a sing-along track that you can turn on as you watch the movie or you can select from 10 numbers to sing along with karaoke-style subtitles. The second disc has the Lansbury-hosted documentary The Making of a Movie Classic; outtakes and deleted scenes, including Judy Garland's "Over the Rainbow" reprise and the home-movie recording of "The Jitterbug"; sketches and stills and composer Harold Arlen's home movies; audio underscores and radio programs; 1979 interviews with Margaret Hamilton, Ray Bolger, and Jack Haley; 2001 and 2005 behind-the-scenes featurettes; a 1950 Lux Radio Theater broadcast; and other items too numerous to mention. --David Horiuchi

Page 1 of 1 Start overPage 1 of 1
This shopping feature will continue to load items when the Enter key is pressed. In order to navigate out of this carousel please use your heading shortcut key to navigate to the next or previous heading.
Back
Next
Pages with related products. See and discover other items: dog movies for kids, Explore wolf decorations for homes