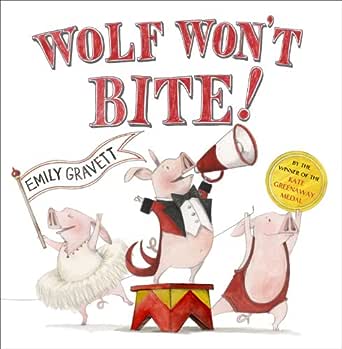 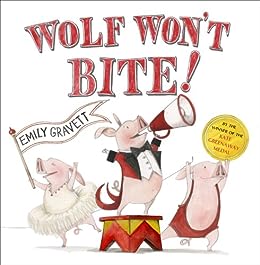 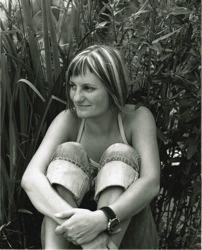 In this twist on the classic pig-wolf relationship dynamic, three little circus pigs holler to “Roll up! Roll up! Roll up!” and see the mighty, wild wolf they’ve captured. They grandstand as they heap indignities upon the long-suffering creature—from dressing him in a big red bow and riding him bareback to throwing knives at him and sawing him in half. Each event ends with the boast, “Wolf won’t bite!” Of course, they take it all a step too far when they show off their ability to put their heads right inside his hairy, gaping maw (not to worry: no swine were hurt in the making of this picture book). With text set in a fancy circus-poster typeface, bombastic artwork floating against a spare white background, and a highly shoutable refrain, this playful picture book is tailor-made for group read-alouds. Giggles all but guaranteed. Preschool-Kindergarten. --Ian Chipman --This text refers to an alternate kindle_edition edition.

"Readers who see themselves as pushed and prodded by similarly obnoxious adults will let out a sigh of relief when the wolf rebels."--"Publishers Weekly"

"Gravett's impeccable pacing, sly visual clues, and clever use of white space elevate this universal story of gloating gone wrong...is reminiscent of that of Falconer's "Olivia", and it is quite possible that these three pigs would enjoy her friendship very much."--"The Horn Book"

"The text is appealingly rhythmic, and the repetition of the "wolf won't bite" will encourage children to join in the reading...The compositions are as bold as the saucy pigs themselves, and the pictures will translate as well to a crowd as they will to a single child. Wolf may not bite, but the kids will eat this up."--"Bulletin of the Center for Children's Books"

""Wolf Won't Bite!" is an entertaining and original spin on the old wolf-and-pigs theme. It will delight children."--"School Library Journal" --This text refers to an alternate kindle_edition edition.