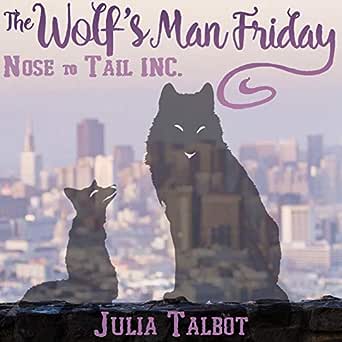 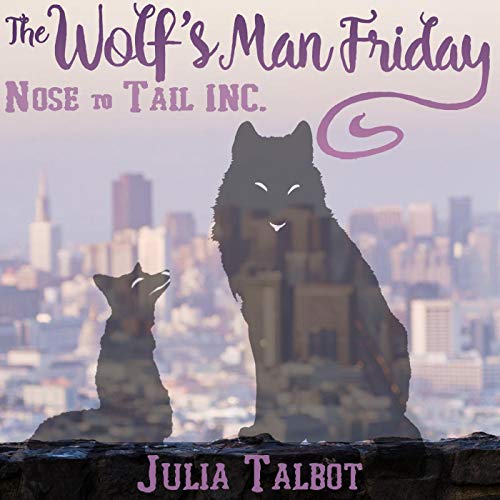 Kindle Customer
5.0 out of 5 stars 5 stars = I freaking LOVED this book!!!
Reviewed in the United States on June 5, 2018
I received a free copy of this book to read and review for Wicked Reads.

Having loved Wolfmanny, I didn’t hesitate when the opportunity came up to review The Wolf’s Man Friday. As much as I loved the Marcon household and would have loved to have seen more of their lives, the second book in the series focuses on a new Nose to Tail Inc. employee and his assignment – to guard the alpha’s nephew, without his full knowledge, and keep him from putting himself in danger while the alpha recovers from a near-fatal attack. So the man in charge, Richard, sends in a fox shifter, Jaxon, to serve as Sebastian’s personal assistant… who just so happens to carry a gun. And much like readers saw in book one, the sparks certainly fly as the wolf and the fox discover there’s more to each other than meets the eye.

At first glance, The Wolf’s Man Friday looks like it might be a mystery as Jaxon is brought in to protect Sebastian from being attacked by an unknown party, but the farther into the book I read, the more I realized that the reader isn’t expected to suss out whodunit. Sebastian, Jaxon, and the reader are all kept in the dark as to who might be responsible and why because Sebastian’s uncle and alpha, Ron, refuses to admit to remembering the details of his attack. Now I don’t actively try to figure out who the bad guy is in books very often, but by the time I felt that enough clues and information had been presented, Sebastian and Jaxon were on the same page as I was – this doesn’t mean other readers won’t figure it out sooner or have strong suspicions about it, but rather that there wasn’t an obvious culprit from the beginning. For me, this actually ramped up the action and danger of the story, albeit somewhat unnecessarily at times when Sebastian let his guard down at inopportune moments. Seriously, you’ve been attacked multiple times already and you’re going on your merry way as if you haven’t a care in the world? Yet such is the foolish mindset of someone who feels safe on their home turf. Fortunately for Sebastian, Jaxon was on the job – both as bodyguard and mate. Ah, yes, the men found an unexpected treasure in one another, their mate.

While it seemed as though much of the focus of the book was on the threat to Sebastian and the subsequent action, Talbot again does a nice job of weaving the romance between the men into the story, striking a nice balance between the two. What appears to begin as simple lust quickly becomes more as Sebastian and Jaxon come to realize and acknowledge that there’s more to the spark between them than just sexual attraction. And that spark is HAWT! There’s a sensuality to the lithe fox that ramps his wolf up and it makes for some very steamy encounters. For me, that makes Jaxon’s ‘nesting’ in Sebastian’s home even more endearing, and Sebastian’s eager acceptance of it left me grinning. As with book one, The Wolf’s Man Friday has a wonderful cast of side characters who add to the richness of the story – even the characters you wanted to throttle for their hardheadedness. I can only hope that we may eventually catch glimpses of them in a future installment in the series. Oh, and in case you’re wondering, you can read The Wolf’s Man Friday as a standalone if you skipped Wolfmanny because kids aren’t your thing – but I will say that you’re doing yourself a disservice because it was an excellent read as well.

Please note: My review is of an unedited, pre-release copy of this book and assumes that any errors were corrected prior to publication.
Read more
2 people found this helpful
Helpful
Report abuse

I’ll start by saying I don’t normally review later books in a series after the first one, but this book stands by itself just fine. As a matter of fact, I think it’s even better than the first book so if you’re going to start somewhere this is a good place to do it!

There is something about Talbot’s writing, and this series in particular, that really agrees with me. She creates smart, capable characters trying to make sense out of chaotic lives. The settings are (eventually) cozy, homey, and comfortable. It doesn’t hurt that the scenes in the sack are smokin’ hot, too!

As with the first book there’s little to no world-building here, except to establish that it’s a world like our own only shifters are all kinds are commonplace. Jaxon is a clever fox: intelligent, skilled not just in being a personal assistant but in various forms of defense. On top of all of this he has a bouncy eagerness that is utterly endearing. Sebastian is a guy who is forced into a role he doesn’t want but sees no way out of it. He becomes focused on finding his uncle’s attackers to the point of ignoring all of his day-to-day business responsibilities, but really? He’s an artistic sort who would be happier doing fabric design than managing textile suppliers.

The overarching mystery of who is attacking Ron and Sebastian is interesting and drives the plot, but the real joy here is the interactions of the characters. Jax and Seb are perfectly suited for each other and the heat generated between them is impressive! I loved the side characters as well: Alan, Seb’s packmate and impetuous sidekick; Tyrone, an elk shifter who is Seb’s driver but also his friend and defender; even characters with small roles are memorable, fun and at times snarky, which is always fun.

Talbot ties everything up neatly at the end and Jax and Seb get their happily ever after, but it’s quite a ride to get there. Um, in more ways than one. I described Wolfmanny as “not deep, but it’s the literary equivalent to curling up by the fireplace with hot chocolate and a warm cinnamon roll.” This is more of the same with a little more action thrown in. I liked this one a lot!
Read more
2 people found this helpful
Helpful
Report abuse
See all reviews

Kindle Fairy
3.0 out of 5 stars Should have been awesome
Reviewed in the United Kingdom on January 31, 2019
Verified Purchase
This has all the right elements for me but unfortunately it didn't hold my attention as well as other books I have read by the same author. This is a surprise to me, because this book does have everything: multiple shifters; big secrets; mates, bodyguards, actions and adventure, all things I like.

Whilst there were some parts I really enjoyed, I wonder if the romance between the two MC's was a bit flat. They seemed more like a good working team that enjoyed "extracurricular activities" rather than a huge romance, and I skimmed some of those scenes after a while.

It isn't a cliffhanger ending, our couple get their hea, but there are some teasing threads for a potential follow up. This was the same in the last book (book1), but when I read this story ( book2) it included no new storyline that matches book 1 except that the MC's are employed by the same agency and know some of the same characters.

Curious, it isn't bad, but it should have been awesome.
Read more
Report abuse
See all reviews
Back to top
Get to Know Us
Make Money with Us
Amazon Payment Products
Let Us Help You
EnglishChoose a language for shopping. United StatesChoose a country/region for shopping.
© 1996-2021, Amazon.com, Inc. or its affiliates