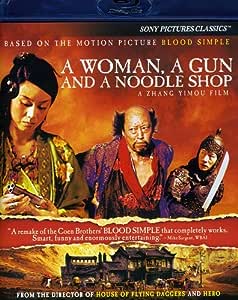 A Woman, a Gun and a Noodle Shop [Blu-ray]

It looks like a perfect plan: the affair will come to a cruel but satisfying end when a Chinese noodle shop owner plots to execute his unfaithful wife and her lover. But the lover has a lethal plan of his own in this violent tale of adultery and revenge based on the Coen Brother’s debut classic Blood Simple.

4.1 out of 5 stars
4.1 out of 5
54 customer ratings
How does Amazon calculate star ratings?
Amazon calculates a product’s star ratings based on a machine learned model instead of a raw data average. The model takes into account factors including the age of a rating, whether the ratings are from verified purchasers, and factors that establish reviewer trustworthiness.
Top Reviews

JNagarya
5.0 out of 5 stars Having read too many reviews, I'm still not certain --
Reviewed in the United States on March 31, 2013
Verified Purchase
whether "Blood Simple" is a comedy; an over-the-top/pushing the envelope suspense-drama-murder-mystery; or both (I don't see anything funny in it).

That isn't a problem with "A Woman, a Gun, and a Noodle Shop": it is unequivocally an intelligent comedy covering all the ground, from intelligent and witty to slapstick.

The main characters are "jumbled": the wife is conniving and confident; her "boyfriend" is a neurotic mess of insecurities. The husband is ugly and monstrous. Sun Honglei is typically excellent. And two supporting characters are more skittish than bumbling "Nancy Drew"-like amateur "detectives" simply trying to figure out what's going on, he taking the lead except when there's potential danger, at which times he graciously allows her to go first.

It even includes some of Zhang Yimou's signature slow-motion techniques.

Delightful (watch the supporting character in pigtails and blue) from beginning to end, and preferable to "Blood Simple" for those who found the tension of the latter induced not so much by on-screen events but by the tediously slow pacing.

Others give (too many) details about the story. The blu-ray is excellent in print, transfer, sound, and abundant extras. (The funniest off-screen is the girl who is, in the film, the supporting character in pigtails and blue.)

This will be watched more often than "Blood Simple"!

And watch for the police siren.

The Bear
5.0 out of 5 stars A resplentent Qing dynastly version of 'Blood Simple'.
Reviewed in the United States on May 25, 2015
Verified Purchase
If you can believe it, this is 'Blood Simple' in the Gobi desert province of Gansu during the Qing dynasty. It follows the 'Blood Simple' story line very closely, although there are a couple of characters thrown in, partially to fill holes and partially for comic relief.

The art direction and cinematography are up to Zhang Yimou's standard, i.e. a visual feast. He seems to have a real feeling for the Chinese desert regions, which are also used to beautiful effect in 'Hero'.

Kya
4.0 out of 5 stars A lot of fun
Reviewed in the United States on February 9, 2012
Verified Purchase
Another film that was showing in selected theaters only - not where I live!!!!! Couldn't wait to get this one after seeing a brief trailer. This movie was a lot of fun. I enjoyed the whole shabang. Easy to watch, great goofy characters, comedy, fantastic landscape, wonderful cartoon costumes, sillyness, and wonders abound. Fast paced beginning - a total improbable romp that is eye poping. Very hollywood, but with a Chinese sensibility.
Recommended for the "noodle dish" acrobatics as well. Made me want to chow down on those darned noodles!
Wonderful cinemaphotography - whats new - Zhang Yimou is an absolute master of cinemaphotography.
Go for it!
Read more
8 people found this helpful
Helpful
Comment Report abuse

Richard Ranta
5.0 out of 5 stars the only 6 star film I'll reconmend.
Reviewed in the United States on June 4, 2012
Verified Purchase
The number of films I've seen more than 9 times within 3 months is limited to one: " A women, A gun and a Noodle shop". This is a remake of the film, "Blood Simple". That fact will not get in the way of the greatness of this film. I've never seen silence used in such a craftful matter. there are times when the quiet takes on the lead story telling point. You owe it to yourself to give this film a watch. I believe this is a true "sleeper".
Read more
6 people found this helpful
Helpful
Comment Report abuse

R. Yang
5.0 out of 5 stars hilarious typical asian
Reviewed in the United States on January 12, 2015
Verified Purchase
(disclaimer - reviewing this based on this rendition alone and not because it was a remake of another movie) totally enjoyed it! watched it 3x in the first week when it arrived because it was so hilarious and it was an instant hit with my son - who insisted on watching it everyday for about a couple of weeks. it has the typical asian tragedies due to etiquette that must be observed in a marriage, typical language barrier misinterpretations, and typical asian stereotyping of the characters that made this our new MUST HAVE.
Read more
Helpful
Comment Report abuse

Ning
4.0 out of 5 stars Not a classic zhang yimou film, but still entertaining
Reviewed in the United States on July 4, 2019
Verified Purchase
Interesting costumes. Only watched it because of the director, but was a little underwhelmed.
Read more
Helpful
Comment Report abuse

A customer
4.0 out of 5 stars Three shots and your out (spoilerless review)
Reviewed in the United States on January 19, 2014
Verified Purchase
Director Zhang Yimou (House of Flying Daggers/HOFD) switched more than daggers for a gun in this Chinese black comedy. While HOFD was more of a martial arts love story, "A Woman, A Gun, and A Noodleshop"(W/G/N) seems much more similar to the Korean movie  The Good, the Bad, the Weird [Blu-ray ]in terms of a comedic interplay and overall vibe. Ultimately W/G/N is supposed to be a remake of the Coen Bros. film "Blood Simple".

It takes a good five minutes or so to get into the overall feel of the movie, figuring out what it is and roughly what to expect. Once that happens, it is a highly entertaining film that, while it misses a little here and there, is very entertaining and fun to watch. From a cinemaphotography standpoint the film is a visual feast, the characters are interesting, and while some of the plot twists and turns seem at first obvious they ultimately change on you. The movie does not have too much to do with food, with the noodleshop serving just a backdrop to the set, but it does include an amazing noodlemaking scene near the beginning of the film before too much blood has been shed.

The movie's plot centers around a mean spirited (but rich) noodleshop owner, his deservedly unhappy (but also manipulative) wife, some disgruntled employees, and some corrupt police. When the wife buys a gun for a seemingly obvious purpose, it leads everyone down a path they were not anticipating. All three shots from the triple barreled gun are eventually fired, just not in the way the viewer is originally expecting.

The most dissatisfying part of the movie was the end, which finishes a little abruptly and leaves you feeling like there could have been another 5 minutes to the film. Not so much to answer questions, but just to put a capstone on everything and leave it feeling not so clipped. It's possible that Yimou was just following the ending of the Coen Bros. film, but I can't say for sure since I never saw that movie.

Well worth watching, the film is subtitled in English (no dubs) and other languages, and the special features are mostly a "making of" that is extensive but not especially entertaining. Although it is rated R, I think most people would feel this should be PG-13, or at the very least OK for 15 and up (the murders are not overly graphic/no sex). Unless you don't like subtitled movies or black comedies this is an easy and fun pickup.
Read more
3 people found this helpful
Helpful
Comment Report abuse

Calvin A. Fleming
5.0 out of 5 stars Great Chinese spaghetti western with a woman star!
Reviewed in the United States on January 18, 2020
Verified Purchase
If you haven’t see it-GET IT. it is hilarious!
Read more
Helpful
Comment Report abuse
See all reviews from the United States

FilmFan2010
3.0 out of 5 stars Another visual treat by director Zhang
Reviewed in Canada on January 13, 2014
Verified Purchase
This film was based on 'Blood Simple' directed by the Coen brothers decades back. This Chinese version by Zhang Yimou is not as good. However, Zhang is known for his eye on 'beauty' - he started his film career first as a camera man. As a result this Blu-ray disc delivered stunningly beautiful landscape of the northern part of China. However, a couple of things did annoy me - the overly colourful costumes, the crown-like looks of a couple of characters. I find this totally unnecessary and hence am giving it 3 stars instead of 4. Still, the film is a visual treat.
Read more
Helpful
Sending feedback...
Thank you for your feedback.
Sorry, we failed to record your vote. Please try again
Report abuse

p5browne
4.0 out of 5 stars Something different
Reviewed in Canada on June 15, 2013
Verified Purchase
Enjoyed the movie, and would recommend to others to watch. First because it's good, and different, and secondly, the PQ is excellent!
Read more
Helpful
Sending feedback...
Thank you for your feedback.
Sorry, we failed to record your vote. Please try again
Report abuse