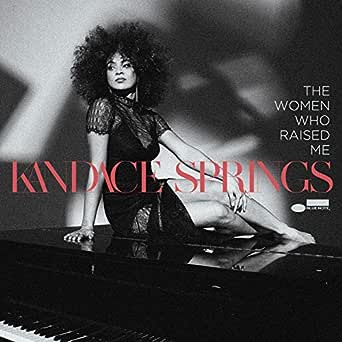 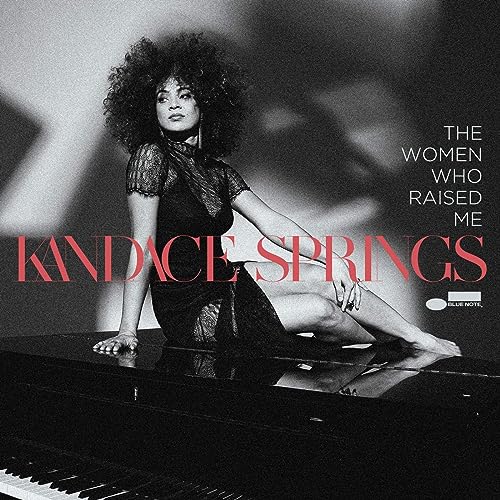 The Women Who Raised Me

4.6 out of 5 stars
4.6 out of 5
209 global ratings
How are ratings calculated?
To calculate the overall star rating and percentage breakdown by star, we don’t use a simple average. Instead, our system considers things like how recent a review is and if the reviewer bought the item on Amazon. It also analyzes reviews to verify trustworthiness.
Top reviews

John W. Dunner
5.0 out of 5 stars Every one is a signature cover!
Reviewed in the United States on June 18, 2020
Verified Purchase
For The Women Who Raised Me, Kandace Springs goes under the covers. Ostensibly a tribute to the female singers to whose songs Springs brings respectful, fresh interpretations, the album’s skimpy liner notes simply credit the musicians on each track. It would have been interesting to learn how Springs chose her material and how certain singers contributed to her own artistic growth. All we can do is search the song titles to make an educated guess as to which singer(s) were her major influencers. So we have Diana Krall, Dee Dee Bridgewater, Nina Simone, Sade, Lauryn Hill, Bonnie Raitt, Ella Fitzgerald, Roberta Flack, and Billie Holiday – but no Dianne Reeves, Oleta Adams, Randy Crawford, Peggy Lee …? Paltry postings aside, Springs’ stellar renditions should, to a one, rank as signature covers of these standards and classics. Springs lives the loneliness in Duke Ellington’s “Solitude,” and she adds another level of ache to Raitt’s “I Can’t Make You Love Me.” She stretches the chorus vocal of Roberta Flack’s “Killing Me Softly,” giving a bluesier feeling to the song’s lament. And in a brilliant meld of styles, Springs flings a long introductory piano quote of Beethoven’s “Moonlight Sonata” at Screamin’ Jay Hawkins’ “I Put a Spell on You,” raising the possibility of specters and shadows amidst the longing. Throughout The Women Who Raised Me, the intimacy is enveloping, clearly demonstrating lessons well-learned, and suggesting a whole bunch of righteously proud mothers.
Read more
5 people found this helpful
Helpful
Comment Report abuse

Michael G GuntherMaher
4.0 out of 5 stars A great album from a highly talented young lady
Reviewed in the United States on May 24, 2020
Verified Purchase
I have Springs' first two albums on vinyl, and have recently added this one. OK, I liked her from the start, and I got to see her in a medium-sized concert venue Fall 2019 where she commanded the audience and performed as well as I could have hoped. This album is at the same level of production and creativity as her first two, though it doesn't include any of her own songs. The album arrived in perfect condition, the sides are reasonably quiet, and the mastering job (stretched out over 4 sides) is very good for a vinyl album produced by a large music company. It deserves 4.5 stars for the vinyl, and 4.5 for the music. For comparison, I'd give 5 stars to the MoFi 45 RPM version of Miles' "Kind of Blue", and 5 stars for the music--so, actually, this is high praise for Springs' latest vinyl release!
Read more
6 people found this helpful
Helpful
Comment Report abuse

hifiman5
VINE VOICE
5.0 out of 5 stars This album and “Soul Eyes” are her best of her three releases.
Reviewed in the United States on August 19, 2020
Verified Purchase
Candace is a genuine talent! Her voice is smooth in texture and a natural for blues, jazz and ballads. Candace has played lots of festivals and smaller scale concerts. Those occasions provided her with the opportunity to hone her style. With “Soul Eyes”, Candace revealed her style both compositionally and performance-wise. “Indigo”, her sophomore effort led her astray into contrived, trendy territory. It just didn’t work. “The Women Who Raised Me” allows Candace to find her true musical roots. Her connection with these songs is compelling, making it a relaxing, satisfying record. I'm not going to compare her sound to other vocalists. When she is doing her thing as on her first and third releases, she can compare in phrasing and emotional connection with the best of them.

For the audiophiles, these three albums are well recorded, balancing her vocals with the excellent accompanying musicians. The sound is rich and intimate as good classic sounding jazz should be.

Jean L.
5.0 out of 5 stars Kandace Springs is AMAZING and love her on vinyl!
Reviewed in the United States on April 20, 2020
Verified Purchase
This is our first Kandace vinyl. We recently purchased a record player-turntable and decided to switch from purchasing a Kandace Springs CD to vinyl. We are very satisfied...mostly because it is Kandace! We are avid, enduring fans and have seen her perform four times. Having her latest, “The Women Who Raised Me” in “long play” really takes us to reliving her live concerts. Sooo glad we bought it and so grateful to have experienced Kandace’s radiant, incredible voice and keyboard talent in person, on CD, youtube and now on Vinyl.
Read more
One person found this helpful
Helpful
Comment Report abuse

lotus
4.0 out of 5 stars An Admirable Jazz Singer
Reviewed in the United States on October 3, 2020
Verified Purchase
I'm going to be honest about this songstress. Kandace is a singer I like a lot, but not by any means in the category of a Nnenna Freelon, a singer I love, because every song she sings, she makes her own. That is not something apparently that every singer can do, especially when it comes to crossing generational boundaries. In other words, Kandace can shine like no one else when in comes to modern, R and B classics, but, unlike with singers like Freelon, she sounds strained when singing songs like Angel Eyes as opposed to songs like Ex factor. Great at hip hop/jazz. Sort of struggles with the classics. An entertaining album, nonetheless.
Read more
Helpful
Comment Report abuse

James E. Joyce
5.0 out of 5 stars Number #1 on my chart
Reviewed in the United States on March 29, 2020
Verified Purchase
The best ever from this young lady. I enjoyed every song on the cd
Read more
3 people found this helpful
Helpful
Comment Report abuse

T J Toher
5.0 out of 5 stars Artistry of The Highest Order
Reviewed in the United Kingdom on April 1, 2020
Verified Purchase
All the covers on this album are a fitting tribute to the women who recorded them and inspired Kandace. No pastiche or karaoke here. Each song has her stamp on it. Superb musicianship, excellent guest artists and not a note out of place. A couple of the covers are, imho, better than the originals. Absolutely essential album.
Read more
4 people found this helpful
Report abuse

meridianboyz
5.0 out of 5 stars An audible Hug and comforting music
Reviewed in the United Kingdom on March 29, 2020
Verified Purchase
Goodness, if ever an album was ever made for the times you're living through, it was this one. Kandace Springs has lovingly reinterpreted some extremely beautiful and classic songs in her own unique way. These tunes are soothing and calming and a perfect soundtrack to the darker days in which we all suddenly find ourselves. I truly cannot recommend this lovely album highly enough. It is a veritable massage for the soul and senses in these strange days.
Read more
2 people found this helpful
Report abuse

ian capes
3.0 out of 5 stars Don’t believe reviewers (including this one ?)
Reviewed in the United Kingdom on June 9, 2020
Verified Purchase
Despite glowing reviews , I found the album to be a bit sameish , lacking tempo changes and everything sung in somewhat similar tones. One for her fans I think
Read more
3 people found this helpful
Report abuse

deena palmer
5.0 out of 5 stars Exquisite
Reviewed in the United Kingdom on March 27, 2020
Verified Purchase
This lady just gets better and better. I thought you couldn't get a better album than her last Indigo, but I was so wrong. This album is perfection. Such a marvellous voice.
Read more
One person found this helpful
Report abuse

rockinjohnny12
1.0 out of 5 stars CD arrived in it's case BUT is cracked !!
Reviewed in the United Kingdom on April 9, 2020
Verified Purchase
Please replace this CD as it's cracked and therefore won't play !!
Read more
2 people found this helpful
Report abuse
See all reviews