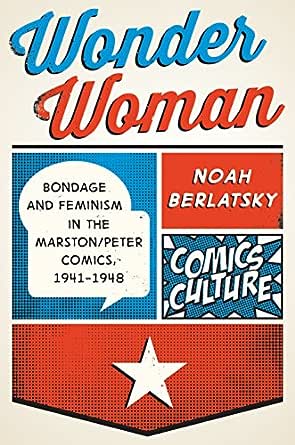 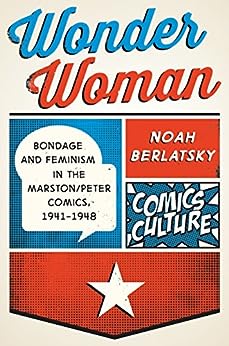 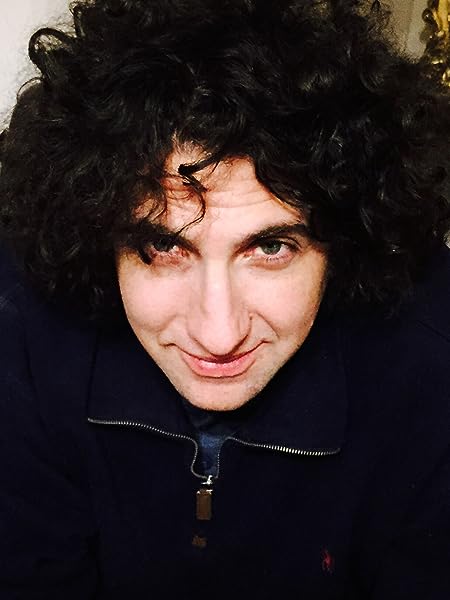 "Berlatsky can always be counted on to show us new facets of what he examines, in fact, to show that the facets are part of a whole shape heretofore unperceived."--Carla Speed McNeil "writer/artist of Finder "

"Zounds! Who knew the wonders of Wonder Woman's sadomasochistic complexities? If you only know the TV show, get ready for the ropes and lassoes and chains of the 40's comics as examined by Noah Berlatsky. Be sure to buy the e-book to see the original images in glorious color!"--Linda Williams "UC Berkeley "

"In this smart and engaging book, Noah Berlatsky reveals how psychology, polyamory, bondage, feminism, and queer identities inspired comic books' most enduring superheroine. A fascinating read for anyone interested in comics, pop culture, or gender politics!"--Julia Serano "Whipping Girl: A Transsexual Woman on Sexism and the Scapegoating of Femininity "

"Insightful...Berlatsky examines some of the most complex and controversial aspects of Wonder Woman. The analysis is solid, the research is thorough, and the conclusions are valid."--Publishers Weekly

"An engaging read from start to finish, and Berlatsky's love of Golden Age Wonder Woman comics comes through on every page."--Comics Journal

"The research is astonishing. The dedication is breathtaking. And the fact that this would actually be usable as a college textbook in either a women's literature, comic history, or even pop culture class is awesome."--Comic Booked.com

"Berlatsky, the editor of Hooded Utilitarian (a comics and culture site), has written a work filled with deep scholarly insights on the history and politics of Wonder Woman's creator, as well as a larger examination of the histories, lifestyles and personal ethos that gave rise to one of popular culture's most powerful figures."--Mic.com

"Noah Berlatsky took a deep dive into the marriage of psychology and artwork that is [William] Marston's enduring pop culture impact."--New City Lit.com --This text refers to an out of print or unavailable edition of this title.

NOAH BERLATSKY is the editor of the comics and culture blog The Hooded Utilitarian. He has written on gender, comics, and culture for many publications, including Slate, Public Books, The Chicago Reader, Reason, The Comics Journal, The Baffler, and The Atlantic.
--This text refers to an out of print or unavailable edition of this title.

3.1 out of 5 stars
3.1 out of 5
17 global ratings
How are ratings calculated?
To calculate the overall star rating and percentage breakdown by star, we don’t use a simple average. Instead, our system considers things like how recent a review is and if the reviewer bought the item on Amazon. It also analyzes reviews to verify trustworthiness.
Top reviews

RDDTop Contributor: Batman
TOP 500 REVIEWER
3.0 out of 5 stars Thought-Provoking, but Some Conclusions Unsupported
Reviewed in the United States on June 11, 2017
Verified Purchase
In "Wonder Woman: Bondage and Feminism in the Marston/Peter Comics, 1941-1948", Noah Berlatsky argues, “'Wonder Woman', the original comic, was much more interesting, beautiful, and worthwhile than Wonder Woman the popular icon” (pg. 187). He draws upon queer theory, performance theory, and gender theory in his analysis with comparisons to other examples of media targeted to women, such as "Twilight" and gothic literature. Bertlasky focuses specifically on the comics written by Wonder Woman creator William Moulton Marston and illustrator Harry G. Peter. While many modern interpretations of the original comics attempt to downplay or explain away the themes of bondage and lesbianism, Berlatsky argues, “To ignore the bondage in Marston and Peter then, is to miss the comic’s appeal not only to men but to women – and is also to ignore an important part of the feminist message” (pg. 23). The stories offer a parallel to women’s own sense of metaphorical bondage in a patriarchal society while offering a message of hope through Wonder Woman’s escapes. Discussing themes of lesbianism in Marston’s work, Berlatsky argues, “I do not see how it is possible to see the lesbian romance and lesbian play in 'Wonder Woman' as anything but intentional” (pg. 153). Further, Berlatsky continues, “Marston…included lesbianism in both his academic work and in his fiction. He saw lesbianism as normal, healthy, and even ideal” (pg. 149). He draws comparisons to Marston’s living arrangement with Elizabeth Holloway and Olive Byrne, arguing based on the appearance of these themes in Marston’s work that Holloway and Byrne were lovers. Jill Lepore, in her book "The Secret History of Wonder Woman", examined the same living situation without coming to that conclusion based on the extant evidence. Bertlasky, while conceding “to some degree those questions are unanswerable,” insists that his assumption is correct (pg. 151). While it would be interesting if it were, he argues without evidence beyond his literary interpretation. I fundamentally disagree with Berlatsky’s conclusion that the iterations of Wonder Woman following Marston and Peter’s run is superfluous. While some of the storylines and interpretations were undoubtedly weak or flawed, each successive generation of readers and writers reworked the character to meet the demands of their time, much like the Greek myths on which Marston and Peter drew for the character. His goal that his book will encourage others to read Marston and Peter’s comics to discover a “work created in the spirit of feminism, of peace, of queerness, and of love” is noble, some of his conclusions could use more evidence (pg. 215).
Read more
2 people found this helpful
Helpful
Comment Report abuse

Blind IO
5.0 out of 5 stars A concise, fascinating study of one of the most influential and creative comics icons of all time.
Reviewed in the United States on May 13, 2019
Verified Purchase
An incredibly thought-provoking masterpiece of comics analysis. If you have any interest in comics, feminism, or the history of pop culture in America then this is a must-read. Berlatsky takes what at first look appears to be an innocent children’s comic from a seemingly more innocent time and, through context and insightful analysis, demonstrates quite convincingly the subversive and deeper intent to it all.

The magic of his writing is that, although you never look at Wonder Woman the same way again, it doesn’t detract from the whimsically childish enjoyment of the comics themselves. Rereading the original comics are still incredibly enjoyable, but now on multiple levels. Knowing Marston’s underlying motivations and inspirations doesn’t remove any of the absurd joy at Amazons riding space-hopping kangaroos. If anything, the reading becomes more fun thinking about all the different levels that the stories cover.

Noah Berlatsky has proven himself to be one of the top feminist writers in the country, and this book is absolutely necessary to truly understand Wonder Woman’s place in American pop culture.
Read more
2 people found this helpful
Helpful
Comment Report abuse

Charissa
3.0 out of 5 stars Thought provoking material
Reviewed in the United States on June 17, 2017
Verified Purchase
This book is definitely interesting and a good read. The author provides arguments on all sides of each of the topics discussed and they are typically thought-provoking, interesting points that are made. That being said, it seems that the author often draws lines that aren't really there, particularly when discussing imagery from the original comics. There were several times that I found myself staring at an image for several minutes trying to see what the author was describing. Overall, it's a good book and a nut read for avid Wonder Woman fans.
Read more
One person found this helpful
Helpful
Comment Report abuse

David Fisher
5.0 out of 5 stars Queer, feminist utopia in Wonder Woman.
Reviewed in the United States on February 5, 2015
Verified Purchase
A wonderful thought provoking book about the queer, feminist, bondage that is the center of a utopian view espoused by William Marston in the early Wonder Woman comics. Backed up with close reading of the comics and discussion of Marston's other writings and connected to modern theoretical underpinnings in a careful and thoughtful way. Should make any fan of comics or feminism or queer theory/activism eager to look back at these old comics. And makes these old super hero comics seem far more thoughtful, off beat and literary than most recent "art" comics.
Read more
2 people found this helpful
Helpful
Comment Report abuse

Adrian Bonenberger
5.0 out of 5 stars For Comics Fans, Literary Readers, and Intellectuals alike
Reviewed in the United States on December 12, 2014
Berlatsky's examination of William Marsden's early Wonder Woman comics, framed by a contemporary understanding of gender studies, is a passionate, well-written exploration of an under-examined time and place. In tackling the subject, Berlatsky upends many conventional assumptions about how people viewed power and sexuality at a time more associated with hetero-normative standards and big band music.

I was reminded at times of Ed Wood's story, and how (in certain ways) open the society of 1940s America was, with the war and then later returning veterans and a sense of moral possibility, culturally and narratively - reflected in the occasional studies of and movies about that time period. Oftentimes the impulse is to conflate WWII and post-WWII with the early 1950s, which was, in many ways, a reaction to that time - there was a sense that America had gone off the rails, and that the communists, who now had nuclear capabilities, were going to overcome us because of what was perceived at the time as moral weakness.

Works like this are important to understanding current stories, and the myths we hold about our grandparents and ourselves. "Wonder Woman: Bondage and Feminism in the Marsten/Peters Comics" is a great place to begin the conversation, or to continue it - especially if you, as a reader, prize intellectually measured analysis, rather than sentimental myth.
Read more
10 people found this helpful
Helpful
Comment Report abuse
See all reviews