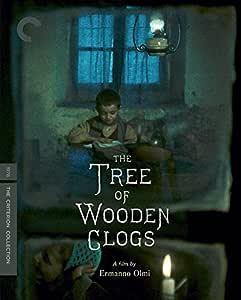 The Tree of Wooden Clogs (The Criterion Collection) [Blu-ray]

A painterly and sensual immersion in late nineteenth-century Italian farm life, The Tree of Wooden Clogs by Ermanno Olmi (Il posto) lovingly focuses on four families working for one landowner on an isolated estate in the province of Bergamo. Filming on an abandoned farm for four months, Olmi adapted neorealist techniques to tell his story, enlisting local people to live as their own ancestors had, speaking in their native dialect on locations with which they were intimately familiar. Through the cycle of seasons, of backbreaking labor, love and marriage, birth and death, faith and superstition, Olmi naturalistically evokes an existence very close to nature, one that celebrates its beauty, humor, and simplicity but also acknowledges the feudal cruelty that governs it. Winner of the Palme d Or at Cannes in 1978, The Tree of Wooden Clogs is intimate in scale but epic in scope a towering, heart-stirring work of humanist filmmaking.

DIRECTOR-APPROVED BLU-RAY SPECIAL EDITION FEATURES
- New 4K restoration, created in collaboration with The Film Foundation at L Immagine Ritrovata and supervised by director Ermanno Olmi, with uncompressed monaural soundtrack
- Alternate Italian-language soundtrack
- New introduction by filmmaker Mike Leigh
- Ermanno Olmi: The Roots of the Tree, an hour-long episode of The South Bank Show from 1981, featuring an interview with Olmi on the film and a visit to the farm where it was shot
- New program featuring cast and crew discussing the film at the Cinema Ritrovato film festival in Bologna, Italy, in 2016
- Archival interviews with Olmi
- Trailer
- New English subtitle translation
- PLUS: An essay by film critic Deborah Young

Jim Tarleton
5.0 out of 5 stars Epic masterpiece
Reviewed in the United States on February 21, 2017
Verified Purchase
4 peasant families work a farm for a landlord in the late 19th century in Northern Italy is an epic masterpiece. Non-professional actors portray the 4 families exquisitely. I've seen this movie over 6 times and it gets greater with every viewing. Beautifully photographed and directed, it is a must see and a must have in any collection. This Criterion collection Blu-Ray edition is flawless and superb. One of the greatest Italian movies of all time.
Read more
7 people found this helpful
Helpful
Comment Report abuse

Russell E. Scott
5.0 out of 5 stars Five Stars
Reviewed in the United States on April 17, 2017
Verified Purchase
this is the one film
Read more
One person found this helpful
Helpful
Comment Report abuse

SJ_Andy
5.0 out of 5 stars Gentle, powerful and poignant
Reviewed in the United States on April 9, 2019
Almost did not seem like you were watching actors in movie. This is a vivid earthy look at the turn of the twentieth century life on an estate in Lombardy North Eastern Italy.
Read more
Helpful
Comment Report abuse

Chris Miller
5.0 out of 5 stars Under-rated film, but you need to give it time
Reviewed in the United States on September 7, 2016
It's been 12 years since I saw this film, but I remember it fondly and was happily surprised to see that criterion decided to take it on. It's a hidden gem. My review from 12 year ago:
this film's style reminds me of a cross between the godfather (because of the colors) and kiarostami's work (because of the pace, texture and sound design). the opening shot is of a field of tall grasses and we know right away that this is going to be an organic film about earthy matters. the film's visual style, particularly its earthy color scheme, reinforce this fact. at just shy of three hours the film is remarkably slim on plot. in an averagely paced simpsons episode there would likely be an equal amount of plot in the first seven minute act, as there is in this entire film. that's both a testament to the quick storytelling of the simpsons, and the slow, plotless, drive of this film. but, as you know if you've read my reviews of the few iranian films i've seen, i'm not averse to a lack of plot. what drives the film is the characters and their interactions with the land and their neighbors. the film's trailer says the film follows three families, the netflix synopsis says four families are the subject of the film, and allmovie.com says five families are followed. hmmm. i didn't really keep track, and it sort of depends upon whether you count the newlyweds at the end of the film as a separate family. but i digress.
the film's texture is amazing. kiarostami, and iranian cinema in general, have a similar texture and i think a lot of it is owed to the way they mix the sound. it's as if the microphone is on the ground at all times. first, i should note that most of the sound work was looped in during post-production instead of being done while filming. every step in the film can be heard, and is usually high in the mix. to me this technique grants an extra layer of texture to the film. it makes the film all the more tactile and real when you can hear the dirt and rocks crunch under a person's footsteps. since the film is about three/four/five families of farmers, this sound design makes perfect sense. if it were a victorian period piece, the same sound design would be misplaced.
somehow the film was able to completely draw me into the farmers' way of thinking. about two hours through the film there is a single shot of a cluster of bees on a wall, rather than associating this image with danger (a typical response within a typical film), i immediately associated it with a honey treat. in this way the film was able to get me thinking of nature as useful and friendly, instead of an enemy which must be conquered. it was a subtle response, but a telling one.
besides the importance of nature, major themes addressed include the intertwined nature of life/death, the importance of community, and religion. it's a good film, and even though not much actually happens in the usual sense, it addresses, directly and indirectly, all sorts of universal concerns. unlike "princess and the warrior," this is a film that on paper probably looks rather unimpressive, but in its filmed state is actually quite a stunning (in its simplicity) piece of work. B++.

nonnlybul
5.0 out of 5 stars Real Life
Reviewed in Canada on June 25, 2017
Verified Purchase
Watched it last night with a group and we all loved it. So realistic of life in Italy around early 20th century.
Read more
Report abuse

Giovanni Paolo Facchinetti
5.0 out of 5 stars It’s more important to know the Family
Reviewed in Canada on September 30, 2019
Verified Purchase
I born in this place and everything is real what do you see in the movie.
Giovanni