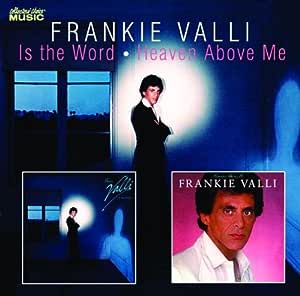 Is the Word / Heaven Above Me

Frankie's move to Warner Brothers coincided with his smash hit title song to the musical Grease, which headlines '…Is the Word', while the hit 'Where We Did Go Wrong' leads off 1980's 'Heaven Above Me'. Bob Gaudio is back behind the board for both, too.

14. Passion For Paris (an American In Paris)

4.4 out of 5 stars
4.4 out of 5
7 customer ratings
How does Amazon calculate star ratings?
Amazon calculates a product’s star ratings based on a machine learned model instead of a raw data average. The model takes into account factors including the age of a rating, whether the ratings are from verified purchasers, and factors that establish reviewer trustworthiness.

Joseph M. Bertola
3.0 out of 5 stars Nice CD, but expensive.
Reviewed in the United States on May 20, 2017
Verified Purchase
This was a lot of money to pay for a Frankie Valli CD, most of which are very reasonable. In fact I bought this one used, and it was still pricey at $42! But, I have the vinyl LP "Frankie Valli Is the Word" and I like it very much. I wanted to listen to it in my car, so I had to obtain a CD. I have never bought a used CD before but it sounded quite good, just like the LP. I had never heard of the the other album on the CD, but it did contain a cool song called "Passion for Paris." This is a very nice CD, but I only gave it 3 stars because the price was outrageous. (Notice I bought it anyway)
Read more
One person found this helpful
Helpful
Comment Report abuse

mb
5.0 out of 5 stars Beautiful songs I had never heard before
Reviewed in the United States on April 1, 2013
Verified Purchase
I have always enjoyed the music of Frankie Valli & The 4 Seasons and also, Mr. Valli's solo work that I have heard, so I decided to check out this album on iTunes. I liked both the soft rock and disco-styled songs that featured his natural voice (other than falsetto). I don't recall hearing these songs ever before, except for "Grease," which is really very unfortunate. They're great. Thank goodness for iTunes. I decided to buy the CD and "rip it" to my iPhone instead of just getting it off iTunes. There is a nice little booklet that comes with it that discusses Mr. Valli's carreer, influence by the Bee Gees and writing credits for two of the songs. This CD is definitely worth owning.
Read more
One person found this helpful
Helpful
Comment Report abuse

Mr. RICHARD ROCCHIO
4.0 out of 5 stars MORE GREAT MUSIC FROM FRANKIE VALLI!
Reviewed in the United States on January 10, 2012
Frankie Valli is an American musical legend! Perhaps the GREATEST lead singer of our time. But his solo career
can certainly stand on it's own merits. "Can't Take My Eyes Off Of You", "My Eyes Adored You", "Grease" are
just some of the solo hits that everyone is familiar with. But there has been so much more from Mr Valli that
is NOT well known. Everytime this man went into the recording studio you can tell he gave it his all and enjoyed making GOOD music. Hard to find these days! This particular collection has some very good selections.
I enjoy a GOOD ballard and my fvorites in here are, "If It Really Wasn't Love", "Sometimes Love Songs Make Me Cry", "You Better Go", "Without Your Love" and "Needing You". As someone who has just about everything Frankie and the Seasons have ever recorded I believe you will enjoy this collection. There will NEVER be a voice like Frankie Valli's again!

Mr. K. G. Charmer
3.0 out of 5 stars Solo didn't work!
Reviewed in the United States on January 25, 2010
The critical review of this album is a pretty accurate view of the album and YES it falls way below the standard of 'Close-Up or 'Valli' and even 'Our Day Will Come'. Those albums are all amongst the voting for Valli's best solo albums.

The problem really was the false belief that he could forge a solid solo career without the Four Seasons. The rock industry set out to kill disco in 1977 and he abandoned the Four Seasons to go solo with material like this. Although competent it is as others have said...out of time...but Bob Crewe and Bob Gaudio are also responsible for failing to see this. Performances are however excellent and if the disco and ballad mixture of songs is to your taste this is well worth having...particularly for the driving 'Soul/Heaven Above Me' which was so good 'Live' on the 1980 tour.
These Warner/MCA album marks the end of Frankie Valli's real 'solo' career but he would never recover and find an original and organic sound as he did with the 1976/77 Four Seasons.

hyperbolium
3.0 out of 5 stars +1/2 - The Midas touch of Barry Gibb helps one out of two
Reviewed in the United States on June 30, 2008
After several hit singles and four commercially unsuccessful albums on Private Stock (paired on Collectors Choice reissues "Closeup / Valli" and "Our Day Will Come / Lady Put the Light Out"), Valli moved to MCA. More importantly, his earlier introduction to Barry Gibb (via a bit part in the film version of "Sgt. Pepper's Lonely Hearts Club Band") resulted in one of the biggest hits of his solo career, the title theme to "Grease." The #1 single keyed the sound of the resulting album, "Frankie Valli is the Word," returning to the disco-tinged vibe he'd explored on the 1976 "Our Day Will Come" LP. Unlike the earlier dance tunes, however, a sophisticated Bee Gees-styled vibe replaced the mindless disco clichés. In addition to the album's hit, Gibb provides the horn-and-drum laced "Save Me, Save Me," and several tunes (including Valli's original "Needing You") offer a slicker version of the urban pop-soul that was rendered so perfectly on Boz Scaggs' "Silk Degrees."

Despite the fetching addition of Hubert Laws on flute for "A Tear Can Tell" and "No Love at All," much of "Frankie Valli is the Word" is unmemorable. While Valli could still sing himself past the disco-era monotony, the songs here aren't strong enough to keep the listener's attention. The most successful tracks are the hook-filled "Grease," and slower, sparer ballads like "Without Your Love" and "You Better Go." Once the disco drums and strings get going, Valli hasn't the material to overcome. The same can be said for Valli's 1980 follow-up, "Heaven Above Me," which features several fine ballads, including the bottom-of-the-chart-scraping Chris Forde duet, "Where Did We Go Wrong." Once again, though, the production team couldn't shake themselves free of disco's affectations, even as the music's commercial fortunes waned. The 6:45 "Let It Be Whatever It Is" sounds like it was recorded four years earlier, with a driving dance beat, horns (including a sax solo from Tom Scott), female background singers and a throwaway lyric of Studio 54-like sexuality. Forde returns for a duet on the 10:29 medley of "Soul" and "Heaven Above Me," but the mechanical rhythm is better suited for the disco than the home stereo. The closing "Eat Your Heart Out" offers a hooky pop melody, albeit with a standard disco beat and lyric.

As with Valli's final LP for Private Stock, his pair of albums for MCA found him unable to locate a profitable way to spend his considerable vocal talent amid the sounds of the late `70s. Valli's disco hangover was rendered somewhat inert by the presence of the Bee Gees connection on "Word," but without the inspiration of a Barry Gibb hit single, the follow-up album returns to the uninspired ground he's visited a couple of years before. As on most of Valli's solo albums, the ballads, despite their canonical arrangements, provide the requisite scenery to chew, and the occasional upbeat hit allows him to fly past disco convention. Neither of these albums are Valli's best work of the `70s (that honor goes to "Closeup" and "Valli"), and other than "Grease" and a few fetching ballads, these are more for completists than fans. 3-1/2 stars, if allowed fractional ratings. [©2008 hyperbolium dot com]

david clarke
5.0 out of 5 stars TOPS
Reviewed in the United Kingdom on May 21, 2013
Verified Purchase
easy listening valli is the word some good stuff heaven an soul are probably the best work valli has ever produced, Headphones, few beers, Certainly blows you away.
Read more
Helpful
Sending feedback...
Thank you for your feedback.
Sorry, we failed to record your vote. Please try again
Report abuse