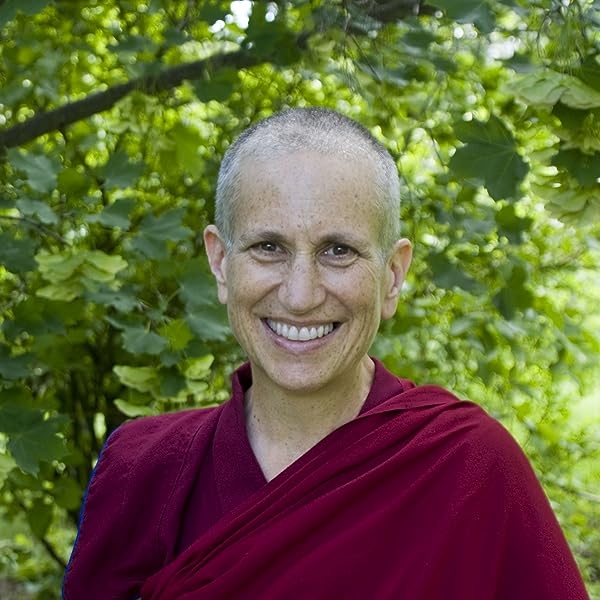 "Combining the teachings drawn from Shantideva and the lojong teachings of Tibetan Buddhism with present-day examples, Chodron presents a compelling and accessible guide for practitioners in the Western dharma community."—Sangha Journal

"Thubten Chodron offers her insights on anger, the ways that it manifests in our lives, and the ways that we can skillfully work to transform it. Both inspiring and humble in its approach, this book is sure to be a help to many."—Sharon Salzberg, meditation teacher and author of Lovingkindness: The Revolutionary Art of Happiness

"Presented with clarity, wit, anecdotes, and examples, the material is easy to read and to absorb. If you have an anger problem (who doesn't?) or are dealing with someone who does (who isn't?), you will be glad you found this book."—Light of Consciousness

"Thubten Chodron is one of our freshest voices of the dharma. Echoing the clarity of H.H. the Dalai Lama's own teachings on forgiveness and healing, in Working With Anger she brings us helpful, practical insights from her deep training in Himalayan wisdom traditions. Written in clear, user-friendly language, this superb handbook offers us concrete strategies for dealing effectively with the painful afflictions of anger, criticism, and betrayal in contemporary life situations. Can we ever tire of such necessary, good advice?"—Trevor Carolan, David See-Chai Lam Centre for International Communication

"By presenting in everyday language the Buddhist methods for overcoming and preventing anger, Bhikshuni Thubten Chodron has made accessible time-tested practical guidelines that can be helpful for everyone."—Alexander Berzin, author of Relating to a Spiritual Teacher and Developing Balanced Sensitivity

"In Working with Anger, Thubten Chodron offers us a kind and genuinely helpful guide to handling one of the greatest challenges in living an emotionally intelligent life."—Daniel Goleman, author Emotional Intelligence

"Working with Anger is a wonderful, wise, and life-changing book. Written in Ani Thubten Chodron's characteristic accessible style, generously laced with examples drawn from daily life, the book is filled with practical strategies on how to free ourselves from anger, resentment, and envy. If you are looking for a practical guide to overcome anger and live with greater tolerance, love, and forgiveness, I highly recommend this book."—Howard C. Cutler, MD, coauthor of The Art of Happiness

"Here we have a psychology that leads to true liberation. . . . What I like here is that this work is not just about moralizing and sermonizing, but gives practical, useable techniques to neutralize anger. . . . It has a clarity and simplicity that can only come from someone who actually lives what she writes. Highly recommendable."—Diamond Fire

The following is an excerpt from the chapter of Working with Anger entitled "Mind, Emotions and Anger."

One summer His Holiness the Dalai Lama spoke to a Los Angeles audience that included a group of inner city youth in fatigues, their camp uniforms, together with their counselors. After his talk, one of the youths asked His Holiness, "People get right in my face and provoke me. How can I not fight back?" She was challenging him, but quite sincere in her request.

His Holiness looked her in the eye and said, "Violence is old-fashioned. Anger doesn't get you anywhere. If you can calm your mind and be patient, you will be a wonderful example to those around you." The audience clapped, but the girl remained standing, looking back at him. She wasn't yet satisfied.

The Dalai Lama went on to describe how so many great people -- Martin Luther King, Mahatma Gandhi, and Jesus, for example -- remained peaceful in the face of violence and adversity. Many of them experienced difficulties when they were growing up. "Even I," he said. "My youth was fraught with conflict and violence. Yet all of these people expounded non-violence and love for others, and the world is better for their contributions. It's possible for you to do this too."

He then motioned for the girl to come up and shake his hand. As she approached him with her hand outstretched and a nervous smile on her face, the Dalai Lama opened his arms and hugged her. The girl returned to her seat, beaming.

After the talk, one of the sponsors asked the teenagers if they would share their experience. A burly, tough-looking young man came to the microphone with a huge smile on his face. "Phew," he said, "You must be able to hear my heart beating from where you're sitting! I've seen the Dalai Lama on TV and in the magazines and thought he was pretty cool, but I just can't describe what it feels like to have met him!" and he touched his heart.

A Tibetan monk who had escaped from Communist-occupied Tibet just a few years earlier told me his story. His family was a wealthy, prominent one in the area of Tibet where he grew up. After the Communist occupation of Tibet in 1950 and the subsequent abortive uprising in 1959, his family's house was confiscated and made into a jail. Because his family were landowners and because he was a monk, he was arrested by the Chinese Communists. Then, he was imprisoned in a jail that had once been his home. He and the other inmates were allowed to go to the toilet outdoors twice a day, but otherwise they had to stay in the house, which now had broken windows and none of its former comforts. Most people would have burned with rage at the injustice and humiliation, but this monk told me that he tried to use his time wisely, doing his meditation practices to improve the state of his mind. Although he was deprived of all his religious implements, he silently recited the texts he had memorized and contemplated their meanings. In this way, he familiarized his mind with attitudes and emotions that lead to enlightenment and avoided the pitfalls of anger. When I talked with him, I detected no sign of resentment against the Chinese Communists. He had a profound love of life.

Stories such as these lead us to wonder, "How do they do it?" They are human beings just like us, and although they have faced circumstances much worse than a great many of us have faced-including exile, imprisonment, torture, and the loss of many loved ones-they do not burn with rage or seek revenge. This book is largely a collection of Buddhist methods for subduing and preventing anger that have worked for the Dalai Lama, the monk above, and many others.

There is nothing particularly "Buddhist" about these methods. In fact, many of the Buddha's teachings are common sense, not religious doctrine, and common sense is not the property of any religion. Rather, these methods show us reasonable and beneficial ways to live. No matter what our religion, looking at our minds and learning to work with our anger are helpful.

Anger plagues all of us on a personal, national, and international level. Yet, we see people, such as the Dalai Lama, who have faced circumstances far worse than many of us have faced--including exile, persecution, and the loss of many loved ones--but who do not burn with rage or seek revenge. How do they do it?

Working with Anger presents a variety of Buddhist methods for subduing and preventing anger, not by changing what is happening, but by framing it differently. No matter what our religion, learning to work with our anger is effective for everyone seeking personal happiness as well as world peace.

"In Working with Anger, Thubten Chodron offers us a kind and genuinely helpful guide to handling one of the greatest challenges in living an emotionally intelligent life."--Daniel Goleman, author, Emotional Intelligence

"Working with Anger is a wonderful, wise, and life-changing book. Written in Ani Thubten Chodron's characteristic accessible style, generously laced with examples drawn from daily life, the book is filled with practical strategies on how to free ourselves from anger, resentment, and envy. If you are looking for a practical guide to overcome anger and live with greater tolerance, love, and forgiveness, I highly recommend this book."--Howard C. Cutler, M.D., co-author of The Art of Happiness.

American Buddhist nun Thubten Chodron lives in Seattle and travels worldwide, teaching and leading meditation retreats. She is the author of Open Heart, Clear Mind. and Buddhism for Beginners

Venerable Thubten Chodron has been a Buddhist nun since 1977 and has studied and practiced Buddhism under the guidance of His Holiness the Dalai Lama, Tsenzhap Serkong Rinpoche, Lama Zopa Rinpoche and other Tibetan masters. She is the founder and abbess of Sravasti Abbey (sravasti.org), a Buddhist monastic community in Washington State, USA.

Ven. Chodron emphasizes the practical application of Buddha's teachings in our daily lives and is especially skilled at explaining them to contemporary readers. She is well-known for her warm, humorous, and lucid teachings. Active in interfaith dialogue, she also does Dharma outreach in prisons and teaches worldwide. Visit thubtenchodron.org to access archives of her extensive teachings, and youtube.com/user/sravastiabbey for daily Dharma talks.

"Venerable Thubten Chodron is someone whose life embodies the virtues of kindness, simplicity and clarity of vision, which lie at the heart of the Buddha's teaching. It is these perennial qualities that shine through her writings and touch the hearts of many readers all over the world." - Thupten Jinpa, author and translator for the Dalai Lama
Read more