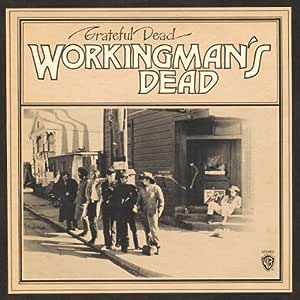 WORKINGMAN’S DEAD: 50th ANNIVERSARY DELUXE EDITION is available as a three-CD set and digital equivalents featuring the original album with newly remastered sound, plus an unreleased complete concert recorded on February 21, 1971 at the Capitol Theatre in Port Chester, NY. The show was mixed from the 16-track analog master tapes by Jeffrey Norman at Bob Weir’s Marin County TRI Studios, David Glasser, along with restoration and speed correction by Plangent Processes. 2/21/71 delivers a plethora of songs from both Workingman’s Dead and the band’s follow-up album, American Beauty. Some highlights include Weir’s moving vocal take on “Me and Bobby McGee,” Pigpen’s whiskey-seasoned growl on “Easy Wind” and a stellar run through “Uncle John’s Band” to close out the show.

This three-CD set includes the original album with newly remastered sound, plus an unreleased concert recorded on February 21, 1971 at the Capitol Theatre in Port Chester, NY. The show was mixed from the 16-track analog master tapes by Jeffrey Norman at Bob Weir’s Marin County TRI Studios and mastered by Grammy® Award-winning engineer, David Glasser. A departure from Grateful Dead’s historically psychedlic & experimental works, WORKINGMAN’S DEAD brought the song craft of Jerry Garcia & Robert Hunter to the forefront in this now iconic Americana album, which will celebrate its 50th Anniversary in 2020.

4.9 out of 5 stars
4.9 out of 5
342 global ratings
How are ratings calculated?
To calculate the overall star rating and percentage breakdown by star, we don’t use a simple average. Instead, our system considers things like how recent a review is and if the reviewer bought the item on Amazon. It also analyzes reviews to verify trustworthiness.
Top reviews

Stuart JeffersonTop Contributor: The Beatles
TOP 500 REVIEWER
5.0 out of 5 stars LIKE A PRESENT FROM GOOD FRIENDS.
Reviewed in the United States on July 10, 2020
Verified Purchase
Originally released in 1970, Workingman's Dead remains one of the Dead's best loved albums. Gone for the most part were the band's take on the blues along with the long psychedelic jams (which I confess I miss since I was lucky enough to hear the band live around the Bay Area in the late '60s-early '70s), but in it's place was something new, something different.

This is the first time that the band really focused on their vocals (after hearing what Crosby Stills and Nash were doing) and it paid off in a big way. Along with the American Beauty album (with cover graphics that can also be read as "American Reality"), the band went in a different direction with a more relaxed kind of sound and feel. And each of the eight tracks on the original album stand alone as some of the nicest sounding music the band ever made.

Disc 1 is the original album in cleaner remastered sound. If you're reading this then you're no doubt familiar with the album, so not much has to be said about how good it is. And while I wish that the accompanying extra music represented more of the original album, this show from '71 is pretty darn good, with four songs from Workingman's Dead and three from American Beauty. Throughout this show are tunes from those albums along with other songs that represent where the band was starting to head. Good versions of "Bertha", "Ripple", "Sugar Magnolia", and other tunes help lay out the band's newer sound. But also here are songs from earlier days like the band's nod to the blues with "I'm A King Bee", plus early stuff like "Cold Rain And Snow", "Beat It On Down The Line", and their take on rock 'n' roll with "Johnny B. Goode". There's a great almost ten minute version of "Wharf Rat", a nice "Truckin'", plus 17 minutes of the dance tune "Good Lovin'". The show ends with a good version of "Uncle John's Band". Taken as a whole this is a great snapshot of the band live in '71.

The discs snap into trays inside the four-fold cardboard package that has a slot for the 14 page booklet plus a track list for each live disc. There's a fairly lengthy essay by noted rock writer David Fricke, a note from producer David Lemieux, and small period photos of the band. Everything fits into a cardboard slipcase which has a really nice looking lenticular graphic of the original cover photo on the slipcase like previous 50th Anniversary editions. And look for the 50th Anniversary edition of of "American Beauty" coming in late October.

Dave Fevertree SigmonTop Contributor: Blues Music
5.0 out of 5 stars The Dead's Masterpiece of Mortal Sin at Fifty
Reviewed in the United States on July 12, 2020
Verified Purchase
The Grateful Dead have been wildly unpredictable in their past music-making, but with "Workingman's Dead" they did the totally unanticipated. It was on this record that they stepped out from the shadows of psychedelic jamming and experimentation. Virtually every song spun a yarn of an American past with an incredibly focused impact.

"Workingman's Dead" illustrates Robert Hunter's enduring sense of frontier myth that dovetails perfectly into Jerry Garcia's living of folk, blues and country and western that's always routed through him. And every one of Jerry's melodies is a knockout. Robert's allusions to the Altamont debacle in the blues groove of "New Speedway Boogie" could have been written during the Gilded Age yet his words have equal pertinence in 2020 - "One way or another this darkness got to give". The riveting "Black Peter" is facing the end of the line. Never has Jerry's voice sounded more emotive than on this cut. It's a cry from the heart and one of the most chill-inducing songs I've ever heard in all my years. And that's a lot of years. This newly remastered sound is brighter than my 2003 copy which was great for then. Now, the guitars and voices ring more clearly.

Discs two and three embrace the Dead's continued fixation in Americana tradition by bringing it to the Capitol Theater stage at Port Chester, NY. Yes, it road-tests new songs such as "Bertha" and "Playing in the Band" which they would improve along the way. In fact, this show documents an emerging picture to their famous "Skull and Roses" live album.

Down one drummer with Mickey Hart, Bill Kreutzmann picks up the slack with his jazzy inflections. Though the concert is more song-oriented, the Dead don't entirely abandon their improvisatory nature. Old standby "China Cat Sunflower" and newly-tried "Bird Song" leap out for the guitar-bass interplay between Jerry and Phil Lesh. Then there's the unforgettable Pigpen who's a magnetic presence on this show. His vocal/harmonica work on Slim Harpo's "I'm a King Bee" is a marvel. Add to that Jerry's extraordinary guitar solo and you get a version that's wholly more believable than the one the Rolling Stones covered in 1964. Pig also injects new life in a great eight-minute blues workout of "Easy Wind". You just know he's got that audience right in the palm of his hand.

In conclusion, "Workingman's Dead" is one of those rare records in my collection that I've always regarded as a stone-cold classic but whose aura has actually intensified. In a cool paradox, it sounds older and fresher each successive time I listen to it. You can safely crack open your wallets for this latest release by this crucially human band. Come hear Uncle John's Band once again.
Read more
34 people found this helpful
Helpful
Comment Report abuse

Christopher Bushman
5.0 out of 5 stars Hats Off To Betty Cantor
Reviewed in the United States on July 13, 2020
Verified Purchase
I am not usually a big fan of remastering projects and although this excellent record sounds great, my old Workingman's Dead CD and used vinyl sounded pretty good too. As much fun as it is to listen to a well-loved record that I haven't pulled out in a while, the two live discs are the big attraction for me. Wow. The Dead have released hundreds of archived shows and they usually sound anywhere between very good to excellent and it just knocks me out that after all of these years releasing the best of the best shows from the archives, they are still able to pull out a 49-year-old concert recorded by hippies on ancient technology in 1971 that sounds as good as anything coming out today. Every band should have a Betty Cantor-Jackson along for the ride!
Read more
16 people found this helpful
Helpful
Comment Report abuse
See all reviews

MJ ROBERTS
5.0 out of 5 stars Marvellous
Reviewed in the United Kingdom on July 11, 2020
Verified Purchase
Had the original album for 50 years & I have run out of praise for this album. Excellent packaging & 3D cover is superb. The live show is another good one from Portchester, I have dozens of versions of the songs on official & unofficial releases, so do I really need some more? Well I bought it so the answer must be yes! Guess the 50th anniversary of American Beauty is next, probably in November. Bring it on.
Read more
One person found this helpful
Report abuse

Mr. Alan F. Hill
5.0 out of 5 stars Good Remaster
Reviewed in Canada on August 12, 2020
Verified Purchase
I’m no deadhead - like some of their music but not all- but this country/folk Americana album has always done it for me. The remastering is excellent- lovely clear sound - with the bass really coming through. First heard this in 1981 ( it seemed old then) and now rediscovering all over again.
Read more
One person found this helpful
Report abuse