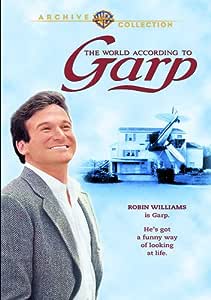 $11.24
& FREE Shipping on eligible orders. Details
Sold by: Amazon.com
Have one to sell?
Sell on Amazon

World According To Garp, The

Academy Award winner Robin Williams, Glenn Close and John Lithgow star in this film based on John Irving's expansive, offbeat best-selling novel. When Jenny Fields (Close) decides to become a mother, she has no intention of finding a husband or of having marital sex, so she gets herself pregnant by a hospitalized solder on his deathbed. And so begins the unusual life of Garp (Williams), who is destined to be anything except what he himself desires most... to be normal.

4.6 out of 5 stars
4.6 out of 5
1,468 global ratings
How are ratings calculated?
To calculate the overall star rating and percentage breakdown by star, we don’t use a simple average. Instead, our system considers things like how recent a review is and if the reviewer bought the item on Amazon. It also analyzes reviews to verify trustworthiness.
Top reviews

J. Horton
4.0 out of 5 stars Great Mother and Son movie.
Reviewed in the United States on October 3, 2019
Verified Purchase
Always loved this movie. It was a major bonding thing between my mother and I which oddly paralled Jenny and Garp. My mother passed away a few years back and I can't help but feel her with me when i watch this, but enough about me. This movie is a fantastic adaption of the novel. I recommend highly reading the novel if you never have, it only deepens my love for the movie.
Read more
12 people found this helpful
Helpful
Report abuse

Francis Booth Lynch
3.0 out of 5 stars A rare character bio
Reviewed in the United States on June 21, 2020
Verified Purchase
Movie 3 of 1982
3 and 93 overall in my journey through films of my lifetime.

"The World According to Garp" is a part of a grouping of movies that I've "heard about." Most people don't remember exactly how they heard about them, and usually they don't even mean it literally, or perhaps they merely made a mental note upon mention of a film. For me I actually remember where I was and even who suggested the film sometimes. I don't have some great memory or anything I just remembered wierd things. I was in middle school when I heard about this one. As one may have noted I have several motivating movies that inspired me to engage in this retrospective. "The World According to Garp" is in the top five movies that made me want to go back and catch up. I did see a scene from the film which I will call "the driveway scene" and it made me want to try this for years. I'm actually excited that I have finally arrived at this movie.

If I had seen "The World According to Garp" when I had heard about it I would have loved it. As it is I'm disappointed. Maybe it's because "Forrest Gump" did it better. I don't think so though. The movie that kept running through my mind was "Dazed and Confused." Threads of commonality are few between the films almost to the point of non sequitur status. They do have one major thing in common: they are pointless. I love "Dazed and Confused" though. "The World According to Garp?" Not so much. Probably because it's a little preachy. Also there is a minor theme of lust and family but no real meaty thoughts on the matters. Despite the bizarre philanthropic commune with its cast of carnival outcasts I found the movie to be quite normal and I think there lies the better part of my dissapointment. Although it tackles some major social issues I found it to be thin in dealing with intellectually weighty issues.

A way in which I've changed over the years is that I no longer enjoy obvious connections. The old adage goes "if you see a gun in act one it must go off by act three." I fully endorse this but I like it to be subtlet. Nothing is subtle in this story and it's connections may as well come with big red circles reminding you of how everything nearly dovetails together. When it's this blatant it is just contrived.

Robin Williams definitely showed his stuff here. He's charming and his acting is intense and compelling to watch. He was a treasure.

AnaKarina
5.0 out of 5 stars Wonderful Robin Williams gem
Reviewed in the United States on December 2, 2020
Verified Purchase
This movie is a gem. I considered myself a true Robin Williams fan ... but I had never heard of or seen this film. Such a great film & a wonderful message. Granted some of the views and lines of some of the characters are questionable and problematic today but it puts a lot into perspective of what was acceptable at the time the film was made regarding gender specific roles, expected, accepted and allowed behavior.
Read more
2 people found this helpful
Helpful
Report abuse

@CHESSNUT
3.0 out of 5 stars Read the novel instead...or at least read it first.
Reviewed in the United States on August 25, 2015
Verified Purchase
While there is nothing wrong with the movie per se, and it does a fine job touching and condensing major plot points of the novel, it is a very shallow treatment. There's simply too much material to work with, and all of the depth and nuance is lost in the process. I recommend reading the novel instead.

The movie is most worth watching for some fine, early performances: an early, serious Robin Williams; Mary Beth Hurt; Glenn Close's first role on film (she had been a stage actor previously); a funny yet tender portrayal of Roberta by John Lithgow.
Read more
5 people found this helpful
Helpful
Report abuse

larry baer
5.0 out of 5 stars This has long been near the top of my favorite movies list
Reviewed in the United States on August 15, 2014
Verified Purchase
This has long been near the top of my favorite movies list. I had read John Irvings novel and was quite excited to see the movie coming out(wayyyy back in '82) but approached viewing it cautiously given that in my experience, most movies based on novels I'd read, were mere shadows of the book...generally disappointing. George Roy Hill hit a grand slam homer directing this one! Somehow he managed to weave all the quirky twists and convoluted turns Irving novels are noted for into this cinematic tour de force in ways that I found often surprising -delightfully so- even though I knew the story lines. He(Hill) got it all! This is a movie for the ages, It covers an array of topical issues we still wrestle with today in our society in ways that are uniquely provocative. And it is one of the most unpredictable movies I've yet experienced.
There are a few scenes that some might find uncomfortable watching with their elderly mothers or fathers if you catch my drift. But hey...ya gotta see this movie! I immediately ordered it for streaming through Amazon to honor Robin upon hearing of his tragic passing and watched it that night which made one scene I'd not noticed before( having owned and watched this movie in another now obsolete format many times) so poignant. It occurred at the 1hour and 30 minute mark of the movie and was a family scene in the kitchen with Garp(Robin) making a comment on that day that left me - well- I stilled the video at the conclusion of his monlogue to catch the one face of Robin Williams I will always remember him by- I hope you tune it in.
Read more
7 people found this helpful
Helpful
Report abuse

Fremont Williams
5.0 out of 5 stars The death of Robin Williams prompted us towatch one of his earlier dramatic roles and we found ...
Reviewed in the United States on September 22, 2014
Verified Purchase
The death of Robin Williams prompted us to watch one of his earlier dramatic roles and we found this movie very entertaining. I read the book by John Irving many years ago but had never seen the film. Both are excellent. From Garp's unusual conception to his coming of age and falling in love, the story will have you laughing and crying. You will learn about Ellen James and the cult following of women who felt sympathy for her and became "Ellen Jamesians" by cutting out their tongues. This is a movie for adults since it does have scenes of sexuality and violence. Robin Williams was known more for his amazing comedic talents but he was equally adept in the many dramatic roles he played during his long and productive career.
Read more
2 people found this helpful
Helpful
Report abuse
See all reviews

Amazon Customer
5.0 out of 5 stars Ahead of its time sexual meloidrama
Reviewed in the United Kingdom on November 7, 2017
Verified Purchase
Ahead of its time in terms of sexual orientation and liberal sentiments. However, some behaviour in the film might be seen by some people as offensive . Bob Trueman
Read more
Report abuse

Old Film Fan
2.0 out of 5 stars Goog Garp
Reviewed in the United Kingdom on December 25, 2017
Verified Purchase
A film that is well up to Robin William's high standard. I am surprised that it is not better known among Classic Film fans.
Read more
Report abuse

Johnny Rocker
4.0 out of 5 stars Not Sure Whether To Laugh Or Cry With This One...?
Reviewed in Canada on January 11, 2020
Verified Purchase
Definitely a strange movie that takes everyone out of their comfort zone. Young Garp is born to single strong headed nurse Jenny Fields (Glenn Close) As young Garp grows, he's directed and protected by his mother as to what he should like, and the evils of sex. As Garp becomes a young man (Robin Williams), he falls for Helen (Mary Beth Hurt) and plans on being a successful writer. But Jenny doesn't want to be out done by her son, and writes her own tome of feminist righteousness that becomes a published hit. While Garp struggles getting noticed for his own writing, he does marry Helen, and has seemingly cozy cheerful life. But, it only lasts for so long - as Helen becomes a high school teacher and begins having an affair with one of the students. Garp himself maybe no saint in the hi-fidelity dept. either. When Garp learns of the actual affair, he goes ballistic. Causing serious injuries to himself, wife and lover, and the death of one of his sons. All recouping at mother Jenny's affluent seaside house and feminist commune, Garp comes across Roberta (John Lithgow) A transvestite with a wonderful disposition. As Garp and Helen heal their relationship, more tragedies ensue, yet bringing everyone closer together. So not sure where this movie exactly stands on it's entertainment merit? It has a few funny moments in subtle and sick ways. It's romantic in a most awkward way. Socially political without being radical. And mostly very dramatic, sudden and sad. In one way, it's rewarding as a viewer to be 'the fly on the wall' to witness these characters and events as they unfurl in their lives. But in another, it's an uncomfortable attachment, as one can never really like or dislike the characters at the best or worst of times. A peculiar look at human nature and how humans cope with it. Somewhat in a surreal sense, and mostly in a natural sense. The same kind of adventure as Slaughter House Five in a way, but with a more ambiguous ending. One just never is totally sure.
Read more
Report abuse
See all reviews