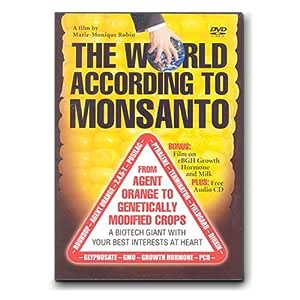 The World According to Monsanto

Monsanto's controversial past combines some of the most toxic products ever sold with misleading reports, pressure tactics, collusion, and attempted corruption. They now race to genetically engineer (and patent) the world s food supply, which profoundly threatens our health, environment, and economy. Combining secret documents with first-hand accounts by victims, scientists, and politicians, this widely praised film exposes why Monsanto has become the world s poster child for malignant corporate influence in government and technology. A film by Marie-Monique Robin. This DVD also includes a bonus film on rbGH by Jeffrey M. Smith, and the audio CD, Don t Put That in Your Mouth.

The World According to Monsanto is an in-depth look at the domination of the agricultural industry from one of the world s most insidious and powerful companies. A bold, brilliant film and a definite must-see for anyone who is interested in learning more about the multi-billion dollar, omni-powerful, and highly dangerous Monsanto.

French filmmaker Marie-Monique Robin spent some 20 years hearing about Monsanto before she set out to understand just what Monsanto was all about. Robin posits that perhaps the company s past can shed some light on what the company is all about today. Monsanto started out as one of the world s largest chemical companies and is responsible for the creation of Agent Orange (used during the Vietnam War), Aspartame, Bovine Growth Hormone, Polystyrene, PCBs and GE crops (genetically-engineered).

No other filmmaker has ever created such a compelling and damning case against Monsanto. The only other individual to come close to exposing the ugly reality of Monsanto s contribution to the planet is best-selling author Jeffrey Smith with his book Seeds of Deception .

Monsanto s leading product is Roundup - the world s best selling herbicide for the last 30 years. Monsanto is also the world s leader in biotechnology, with over 90% of the genetically modified organisms grown on the planet belonging to them. Most are modified to resist the application of Roundup technology

Roundup Ready Soy Beans account for 90% of all the soybeans grown in American.

When Roundup as introduced in 1974, the success of the product was, in part, due to its claims of being biodegradable, and that the product leaves the soil clean and is good for the environment. Monsanto was twice found guilty of false advertising. Monsanto has now removed the word biodegradable from its labels.

Monsanto's PCBs also have a lethal legacy. Robin interviews individuals in Pennsylvania who suffered serious health affects from Monsanto s PCB production plant. In 2001, 20,000 residents filed two lawsuits against Monsanto seeking compensation for the negative effects of the PCBs. Monsanto settled by paying $700 million dollars to build a special hospital, compensate the victims, and clean up the contaminated site. David Carpenter, the foremost expert on PCBs explains how the entire world is now contaminated with PCBs. They have gone into the water and into the air.

70% of the food in American stores contain bio-engineered elements.

Monsanto s GMOs, perhaps the products that are causing the most concern with activists around the globe, were only introduced in 1996 when their Roundup Ready Soybeans were approved for use in the USA. Today, less than 12 years later, Roundup Ready Soy Beans account for 90% of all the soybeans grown in American. 70% of the food in American stores contain bio-engineered elements. There is no labeling of genetically modified foods in the USA.

[Filmmaker Maria-Monique Robin] Monsanto also created the controversial Bovine Growth Hormone (rBHG), which is a transgenetic hormone injected into cows to increase milk yield. Monsanto was involved in a major bribery scandal in Canada over their attempts to bribe Health Canada workers into suppressing rBHG data. Eventually, Canada did not approve the drug for use in Canada. The European Parliament has disapproved its use.

Marie-Monique Robin has left no stone unturned in the Monsanto story. She interviews every authority on the subject (both pro and anti-Monsanto), traces American policy-making that allowed Monsanto to prosper and shows how many individuals who have worked to approve the technology.... --Green Muze

By all means, the deluge of damning information, string of political intricacies and overall ominous tone of the latest documentary by French journalist and director Marie-Monique Robin, "The World According to Monsanto," should have put me to sleep. But it didn't. In fact, it kept my stomach literally churning. The film, a National Film Board of Canada co-production, meticulously details the manipulative deeds of Monsanto Co., one of the world's biggest agrochemical-biotech companies, on its route to global domination by tracing a trail of evidence, cover-ups and tragedies from the American heartland and beyond. Notorious for its development of hazardous chemicals such as Agent Orange, PCBs (now banned) and the recombinant bovine growth hormone (rBGH), Monsanto is now also known for its monopoly on genetically modified (GM) seeds of food crops such as corn, wheat and soybeans. Despite the uncertainty of the long-term health effects of consuming and growing GM foods, the company's GM seeds are now widespread in much of North and South America. Non-labeling and genetic contamination The film documents the beginnings of the company as a chemical start-up in the early 1900s, producing saccharin, caffeine and vanillin. As we watch Robin Google up unclassified documents and interview a bevy of officials, scientists and farmers, we see that today's Monsanto is a giant multinational wielding its considerable financial, political and marketing clout to influence government officials, ruthlessly sue farmers using patent laws all the while surreptitiously lobbying to keep their potentially toxic products unlabelled or falsely advertised. Monsanto claims that their genetically modified seeds will solve the food crisis, especially in developing countries, where it will provide significant economic benefits, higher quality and better yield. Nevertheless, the film compellingly shows the unsettling possibilities of genetic contamination of conventional or local varieties of seeds by their genetically-engineered cousins, pointing to a horrific future where global plant biodiversity is nil and farmers are not able to grow anything but genetically contaminated food. It's a terrifying thought. But perhaps Monsanto's agenda is even simpler than all their lofty claims put together. As one farmer puts it, "The reason they do it is control. They want to control seed. They want to own life. I mean, this is the building blocks of food we are talking about. They are in the process of owning food, all food." Genetically modified seed "more powerful than bombs" And what of the future of global food security? In one interview, eco-activist Vandana Shiva asserts: "The second Green Revolution has nothing to do with food security ... it is about returns to Monsanto's profits... patenting is the real aim. If you look at Monsanto's research agenda, they are testing something like twenty crops at this point with BT (Bacillus thuringiensis) genes. There's nothing that they are leaving untouched the mustard, the okra, the rice, the brinjal (eggplant), the rice, the cauliflower once they have established the norm that seed can be owned as their property, royalties can be collected, and we will depend on them for every seed we grow, for every crop we grow. If they control seed, they control food... it's strategic, it's more powerful than bombs, more powerful than guns, and it's the best way to control the populations of the world." Importance of labelling genetically modified foods Despite the rather dismal picture it paints, the film does an excellent job in digging up and piecing the facts together, much of it easily available online (Robin also wrote a book, Le Monde Selon Monsanto, based on her investigations)... --Montreal Mirror

Since her directing debut in 1989, filmmaker Marie-Monique Robin has received 20 awards for her investigative documentaries filmed around the world. She is the recipient of the prestigious Prix Albert Londres, equivalent to the French Pulitzer, and a recent film, Death Squads : The French School, broadcast on Arte and Canal+ television networks in Europe, received the Laurier du Sénat (The Senate Laureate, The Award for the Best Political Documentary), FIGRA s Best Investigative Documentary Award, The Award of Merit from the Latin American Studies Association (LASA / United States), and The Critics Award at Cairo s Cinema Festival, among others. Her book The Photos of the Century: 100 Historic Moments has more than 700,000 copies in print in seven languages.

Ms. Robin spent three years working on The World according to Monsanto, beginning with four months of intensive internet research examining declassified documents, leaked internal files, scientific studies, trial transcripts, articles, and first hand accounts of whistleblowers. The film actually shows Ms. Robin doing internet searches, identifying incriminating documents that are also available to everyone. She then takes us with her to four continents where she verifies the information and sheds more light on Monsanto s outrageous behavior and impact.

The film debuted in Europe in February 2008, and has since been shown in 15 countries and purchased by 20 international channels. Her accompanying book, which came out at the same time, became an immediate bestseller in French, and is being translated into 10 languages. The revelations in her film and book have generated a wave of anti-GMO and anti-Monsanto sentiment worldwide.