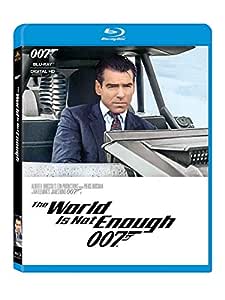 Secure transaction
Your transaction is secure
We work hard to protect your security and privacy. Our payment security system encrypts your information during transmission. We don’t share your credit card details with third-party sellers, and we don’t sell your information to others. Learn more
Details
Ships from
Amazon
Sold by
muboutletstore
The+World+Is+Not+Enough+%5B... has been added to your Cart

The World Is Not Enough [Blu-ray + DHD]

Only James Bond can stop a megalomanical enemy who has concocted a deadly scheme to control the world's oil supply in this explosive, action-packed adventure.

4.5 out of 5 stars
4.5 out of 5
1,960 global ratings
How are ratings calculated?
To calculate the overall star rating and percentage breakdown by star, we don’t use a simple average. Instead, our system considers things like how recent a review is and if the reviewer bought the item on Amazon. It also analyzes reviews to verify trustworthiness.

Saved by Grace!!!
3.0 out of 5 stars I rank it 4th out of the 4 Pierce Brosnan films.
Reviewed in the United States on March 13, 2018
Verified Purchase
My least favorite of the Pierce Brosnan series. It's a good story, with good actors, but something was just off about the whole thing. It felt rushed. The quick wit and dry humor of normal Bond films was there but felt contrived. Even the action scene looked a little on the low budget side. If you're a fan of the franchise though, you'll still want to add it to your collection.
Read more
6 people found this helpful
Helpful
Report abuse

And KILL a rather talented actor's career.

Had HIGH HOPES for Casino Royale and wasn't disappointed.

It may be time for Bond to die an honorable death.
Read more
One person found this helpful
Helpful
Report abuse

GreenEnvy2020
4.0 out of 5 stars Great Movie but it didn't came with the digital copy code
Reviewed in the United States on January 3, 2018
Verified Purchase
This movie arrive on time and was in great condition.And it was wrap in plastic so you know that it hasn't been open.When I open the DVD case the code to digital code was not inside.Which sucks I bought another James Bond Film and it came with the codes.But I give it 4 stars but I really loved this movie.I was also a little disappointed that Denise Richards didn't put a little bit more effort on her role in the movie.Sophie Marceau did outstanding job on her role in the movie.
Read more
6 people found this helpful
Helpful
Report abuse

joel wing
TOP 500 REVIEWER
1.0 out of 5 stars Uninspired story started the beginning of the end of Brosnan as Bond
Reviewed in the United States on April 21, 2020
Verified Purchase
The title of this Bond films harkens back to the 1969 On Her Majesty’s Secret Service. Bond was posing as an expert in heraldry and had a family crest made up for the role. The Bond family’s motto was The World Is Not Enough. Unfortunately, this was the beginning of the end for Pierce Brosnan as James Bond. His first film, Golden Eye was good, and then Tomorrow Never Dies was his best effort. World Is Not Enough and Die Another Day however were really bad.

The problems start with the Bond girl who is Denise Richards as nuclear physicist. She was really bad at that role. Not only that, but there was just no flare to this film. The action was okay but not great. The story wasn’t that inspired and just fell flat. The bad writing and production would continue into Die Another Day and mark the end of Brosnan as Bond.
C
Read more
Helpful
Report abuse

greg
4.0 out of 5 stars Sophie is so engaging
Reviewed in the United States on December 6, 2020
Verified Purchase
As many will say Brosnan is not Sean Connery. And he isn't . He doesn't look like he could beat his female counterpart in a fair fight. Supporting cast is great and so is the story line, which has a few dozen twists and turns. It's a bit demeaning to the audience that Bond has to spell out Stockholm Syndrome for all of us, But I think it's a nod to how poorly educated ,we Americans truly are. Sophie owns the screen in most every scene, save when M is present. Nice intro of John Cleese to the franchise. Good action and chase scenes, required for any Bond film. The fighting scenes not so much. And how does Bond know so much about an old Russian sub? Am I Satisfied? Yes, even with the cheesy line about Christmas only coming once every year at the end of the flick. Do I need Brosnan? No ! Swap in Daniel Craig to get 5 stars.
Read more
Helpful
Report abuse

Edward H. O'Donnell
3.0 out of 5 stars Review
Reviewed in the United States on May 6, 2020
Verified Purchase
Tomorrow Never D ies was much better. Goldeneye was finer as well. The first two films were more serious and had a better flow. They attracted and maintained the attention of the viewer more effectively. The cinematography and acting in the first two films was also superior. As someone whom is interested in Law Enforcement and Intelligence Agency Careers, I found the first two movies more inspiring. However, the theme of nuclear terrorism was very relevant and thought provoking for this day and age. Goldeneye 7.5, Tomorrow Never D ies 7.5, The World is Not Enough 6.3.
Read more
Helpful
Report abuse

J S G 57
5.0 out of 5 stars This is the PSP umd, not a DVD.
Reviewed in the United States on January 31, 2019
Verified Purchase
Great movie. Kinda dated, but I think I like Pierce Brosnan in this. The way he straightens his tie while in a boat underwater is hilarious though subtle. Still kinda stiff, but good to see him in action anyway. Nice snow chase scenes. I like the snow chase even though you could say Roger Moore did it first. I miss Desmond Llewellyn as Q. Very telling, the scene about retirement. And I loved the back and forth with this version of Moneypenny. A lot of innuendo between them and I miss that.
Read more
One person found this helpful
Helpful
Report abuse

Lynda Dunbar
4.0 out of 5 stars Not Too Bad
Reviewed in the United States on December 8, 2017
Verified Purchase
Bought this for my husband, who likes James Bond. Although he prefers the ones with Sean Connery, we have most of the 007 movies. I'm trying to complete the collection. I do watch them with him though. This one was ok. Had some humor and lots of action. If you like James Bond movies, we would definitely recommend this one.
Read more
3 people found this helpful
Helpful
Report abuse
See all reviews

Scrooge McDuck
3.0 out of 5 stars This movie is not enough
Reviewed in the United Kingdom on February 23, 2020
Verified Purchase
Probably the most inconspicuous movie of Brosnan's tenure as James Bond, for all of its stupidity, Die Another Day gets talked about much more, while TWINE seems to go under the radar. Released towards the end of the decade/century/millennium the movie doesn't seem to anticipate the new beginning right around the corner and instead recycles ALL of its ideas from previous Bond entries.

This time around Bond is assigned to protect Elektra King, the daughter of a recently-assassinated oil magnate who was previously at the mercy of a failed MI6 operation and left in danger by M, who gambled with her life to no reward. Perhaps if they had used an already established character and brought back an actress from a past movie this might have worked better, but with only two movies under his belt, and a soft reboot, this was not practical for Brosnan.

The pre-credits sequence is the most exciting part of movie, putting its best action up front and filling the remaining running time with lower-key espionage and suspense, which is okay, I suppose. Initially protective of Elektra, Bond becomes suspicious the more he investigates the villains attacking her new oil pipeline, led by Renard (a wasted Robert Carlyle), a terrorist with a bullet in his brain who cannot fail pain or fear. Nothing is done with this, and he's one of the weakest villains of the series.

Neal Purvis and Robert Wade clearly had no ideas or inspiration when it came to churning out the screenplay. It feels more like a Bond movie than the generic techno-thriller that was Tomorrow Never Dies, but as I said we've seen all of this before. Speedboat chase, check. Oil pipeline action, double check. Ski chase, quadruple check. Submarine action, check. Disarming nuclear warheads, check.

It does bring back Robbie Coltrane as Valentin Zukovsky, which is a bonus, but there's few highlights here. It's not a bad film, just lacking any real spark and an awkward movie to close out the millennium on. Apparently it ran at 160 minutes before being cut down to 128 at the last minute, as if it wasn't slow enough, I can't imagine a longer cut being more interesting, the workman-like nature of the screenplay is the movie's biggest failing.

The movie looks pretty damn good in 2.35:1 1080p despite coming from an old master. TWINE was shot by acclaimed cinematographer Adrian Biddle (his only Bond movie) and is the last in the series to be fully shot in anamorphic Panavision before they switched to Super35 and then to digital. The DTS HD-MA sound is also very good, with active surrounds. David Arnold once again provides an exciting score and might be his best of his own tenure. Extras are plentiful.
Read more
One person found this helpful
Report abuse

Markku Ylipalo
4.0 out of 5 stars The world's just fine
Reviewed in Canada on May 4, 2000
Verified Purchase
Finally pre- cold war Bond-film with great tune and even better cast. Of course, Pierce Brosnan can't win when copared to Sean Connery, but in spite of wonderful cast, he's better than Roger Moore. Robert Carlyle, Robbie Coltrane and Judi Dench cant help it: Brosnan looks like an extra when compared to them. Denise Richards and Sophie Marceau are like Brosnan: you can barely tell them from the backround. Good actors and good theme make this the best Bond of Brosnan (no thanks to Brosnan himself!). p.s. John Cleese makes a wonderful cameo as R. I'm glad he will be the one to replace Desmond Llewellyn (may he rest in peace).
Read more
Report abuse

Yes
5.0 out of 5 stars Underappreciated - Give it a chance
Reviewed in the United Kingdom on October 21, 2017
Verified Purchase
A very great, and underappreciated bond flick. Bronson's performance as bond was absolutely wonderful and the story was compelling, honestly I feel that the world is not enough is just as great as Goldeneye, so give it a chance your be surprised.
Read more
4 people found this helpful
Report abuse

Mr Neil J Tostevin
3.0 out of 5 stars Good, not great
Reviewed in the United Kingdom on October 30, 2019
Verified Purchase
Brosnans 3rd outing as 007 and his 3rd best. Here he battles against the brilliant Robert Carlisle while trying to protect a billionaires daughter and prevent a nuclear meltdown
Read more
Report abuse

Iwona
5.0 out of 5 stars Very entertaining and good quality
Reviewed in the United Kingdom on October 9, 2020
Verified Purchase
I bought it for my son and he loves it.
He he’s all James Bond movies.
Read more
One person found this helpful
Report abuse
See all reviews