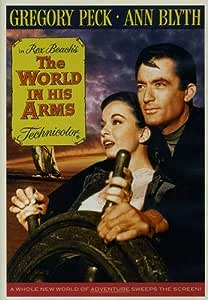 The World in His Arms

Whether on land or sea, the adventures never stop in the thrill-packed epic adventure, The World in His Arms. Set in 1850, Gregory Peck stars as swaggering sea captain Jonathan Clark who poaches seal pelts off the coast of Russian-owned Alaska. However, the real danger begins upon returning to San Francisco where he falls for a countess (Ann Blyth) fleeing from her engagement to a greedy Russian prince (Carl Esmond). When Clark learns of her kidnapping, he sets sail – amid gale force winds and treacherous seas – on a harrowing race to rescue his lady love and beat his longtime rival (Anthony Quinn). Featuring breathtaking action sequences, soaring cinematography and bawdy humor, this exciting classic is one to enjoy again and again.

4.6 out of 5 stars
4.6 out of 5
132 global ratings
How are ratings calculated?
To calculate the overall star rating and percentage breakdown by star, we don’t use a simple average. Instead, our system considers things like how recent a review is and if the reviewer bought the item on Amazon. It also analyzes reviews to verify trustworthiness.

Peck plays The Boston Man, a clipper captain, making a living as a seal hunter in Alaska. Minor problem: Alaska isn't american and the activities of The Boston Man is a thorn in the eye of the russian governor. To complicate matters Peck falls head over heels in love with a russian countess - played by Ann Blyth.

She is trying reach Alaska and her uncle, the governor, just two steps ahead of an unwanted fiancé and an undesirable marriage, arranged by the Zar himself.

The Boston Man's solution: Crush the competition and buy Alaska.

Also starring Anthony Quinn, as a bit of a pirate and The Boston Man's less succesful seal hunting competition.

Chrijeff
5.0 out of 5 stars Off to Russian America
Reviewed in the United States on June 19, 2012
Verified Purchase
Previously available only as part of a box set of Peck films, this is a lesser-known example of the actor's work that doesn't deserve its fate. Filled with action, color, and romance, it's set during the 1850's, when Alaska belonged to Russia and foreigners took their lives in their hands if they ventured to the foggy Pribilof Islands in search of fur-seal pelts. Among the most notorious (in the Russians' opinion) and successful of these is Jonathan Clark (Peck), "the Boston man," captain of the two-masted schooner "Pilgrim of Salem," which can outsail any craft in Sitka. Though he appreciates the money to be had by sealing, Clark is a forward-looking man and realizes that the unrestrained methods practiced by the Russians will exterminate the seals before too long, so he conceives of a bold plan: assemble a syndicate of wealthy San Franciscans to buy Alaska--Pribilofs and all--and then limit the kill to the "bachelor" seals, the excess young males who don't have harems and usually die without reproducing anyway. So off to Gold-Rush-era Frisco he goes to hobnob with the wealthy, and there he meets a "little Russian girl" and falls head over heels in love. What he doesn't know is that she's the Countess Marina Selanova (Ann Blyth) and is fleeing from an arranged marriage with Prince Semyon (Carl Esmond), a nephew of the Czar, whom she hates. Her only hope is to get to Sitka, where her Uncle Ivan (Sig Ruman) is the Governor and may be able to provide her with protection. Knowing that Clark has a ship, her first thought has been to maneuver him into allowing her to charter it--but she falls just as hard for him. Then Semyon follows her to San Francisco aboard the Czar's brand-new steam-driven gunboat and literally kidnaps her out of the hotel, leaving a bewildered Clark waiting at the altar. Not until, having nothing left to lose, he heads back to Alaska and is captured and thrown into prison, do they meet again and he learns the truth. And when Marina agrees to marry Semyon if he will free Clark and his crew, Clark realizes how much she truly loves him. Now Semyon has made an enemy he'll live to regret.

Besides the love story and the environmental message (which suggests that it really is possible for even high demand to walk hand in hand with a sensible stewardship of the world around us), this movie has several other things going for it: the San Francisco scenes, ranging from the shanghai dens of the Barbary Coast to a luxury hotel filled with both the young city's Best People and some of its raunchiest (like Clark's friend, saloonowner Mamie (Andrea King)); a sea race between two sealing craft; several good brawls; and an array of lesser characters including Clark's educated first officer, "Deacon" Greathouse of Nova Scotia (John McIntire); his master harpooner the Aleut Ogeechuk (Bill Radovich), whose sole command of English seems to amount to "We go!"; Eustace (Hans Conreid), the snooty hotel owner who finds himself coping with Clark, his boisterous crew, and the less-than-staid followers they bring with them; Marina's companion and kinswoman Anna (Eugenie Leontovich), prone to vapors and hysterics, and her bodyguard, Col. Paul Shushaldin (Gregory Gay); and above all Anthony Quinn as "the Portygee," captain of the "Isabella," a laughing, brawling, larcenous pirate of a sealer who's nevertheless, as even Clark admits, "a good sailor," and who when the chips are down proves a loyal and valuable ally--a role that should have won him at least a nomination for Best Supporting Oscar. This has been a favorite film of mine since I stumbled across it on TV many years ago, and I was delighted to find it available on a free-standing DVD.
Read more
4 people found this helpful
Helpful
Comment Report abuse

JHB-4
5.0 out of 5 stars "The World in His Arms"-- Gorgeous restoration. Fun Universal programmer. Great double feature with:
Reviewed in the United States on September 1, 2020
Verified Purchase
...... with Universal's "Bend of the River." The two were a perennial double bill throughout the 1950s (both Universal, both 1952 releases) with great performances by Gregory Peck, Ann Blyth and Anthony Quinn ("World") and by James Stewart, Arthur Kennedy and Julie Adams ("Bend" ). A wonderful way to spend a family evening!
Read more
Helpful
Comment Report abuse

Ed Brodow
5.0 out of 5 stars An Almost Forgotten Gem
Reviewed in the United States on October 16, 2010
Verified Purchase
I just bought the DVD and this engaging film is just as exciting today as it was when I first saw it as a boy. Seems I have a soft spot for these adventure movies (see my review of His Majesty O'Keefe). Gregory Peck was never better in this well-written story of a bigger-than-life sea captain in 1850 who dreams of buying Alaska from the Russians. His worthy love interest is the charming Ann Blyth. The supporting cast is impeccable, with Anthony Quinn (obviously enjoying himself), John McIntyre, Hans Conreid, Carl Esmond, Rhys Williams, Peck's crazy eskimo side-kick, and a scene-stealing seal by the name of Louise. The highlight of the movie is the hair-raising and beautifully filmed schooner chase up in the Pribilov Islands off the Alaskan coast. Raoul Walsh knew how to direct these entertaining swashbucklers better than just about anyone. I hate to say it, but they just don't make them like this anymore, a pity. Add in the incredible musical score by Frank Skinner, truly unforgettable as it was the memory of the music after all these years that motivated me to buy the DVD.
Read more
2 people found this helpful
Helpful
Comment Report abuse

Susie Giamalva
5.0 out of 5 stars Great Adventure Story
Reviewed in the United States on June 15, 2016
Verified Purchase
I have been waiting a long time for this movie to be made into DVD. Delightful and beautiful story. Great chemistry among all the actors, especially Gregory Peck, Ann Blyth and Anthony Quinn. Very funny, too.
Read more
One person found this helpful
Helpful
Comment Report abuse

Diane
4.0 out of 5 stars Who's not to like Greg Peck
Reviewed in the United States on January 28, 2014
Verified Purchase
This was a fun movie. The colors were brilliant--I guess that was the era of technicolor. I did not think Ann Blyth was that great; but Greg Peck made up for it. Altogether, a fun move. I liked the scenes where the ships were obviously really at sea; it makes up for the scenes when the actors are in front of projection. The seals shot toward the end were fantastic. I also loved the Russian dances.
Read more
One person found this helpful
Helpful
Comment Report abuse
See all reviews

Mr. W. ROGERS
5.0 out of 5 stars SEA DRAMA
Reviewed in the United Kingdom on November 6, 2014
Verified Purchase
this dvd is very good and worth buying, good sound good print and good story line . Gregory Peck plays a good part as captain of his ship, and all cast play excellent parts there is a wonderful music score also i cant find any faults with this movie so buy now and watch it over and over again . SOME GOOD FIGHTS IN THE FILM IF YOU WANT ACTION .
Read more
3 people found this helpful
Report abuse

Vilmin S
5.0 out of 5 stars A GEM
Reviewed in the United Kingdom on October 5, 2011
Verified Purchase
This is a gorgeous movie, with fantastic actors (all of the cast, leads and supporting, one of the marks of the glorious forties and fifties) and great action, all this dynamically filmed by the great Raoul Walsh.
To be watched and remembered with  Captain Horatio Hornblower [DVD] [1951] [Region 1] [US Import] [NTSC ].
The dvd transfer is very good.
Read more
5 people found this helpful
Report abuse