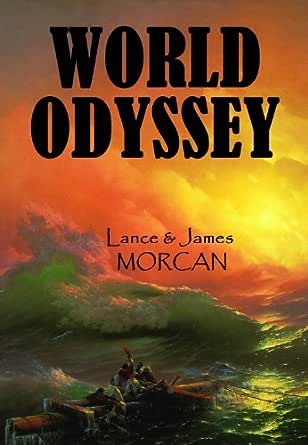 You've subscribed to The World Duology! We will preorder your items within 24 hours of when they become available. When new books are released, we'll charge your default payment method for the lowest price available during the pre-order period.
Update your device or payment method, cancel individual pre-orders or your subscription at
Your Memberships & Subscriptions
There was an error. We were unable to process your subscription due to an error. Please refresh and try again. 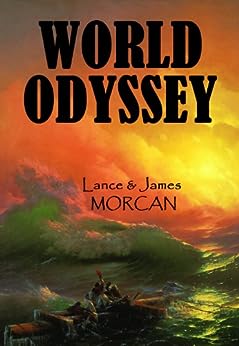 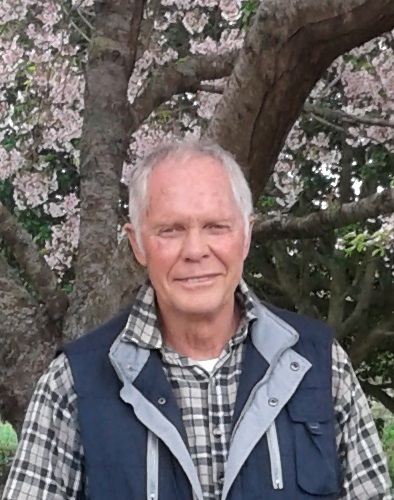 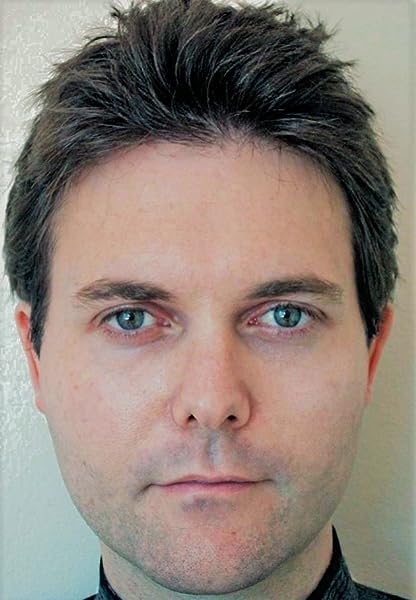 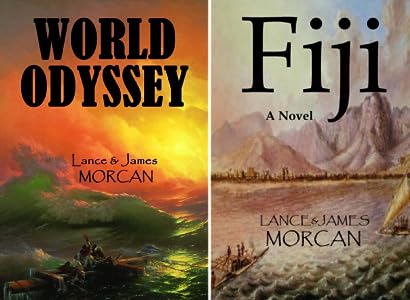 ★★★★★ "World Odyssey is a sweeping historical saga"
-Karine Brégeon (author of 'Francette and the Mystery of the Deaf Soldier')
★★★★★ "A Totally Engaging Epic!" -Historical Novel Review
★★★★★ "Get ready to sail the high seas" -Remy Benoit (historian and author of 'Peace, Now')
★★★★★ "A must read for any and everyone!" -A Bit Of Everything Reviews
★★★★★ "A wonderful read filled with adventure, tragedy, hope, struggles and overcomingthe odds"
-Lynelle Clark (author of 'A Pirate's Wife')
★★★★★ "Recommended for globe-trotting adventure fans" -Jason Letts(author of 'The Inevitable Trilogy')
★★★★★ "Highly readable and thoroughly enjoyable" -J.B. DiNizo (author of Comingsand Goings)
★★★★★ "High Seas and Exotic Ports" -Gary Jordan (author of 'Leon's Lair')

Lance & James Morcan are a father-and-son writing team based Down Under. Lance is a novelist/screenwriter/film producer living in New Zealand, while James is an actor/novelist/screenwriter/producer based in Sydney, Australia. They have co-authored five published novels which include the international thriller series THE ORPHAN TRILOGY (The Ninth Orphan / The Orphan Factory / The Orphan Uprising) and the historical adventure series THE WORLD DUOLOGY (World Odyssey / Fiji: A Novel). The Morcans' first non-fiction title, THE ORPHAN CONSPIRACIES, was published recently. Their production company, Morcan Motion Pictures, is developing The Ninth Orphan and Fiji into feature films.

4.2 out of 5 stars
4.2 out of 5
45 customer ratings
How does Amazon calculate star ratings?
Amazon calculates a product’s star ratings based on a machine learned model instead of a raw data average. The model takes into account factors including the age of a rating, whether the ratings are from verified purchasers, and factors that establish reviewer trustworthiness.
Top Reviews

P. Blevins
TOP 1000 REVIEWER
5.0 out of 5 stars Great summer read
Reviewed in the United States on July 2, 2014
Verified Purchase
World Osyssey: Book One in the World Duology is by Lance and James Morcan. This novel takes one from Philadelphia, Pennsylvania to the Northwest territory of Oregon; from Kensington in London, England to New Zealand; and from London, England to the penal colony in Australia to New Zealand. Three characters, Nathan Johnson, Susannah Drake, and Jack Halliday, leave their homes to make a new home in the Fiji Islands. Little do they know that their paths will cross in that new land.
Nathan Johnson is the son of a sea captain. His father was a brutal and seemingly uncaring man who continually harassed Nathan to shape up and meet his standards. Nathan never could and ended up running away from home. His first job on a ship was for his uncle (his mother’s brother) who traded along the west coast of the United States. Nathan’s first voyage was to be very unlucky as he was the only survivor of his ship which went down in a storm. Nathan was taken into the Makah tribe first as a slave and then as a son to the chief. Over the years, Nathan only wanted one thing, to escape. When the time came, he managed to escape and then continue his adventures which would take him to the Fuji Islands.
Susannah Drake is the daughter of a minister who is called to be a missionary in Fuji. She cajoles her father into taking her with him. Reluctantly, he agrees. The ocean voyage is very taxing. Boredom, seasickness, death, pirates, wounded father, all combine to make her voyage exciting. What will she find when they reach their destination?
Jack Halliday is forced to go to work early to help his family survive in London. Jack works for a blacksmith and works long and hard hours. He is owed some overtime but the owner refuses to pay him. Jack breaks into the offices one night and takes some hemp for his back pay. He is caught and sentenced to years in the penal colony in Australia. He escapes and ends up in New Zealand. He has a native wife and four children and is a trader. What will he find when he goes into the inland in search of plantation owners to buy the rights to cutting trees? What will happen when he, Nathan, and Susannah meet?
It will be interesting to read the sequel Fiji: A Novel (The World Duology #2.

Howard Lipman
5.0 out of 5 stars An exciting intriguing novel of 19th century adventure
Reviewed in the United States on October 8, 2014
Verified Purchase
This is a stirring exciting novel about three people from different places and social standing whose lives eventually become entangled on the Fugi Islands. I was intrigued by the deft plotting of the writers--sketching the lives of the three, Nathan, Susanna, and Jack as they go through life's trials and tribulations over three decades. Their lives are filled with brutal and pious fathers, pirates, indians, shipwrecks, battles, cutlasses, muskets and tomahawks. Their adventures take them from Philadelphia, Pa. to the Northwest Territory of Oregon, and from London, England to New Zealand among other places mentioned.The descriptive writing--the scenery, the sights, sounds and smells are rendered realistically and the characters are three dimensional. I felt as if I knew them. They eventually end up on the Fugi Islands. I look forward to reading the next book in the series. This one was a real page-turner. (Review by Howard Lipman--pen name PanOrpheus, author of the 'Tesla's Tower' and 'Delphic Oracle' book series)
Read more
3 people found this helpful
Helpful
Comment Report abuse

Dave Lyons
5.0 out of 5 stars Exciting Adventures Await!
Reviewed in the United States on August 2, 2018
Verified Purchase
Really enjoyed this book and am looking forward to reading the 2nd book - Fiji. It just so happens that my wife and I got married in Suva and honeymooned in Fiji on a coconut plantation 30+ years ago. This book was filled with excitement, romance, adventure, sailing vessels, and so much more, so know that the 2nd book will pick up and provide more of the same!
Read more
One person found this helpful
Helpful
Comment Report abuse

phyllis whitmyer butterfly2lady@hotmail.c
3.0 out of 5 stars Easy to read
Reviewed in the United States on November 8, 2016
Verified Purchase
This is the 1st book in the series.. 2nd is Fiji... same feeling in reviewing.. Easy to read, rather enjoyable but too much "love drama" and happily ever after.
Read more
2 people found this helpful
Helpful
Comment Report abuse

liz drewery
5.0 out of 5 stars Discovery
Reviewed in the United States on July 6, 2018
Verified Purchase
An entailing an descriptive book hard to put down absolutely on of my best reads
Read more
One person found this helpful
Helpful
Comment Report abuse

Todd Simpson
5.0 out of 5 stars Fantastic Read
Reviewed in Australia on November 6, 2016
Verified Purchase
This is a fabulous story that had me hooked from the beginning. Lance & James Morcan certainly know how to write a story that not only has a great plot, but also has a very diverse and interesting range of characters. I really enjoyed the way this book is written, moving around each characters story and background. It’s almost like reading three wonderful stories in one. Nathan Johnson couldn’t get away from his violent father fast enough. Being sent to boarding school at the age of 12 was a blessing, even though he didn’t stick around. Nathan left school and became a sailor, and he was lucky enough that his uncle was a Captain of a ship, and he was also a good and fair man. Life was quite good for him on board the Intrepid until they upset a tribe of Indians in North America. The crew only just managed to escape before being overrun and killed, and then to top it off they sailed into the storm from hell. The ship was ripped to pieces and somehow Nathan survived, to only end up back with the Indians as their slave. He would need to bide his time until he found the opportunity to escape. Jack Halliday getting kicked out of home at the age of 16 was quite tough, especially not having a job or any money to buy food. So landing a job as an apprentice blacksmith was a piece of luck, it’s just unfortunate that he had a terrible boss. Jack was owed pay for overtime, and since his boss Mr Sullivan wasn’t paying up, Jack decided to break into work after hours to steal something he could sell. Unluckily for him Sullivan just happened to come back and caught him in the act. So before Jack knew what had hit him, he was on his way to Australia for a seven year sentence in the Parramatta Penal Colony. Initially life wasn’t too bad as a convict in the “bottom of the world”, as they were paid a small amount and then had a little bit of freedom around the settlement after work until lights out. Unfortunately Jack thought it would be a good idea to escape, and he was doing alright until he was caught. However he wasn’t going to be deterred and he would certainly be trying again. Susannah Drake was devastated as she watched her mother slowly fade away from an unknown illness. The Doctors couldn’t work out what was wrong with her before she passed away. Her father agrees to let her join him in moving to Fiji for his mission, and it’s going to be a hell of a journey in getting there. This is my third book that I’ve read from these Authors, and I’ve thoroughly enjoyed each one of them. Easily worth the 5 star rating.
Read more
One person found this helpful
Helpful
Sending feedback...
Thank you for your feedback.
Sorry, we failed to record your vote. Please try again
Report abuse

W. G. Hall
2.0 out of 5 stars Two Stars
Reviewed in the United Kingdom on July 1, 2014
Verified Purchase
did not like
Read more
Helpful
Sending feedback...
Thank you for your feedback.
Sorry, we failed to record your vote. Please try again
Report abuse