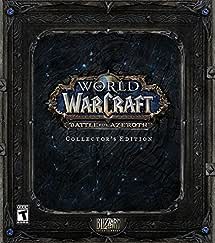 Battle for Azeroth — Embers of War

Lines have been drawn between the Horde and Alliance, loyalties tested, and the war between the factions has begun in earnest. The race is on to recruit new allies and gather a new powerful resource – Azerite. Will you heed the call of battle?

In war, nothing is certain. In just one moment, a single action can determine victory or defeat. For Sylvanas Windrunner, warchief of the Horde, war has led her to many such moments—including one that will change the course of history on Azeroth.

Every great war story has two sides. This limited edition hardback version collects two new World of Warcraft novellas depicting the Burning of Teldrassil from the point of view of the Alliance (Elegy, by Christie Golden) and the Horde (A Good War, by Robert Brooks). Each story includes original artwork exclusive to this edition*.

Declare your allegiance with this hefty, double-sided Mark of Allegiance. Place it somewhere prominent, with your chosen faction proudly facing out into the world for all to see. Includes stand.

A digital key to download the stirring orchestral pieces from the Battle for Azeroth soundtrack, the perfect mood music for laying siege to your enemies.

Digital key to unlock the full version of Battle for Azeroth.

Unlock a treasure trove of Horde- and Alliance-themed in-game content within World of Warcraft and across other Blizzard games:

HEROES OF THE STORM

Upgrading from Standard or Digital Deluxe to Collector’s Edition

Please note, if you bought a standard edition then upgraded to a digital deluxe, you will be credited for the original copy only.

If you bought the Standard OR Digital Deluxe copy of Battle for Azeroth and pre-ordered the Collector’s Edition, your Blizzard Balance credit will be the price you paid for the original copy.

If you bought the Standard digital copy, upgraded to Digital Deluxe at a later date, then pre-ordered the Collector’s Edition of Battle for Azeroth, your Blizzard Balance credit will be the price you paid for the original Standard Edition.

4.6 out of 5 stars
4.6 out of 5
187 global ratings
How are ratings calculated?
To calculate the overall star rating and percentage breakdown by star, we don’t use a simple average. Instead, our system considers things like how recent a review is and if the reviewer bought the item on Amazon. It also analyzes reviews to verify trustworthiness.

Brittany Henn
3.0 out of 5 stars Weakest CE for WoW to date...
Reviewed in the United States on August 19, 2018
Platform: PCEdition: Collector'sVerified Purchase
Yes I know... you've been hearing how horrible this CE is and honestly... its not very good at all. I've been collecting every CE since Burning Crusade (sadly missing out on the Classic WoW CE). When this was all announced back in April we knew we weren't getting much. I am a completionist so I bought this mainly to go next to my other WoW Collector Editions on the shelf. I think most other reviewers have said what needs to be said... the coin is very nice but not worth the extra 30 bucks...no physical soundtrack....no artbook... etc etc. I think the item I am most disappointed in not receiving is the art book. I feel this novella won't have the type of re-read value as an artbook would. I am an art major so I always have enjoyed art books and seeing the thought process that goes into the development of the movies and games I love. I think Blizzard really could've made the negative feedback much better in just keeping what collectors and gamers love in their CEs... the removal of the artbook was, in my opinion, the biggest flaw in this box. I even miss my silly tradition of switching the mousepad out for the new expac version. It really does feel like Blizzard didn't try here... and if they really aren't making much money off the CE boxes maybe increase the price? Or heck, don't offer it at all if its that much of a bother! After seeing the love Blizzard put into the Overwatch Collectors Edition.... this is a blow to Warcraft fans... Don't try telling the fans what they want...as you can see it wasn't the most popular change!

I gave this 3 stars because the game itself is 69.99 with the digital content and it's been very enjoyable so far for me =) For those who don't like Collectors editions or don't NEED it... don't bother here. Go digital and save 30-40 bucks on it. What you get here is not worth the extra funds. Spend that extra and buy an in game mount or something!

I also wanted to throw out that I had pre ordered this back when it was announced and listed on Amazon. I received it almost a week after the game launched. ( 8/19/19 ) What is the point of pre ordering a game if you get it that late? I have gotten my Collector Editions since Pandaria through amazon with no issues for release day delivery....so not sure what happened this go around.....So between Amazon and Blizzard I'm disappointed in how this whole thing was handled. I had to buy the digital version to get playing with my friends... and not waiting a week after launch (had already paid of the pre order here with amazon gift cards) Luckily Blizzard will give me Blizzard Store Funds... but that isn't how I wanted to spend an extra 70 bucks =)

grx
3.0 out of 5 stars Collector Edition Doesn't Offer Much to Collect
Reviewed in the United States on August 29, 2018
Platform: PCEdition: Collector'sVerified Purchase
This review is for the Physical Collector Edition, not the digital CE

Pros:
> If you purchased the standard digital edition to do the pre-patch content, you get Blizzard credits to spend in your Blizz.net account (on game-time/digital content for any of the games they offer)
> Still get soundtrack - albeit a digital code to get a download
> Still comes in the ridiculously large collector box (if you are collecting those)
> Stories in the book are decent - at least worth a one-time read
> You get a trinket to put on your desk, showing off your Horde or (ahem) Alliance support

Cons
> Gone are the Mousepad, Cinematics/Behind-the-Scenes DVD, and physical CD soundtrack
> No concept art book
> The story book was poorly made - there were ink smudges and blue stains on a handful of pages. The paper was thinner stock too.
> Amazon delivered 2 days after launch. I put in my order back in April, so I should have given them sufficient lead time to get these in stock and ready to ship. My Legion CE was also a few days late. I'm guessing this is less about Amazon being able to handle a shipment and more about Blizz delivering promised quantity on time...

Overall
> I felt like Blizz could have offered the digital soundtrack in with the digital version of the Collector edition. The download code worked fine, but I still would have preferred a physical copy - as in something I might be collecting...
> The desk trinket is a cool idea. It is well made and looks sturdy.
> The extra cost didn't feel like it got me $20+ more than what I got on the digital collector version. Throw in the soundtrack code next year with the digital CE, and I'll forgo the physical CE.

I'm okay with venturing out and trying some new collector options, but I felt like these were just too "meh" for me.
3-star rating reflects the loss of expected collector items and late delivery (shame on you Blizz for 2x in a row).

Cucumber morty
5.0 out of 5 stars Good shape
Reviewed in Canada on December 14, 2018
Platform: PCEdition: Collector'sVerified Purchase
Great product , I was very happy with the condition the product was in when it arrived
Read more
Report abuse

Amazon Customer
5.0 out of 5 stars Quick delivery
Reviewed in Canada on May 8, 2020
Platform: PCEdition: Collector'sVerified Purchase
Arrived quickly and was as described. Husband is happy with his gift.
Read more
Report abuse
See all reviews

Page 1 of 1 Start overPage 1 of 1
This shopping feature will continue to load items when the Enter key is pressed. In order to navigate out of this carousel please use your heading shortcut key to navigate to the next or previous heading.
Back
Next
Pages with related products. See and discover other items: Trinkets Movies