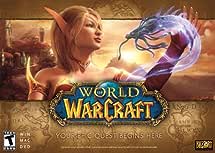 You Were Meant for this World

4.2 out of 5 stars
4.2 out of 5
197 global ratings
How are ratings calculated?
To calculate the overall star rating and percentage breakdown by star, we don’t use a simple average. Instead, our system considers things like how recent a review is and if the reviewer bought the item on Amazon. It also analyzes reviews to verify trustworthiness.
Top reviews

Mishari Drissi
5.0 out of 5 stars W.O.W certainly wowed me
Reviewed in the United States on October 13, 2014
Platform: PC/MacEdition: Standard GameVerified Purchase
My friends started playing WOW when it was in it's early vanilla stages, spending tonnes of money on the expansions. I had always been intrigued by the thought of playing world of warcraft but felt I would probably not get a fully immersive experince if i didn't purchase the expansions. This battle chest however, contained the original WOW, Burning Crusade (expansion), Wrath of the Lich King (expansion) and Cataclysm (expansion). With the exception of Mists of Pandaria (expansion) and upcoming Warlords of Draenor (expansion) I managed to get all those games which at their release were worth a total of roughly $200 for like $12. It also came with one full month of WOW subscribtion (needed to play the game) (another $15 value) absolutely free. It really is a great buy if you just wanna try it out but also experience most of the expansions also.
Read more
9 people found this helpful
Helpful
Comment Report abuse

Thanks for Playing
1.0 out of 5 stars Not Amazon vendors fault, they get 4 stars. Blizzard is run by china, get's 1 star, zero if i could.
Reviewed in the United States on January 1, 2020
Platform: PC/MacEdition: Standard GameVerified Purchase
Wish I had never bought this. Blizzard is run by China. I did get what I paid for. Had I known Blizzard was run by the chinese government I never would have bought it.

And Amazon, you better post this. People need to make informed choices as to where their personal information regarding this game get's sent.

Mert
5.0 out of 5 stars Flawless Activation (and game-time)
Reviewed in the United States on August 27, 2019
Platform: PC/MacEdition: Standard GameVerified Purchase
I won't be reviewing WoW here, especially as I bought this to access Classic, but besides that, everything went without issues. I opened the package, saw a WoW box, opened it, saw a thick booklet and some discs.

The Disc 1 had an activation code on it, which is the whole reason I bought this. I went on the Blizzard Client, redeemed the code, and owned WoW up to the Legion Expansion.

Since I have never played WoW before, it also gave me 30 days of game time, which I was hoping for. And now I am able to play Classic.

Elmo
5.0 out of 5 stars I can play the game now
Reviewed in the United States on August 4, 2019
Platform: PC/MacEdition: Standard GameVerified Purchase
Played the starter pack before, but after level 20 I couldn't play anymore, so I bought this game, and now I can play the game for 30 days. no idea if I want to get gametime after 30 days, but I just wanted to experience the full game, and I did.
Read more
Helpful
Comment Report abuse

Renee Lynn
4.0 out of 5 stars For the Horde!
Reviewed in the United States on April 12, 2016
Platform: PC/MacEdition: Standard GameVerified Purchase
If i'm basing my review solely on the amount of fun I have with WoW, I would give it 5 stars. There's so much you can do within the game. I've only been playing for about a month, but there's a ton that I haven't even tried yet. Heck, I have friends that have been playing for years, who haven't tried everything. It's well thought out and provides countless (mind-numbing) hours of fun. So much so, that one hour quickly turns into 7. You don't realize just how much time you're spending on the game, until you happen to glance at the clock and see that it's 3am. Needles to say, i've been exhausted on several occasions, after many hours of game play.

My only complaint is that I occasionally find glitches within the game. For instance, i'll have a quest that tells me to speak to certain non-player characters, but when I click on them, nothing happens. It doesn't trigger the response that it should. This doesn't happen often but it has happened on three different occasions. After doing an internet search, I found forum posts from MANY years ago, about these very glitches. These are known issues that Blizzard was made aware of, but never fully corrected. That sucks.

Aside from that, I have no complaints - especially at this price point. You get every expansion made, except Draenor, and Legion (which isn't due out until September 2016). This one purchase will allow you to get to level 90. If you purchase Draenor (sold separately), you'll be able to reach level 100, AND get a FREE booster. Basically, you can automatically boost one of your characters to level 90, even if you JUST created it. If you pre-order Legion, you'll be able to level up to 110, once it comes out. For now though, all you need is this first pack.

There's one important thing to note about World of Warcraft. Even if you have all of the expansions, there are still additional costs. Many are optional but one is not, and that's the monthly subscription costs. So, in addition to your purchase of the expansion packs, you also pay a fee for game time. This varies, depending on whether you pay month to month, or prepay for several months in advance.

The biggest recommendation I can give, is for you to read the enclosed beginners guide. My friends all laughed at me for reading it (they've been playing for years so they know this stuff inside and out), but it was super helpful. It explained things that I wasn't quite grasping and has made my game play that much more enjoyable.
Read more
7 people found this helpful
Helpful
Comment Report abuse

Garry
5.0 out of 5 stars Disc's are useless; The 30-day code is still good for new and starter accounts
Reviewed in the United States on June 6, 2019
Platform: PC/MacEdition: Standard GameVerified Purchase
Comes with a nice manual and the 30 day game time code works ONLY with new or starter accounts (can't be use on existing full accounts). I recommend this if you want the manual and a nice box along with your first month of game time - I really enjoy this game after trying the free starter edition and would suggest people check that out before buying this box set but then buy this box set before subscribing to it monthly.
Read more
Helpful
Comment Report abuse

Greg
4.0 out of 5 stars Solid Box Set for Getting Started
Reviewed in the United States on March 31, 2014
Platform: PC/MacEdition: Standard GameVerified Purchase
As far as what comes in the box, this is a very affordable way to get started with WoW. The base game and Cataclysm expansion are included, along with a free month of game time. Since you are paying equivalent to what a month costs for all the software you'll need in that time frame, it's not a bad experiment if you've not tried WoW, or are coming back for the first time since before Cataclysm.

The game is very streamlined. It's a great way to lose several hours of your life at a time. The progression to new equipment and new skills can be satisfying. For me, the simplification of the game has taken a lot of the reward from it. There's very little sense of exploration until you get out of starter zones (to keep you from dying), and from there it can be fun to team up with a friend and run around the countryside. If you're into raiding and top tier loot, you'll also need to invest in the Mists of Pandaria expansion.

For me, the monthly fee is a little much for something that from time to time feels more like work than play. The game mechanics are not interesting enough, and while the story is an interesting diversion, if you try reading journal entries while questing with others, you'll get left behind.
Read more
3 people found this helpful
Helpful
Comment Report abuse
See all reviews

rajakhouri
5.0 out of 5 stars Awesome wow pack :)
Reviewed in India on September 7, 2015
Platform: PC/MacEdition: Standard GameVerified Purchase
This game comes with all expansion except WOD which you will have to download after installing the game from 4 disc using the offline function in battle.net all you need to do is download additional 10gb of patch which is of course WOD then patch 6.0.3 which is all upto you to download or not and then you can redeem the code which comes in with the game disc 1 and play for 1 month :)
Read more
4 people found this helpful
Report abuse

Joshua
5.0 out of 5 stars Great value for a classic game
Reviewed in Canada on March 3, 2017
Platform: PC/MacEdition: Standard GameVerified Purchase
Bought this product extemely cheap. Same world of warcraft i used to play back in the day. Overall good game.
Read more
One person found this helpful
Report abuse

Kaitlyn
5.0 out of 5 stars Wow!
Reviewed in Canada on February 26, 2019
Platform: PC/MacEdition: Standard GameVerified Purchase
Not what I thought... even better
Read more
Report abuse

Lord Dianysius Aurilius
2.0 out of 5 stars Never able to play
Reviewed in Canada on December 24, 2017
Platform: PC/MacEdition: Standard GameVerified Purchase
I could never get in to the game because my video card was not fast enough.
Read more
Report abuse
See all reviews

Page 1 of 1 Start overPage 1 of 1
This shopping feature will continue to load items when the Enter key is pressed. In order to navigate out of this carousel please use your heading shortcut key to navigate to the next or previous heading.
Back
Next
Pages with related products. See and discover other items: warcraft 2, hello world, apple software