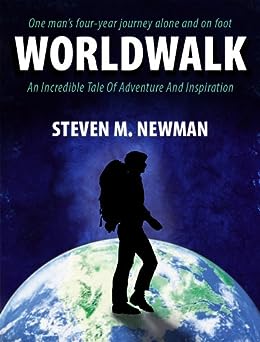 by Steven Newman (Author) Format: Kindle Edition
See all formats and editions
Sorry, there was a problem loading this page. Try again.
At age 28, freelance journalist and former roustabout Steven Newman set out from his home in Bethel, Ohio, to backpack alone the back roads and pathways of the world–unsponsored, unpublicized, paying his own way, and writing for a newspaper audience of nearly 1.5 million. Four years later, he had successfully walked the length or width of 21 countries on five continents and fulfilled a childhood dream. Nearly everywhere on the five continents he crossed, he found familes that invited this American stranger into their homes (sometimes for weeks), and new friends that put him in touch with their friends. In addition to lives of the everyday people that he wrote about in his bi-weekly newspaper dispatches, he had dozens of adventures straight out of a novel or a movie. Among those adventures were wars, a struggle with a blizzard in the Spanish Pyrenees, wild boars that treed him for an entire night in Algeria, bandits in Thailand that nearly chopped off his head, a circus in Greece he worked in for two weeks, a smalltown newspaper in Australia he ran for two months, a flash flood in Australia, and arrests and interrogations in Algeria, Yugoslavia and Turkey. Through it all, Newman proved himself willing to learn from other cultures and to become quickly adaptable to strange cultures and unforgiving natural settings such as jungles and deserts and even fires the size of American states. As the Oregonian newspaper succinctly put it: “Newman, irrepressible, indomitable, indefatigable…always fascinating, records his experience with poetrical eloquence.”
Read more
Previous page
Next page

At age 28, Newman, a journalist and onetime oilfield worker, set out from his home in Bethel, Ohio, to walk the world--unsponsored, paying his own way. Four years later, he had visited 20 countries and fulfilled a dream. Nearly everywhere, he found substitute Moms (much of his story veers toward the saccharine), and new friends put him in touch with their friends. He ran into a blizzard in the Pyrenees, wild boars in Algeria and narrowly escaped a flash flood in Australia. There were three life-threatening episodes, and he was arrested in Algeria, Yugoslavia and Turkey. Newman proved himself willing to learn from other cultures, was adaptable and appreciative of hospitality. Sentimentality aside, this is a brave tale of adventure. Photos not seen by PW. Literary Guild dual main selection.
Copyright 1989 Reed Business Information, Inc. --This text refers to an out of print or unavailable edition of this title.

At age nine, Newman dreamed of walking around the world. Nineteen years later, in 1983, the journalist set out from his Ohio home, traversing 20 countries and hiking about 10,000 miles in four years. Newman chronicles his journey, which he undertook to prove that there are hospitable, good people around the world and that our planet is not doomed. He finds plenty of good people, but the most exciting reading involves his arrests in Turkey, Algeria, and Yugoslavia, and his run-ins with sundry officials, etc. It is also great fun to watch Newman, who had never ventured out of the United States, mature and become more acclimated to foreign cultures. The travel feat is incredible, but the book is not as enthralling as one might expect, possibly because the scope and length does not allow much insight into each culture and country.
- Melinda Stivers Leach, Precision Editorial Svces., Wondervu, Col.
Copyright 1989 Reed Business Information, Inc. --This text refers to an out of print or unavailable edition of this title.

jreeves
5.0 out of 5 stars It's an oldie but a goodie
Reviewed in the United States 🇺🇸 on July 26, 2020
Verified Purchase
I really enjoyed this book! More than I thought I would (it's a little lengthy but didn't seem like it). The author keeps it real. His journey was made all the more difficult considering no cell phone and no GPS. The walk takes place from 1983 - 1987 and the book was written in 1989. I like the fact that it was an older book. It was interesting to hear what was happening in the world back then and I correlated it to my age at that time. It was a very real look into our world and our societies. And how things have changed (or not).
Read more
2 people found this helpful
Helpful
Report abuse

lief fastring
5.0 out of 5 stars Amazing
Reviewed in the United States 🇺🇸 on December 5, 2020
Verified Purchase
It was awe-inspiring to learn about the world and different cultures through someone who experienced it firsthand. An intellectual yet entertaining read, I learned not only the diversity of so many cultures around the world, but the one thing they all have in common... love.
Read more
Helpful
Report abuse

Jazzie
5.0 out of 5 stars Coming of Age
Reviewed in the United States 🇺🇸 on May 1, 2015
Verified Purchase
Steven's account of his worldwalk is really a "coming of age" saga of a young man who comes to know himself as most people never experience. He learned to know himself through other people of the world, firsthand, not through media sources. His periods of time alone, away from others, gave him the opportunity to know himself introspectively. He was able to tell his story in a very compelling style, because of his journalistic background. This is an excellent first-hand account.
Read more
One person found this helpful
Helpful
Report abuse

Amazon Customer
5.0 out of 5 stars Traveling the world through words
Reviewed in the United States 🇺🇸 on February 21, 2018
Verified Purchase
What a wonderful experience traveling the world with Steven Newman. I loved each new country, new experience and all the people he met. Well written with great explanation about unique customs and lifestyles throughout our beautiful world. I absolutely loved it !!
Read more
One person found this helpful
Helpful
Report abuse

Christopher C. Phillips
5.0 out of 5 stars Amazing story
Reviewed in the United States 🇺🇸 on November 10, 2018
Verified Purchase
This book was recommended to me by my cousin, Heather. It is an absolutely amazing story. It will warm your heart. Please read this uplifting book when you have the opportunity.
Read more
One person found this helpful
Helpful
Report abuse

Paul
5.0 out of 5 stars What a spellbinding lesson of hope!!
Reviewed in the United States 🇺🇸 on January 30, 2014
Verified Purchase
This is a book that I'd like to see on every school's summer reading list. It gives a first hand description of what this life is all about: relationship with each other, ourselves, our environment, and without being at all preachy, a very real God. Mr. Newman takes us with him on his bone chilling, hair raising, heartwarming, and soul calming adventure. It is without question a lesson of hope and love taught in an exciting and gripping way.
Read more
2 people found this helpful
Helpful
Report abuse

I. Behling
5.0 out of 5 stars Awesome Trip
Reviewed in the United States 🇺🇸 on November 10, 2016
Verified Purchase
If you like new heartwarming experiences of different cultures you will love this book. It was easy to get so caught up in the authors magical, sometimes harrowing experiences. It taught me a core truth about our humanity and trusting strangers. Well written. I definitely recommend this book.
Read more
One person found this helpful
Helpful
Report abuse

Kathryn Tibbs
5.0 out of 5 stars Amazing journey
Reviewed in the United States 🇺🇸 on November 29, 2017
Verified Purchase
Good book, I really enjoyed the adventure. I wish I had read this when it was first published. Wonder how the journey would go today
Read more
One person found this helpful
Helpful
Report abuse
See all reviews