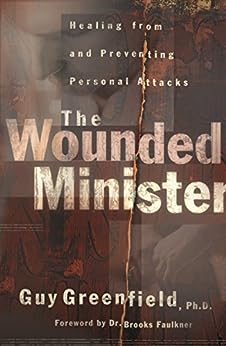 Are you a hurting pastor seeking healing? Are you a lay leader wanting to protect your pastor? Here is a compassionate, proactive look at pastoral abuse, a tragic reality that you can do something about.

Every church deals with personality conflicts and intermittent discord. But in some congregations, there are people who intentionally attack leaders and initiate a devastating form of abuse-pastoral abuse. A growing phenomenon that cuts across denominational lines and impacts every level of ministry, pastoral abuse leaves in its wake wounded people with ruined ministries, broken relationships, damaged health, even shattered faith.

The Wounded Minister examines the reality of evil in churches and the ways in which "clergy killers" or "pathological antagonists" emotionally and spiritually batter pastors. A deft mix of personal experience and in-depth research, this resource will help wounded people of all ministerial positions learn how to recover their broken hearts while rebuilding their lives. As preventive medicine, it also provides guidelines on how sensitive Christians can develop a church structure that protects their pastors from this tragedy. --This text refers to an out of print or unavailable edition of this title.

Guy Greenfield is a former pastor and seminary professor who now performs counseling services through Panhandle Pastoral Counseling Ministry, which he founded. He is a member of the American Association of Pastoral Counselors and the American Association of Christian Counselors. Greenfield is also the author of several books, including The Wounded Parent and Reigniting Love and Passion. He lives in Amarillo, Texas. --This text refers to an out of print or unavailable edition of this title.

4.5 out of 5 stars
4.5 out of 5
37 global ratings
How are ratings calculated?
To calculate the overall star rating and percentage breakdown by star, we don’t use a simple average. Instead, our system considers things like how recent a review is and if the reviewer bought the item on Amazon. It also analyzes reviews to verify trustworthiness.
Top reviews

Andy
5.0 out of 5 stars Finally! Somebody who understands!
Reviewed in the United States on July 30, 2013
Verified Purchase
One of the things I liked most about this book when reading it is that the author's experiences were very similar to mine! When going through the pain of being forced out of what everybody originally recognized as God's call for you, it's often easy to talk with somebody who will listen, but most can't relate. That's what really caught my attention when I began reading this: Finally! Somebody who understands and KNOWS what I'm talking about because HE TOO has experienced it!
Understand though, it's not a book filled with whining and complaining, but of relating and learning to heal.
If you've been bullied, pushed out of position, mistreated by lay leaders, committees, other Pastors, or certain members, regardless of where you are in the healing process, you really should read this book. He also suggests a model to set into place to help prevent it from happening again, either to you or to other leaders.

Edward J. Vasicek
4.0 out of 5 stars Great Empathy and Comfort for Abused Pastors
Reviewed in the United States on March 9, 2006
Verified Purchase
This book is filled with information, but written as though the author were discussing matters with you personally. He shares many stories of abused ministers and majors on the most common pattern: pathological antagonists coupled with passive leaders or members who do not want to get involved.

The author recounts some of his own experiences, and discusses how families, marriages, and even the faith of ministers are affected when they are forced to resign to keep their sanity.

He provides lists of categories of unhealthy people, and makes a distincition between pathological antagonists and activists. He addresses the former (and these make up the worse culprits), but offers little help for the latter (most of my personal brushes were with activists).

Those who have suffered will find encouragement. They need to hear that, in most instances,it is not the minister -- but people with unhealthy mental attitudes -- who are usually to blame. This is especially the case in churches that have repeatedly fired their pastors. In many churches, messed up people have become key influneces.

The subtitle, "Healing from and Preventing Personal Attacks" is not really accurate per se. Although the book promotes a healing that comes from understanding, there is little about how to defend oneself from personal attacks (other than encouraging churches to include a "minister's advisory counsel" -- more bureaucracy and another place for troublemakers to dig in as far as I am concerned).

Sections on assertiveness, verbal self-defense, and how to defend oneself against false accusations would have been helpful but were missing. A section on what to ask church leaders when candidating might also have been helpful (although there was some helpful information about what to look for in a church -- and the importance of contacting previous pastors who served there).

The strength of this book is in its empathy, and it might be a good place to start for those who need emotional recovery. Pastors who are currently facing such antagonists will find some help here -- but not enough (in my opinion).

The author mentions that most schools do not train pastors in religious, "street fighting." It is that "street fighting" techinique that could have used more attention here. Pastors need to remember that Jesus was only passive during His crucifixion and trial -- the rest of the time, He fought back with fervor.

Pastors who have been hurt badly will appreciate this book. It will help initiate the healing process.

Dr. David R. Bess
5.0 out of 5 stars Comfort for Clergy Causalities
Reviewed in the United States on February 22, 2004
Verified Purchase
Greenfield here addresses clergy causalities and ministerial mistreatment by churches. His depth and breadth are more extensive than any author I have read previously. This work is divided into three sections: the reality of church abuse, ministers whose personalities and/or disorders bring pain upon themselves, and ways to recover and to heal.
For me as a pastor, the best portions of the book were the last two sections. Most ministers are aware of the horror stories of clergy being abused by their churches, but far less are aware of traits in their own lives that increase the probability of injury. Also, few ministers who are wounded are aware of the many ways that healing and recovery can occur.
This volume is a must-read for any pastor or associate pastor. If he hasn't experienced yet the heartache of ministry, I am convinced it is not matter of when it comes, but how intensely it comes. This book will help a minister in caring for himself and in supporting colleagues who have been wounded in their service.
Read more
15 people found this helpful
Helpful
Report abuse

Adam Embry
4.0 out of 5 stars Worth Reading for All Wounded Ministers
Reviewed in the United States on January 21, 2015
Verified Purchase
Helpful book for recovery. If you're a wounded minister then reading it will help you know you're not alone. It'll give you categories to process the events, actions, and people of your situation. The book will help you realize it's ok to ask for help in the aftermath. I would say that the concluding chapters on recovery were the most helpful. As a wounded staff pastor, the chapter on abusive senior ministers clarified events I went through. If you're a wounded minister, it's worth reading this book with your spouse. The Kindle edition is very affordable.
Read more
2 people found this helpful
Helpful
Report abuse

Paul Canady
3.0 out of 5 stars The Wounded Minister
Reviewed in the United States on February 10, 2014
Verified Purchase
I felt Greenfield's research was outstanding and although I'd like to think his key solution would work I'm not sure that a new candidate for a position could push for it or church leadership would go along with it. A even better solution would be church leaders that are godly and take responsibility for coming alongside the pastor. But, definitely some good information in this book.
Read more
One person found this helpful
Helpful
Report abuse

Tom
5.0 out of 5 stars A must for ministry
Reviewed in the United States on December 28, 2020
Verified Purchase
This was an easy read that is well written. I found this very helpful in understanding the demands that ministry may bring and was to define and deal with them.
Read more
Helpful
Report abuse
See all reviews

Muriel Eaton
4.0 out of 5 stars Not just for clergy
Reviewed in Canada on November 30, 2013
Verified Purchase
A good read for people in parish leadership as well. I have only started the book on advice from a friend so I cannot give a complete review, but so far, so good.
Read more
Report abuse
See all reviews