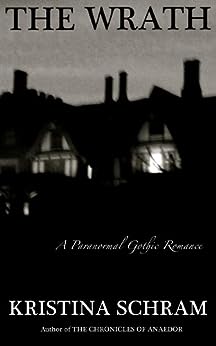 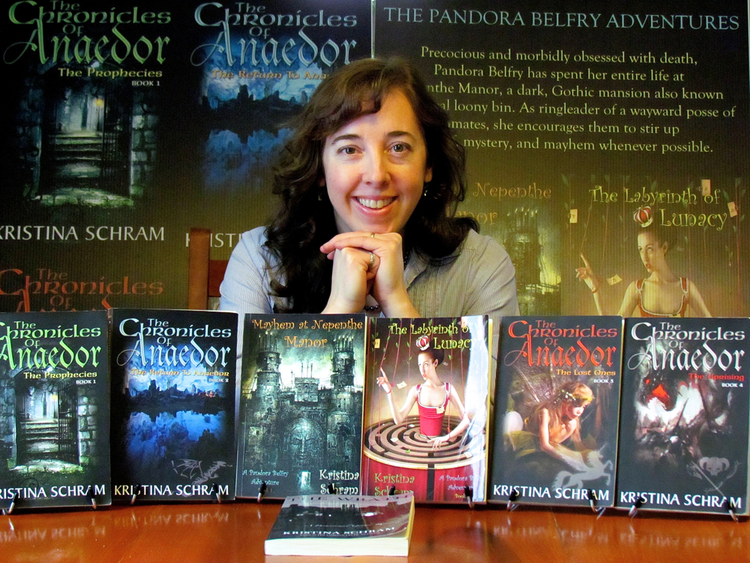 When author, Kristina Schram, was growing up she wanted to be a star. When that didn’t turn out quite like she expected, she turned her mind to achieving other goals: Earning her Ph.D. in Counseling Psychology, working as an Artist-in-Residence at local schools, being a free-lance editor and reader, coaching parks & rec basketball, and publishing her first novel, a YA fantasy called The Chronicles of Anaedor: The Prophecies (Book One). Knowing what it’s like to struggle with self-doubt and lack of confidence, her biggest dream (in addition to owning a castle) is to stamp out low self-esteem for everyone, especially young people. “Feeling bad about yourself is the number one deterrent to achieving happiness,” she says. “So for the sake of a better world, it’s got to go.” She lives in New Hampshire with her husband, three boys, her mother and various pets, and can also throw a tomahawk, if need be. For more information, visit her website: www.kristinaschram.com. She’s also on Facebook and Twitter. --This text refers to the paperback edition.

Alyne
5.0 out of 5 stars Gothic, eerie, paranormal...
Reviewed in the United States on June 13, 2014
Verified Purchase
I love a good haunted house story, so when I saw the spooky mansion on the cover of thsi one, it drew me in. I had to try it out.

The opening is classic Gothic Romance.

Evalina is a young American girl who comes from a family of actors who neglect and abuse her. They send her to stay with two eccentric aunts living in a remote mansion in the English countryside. In the opening scene, Evalina boards a train and soon finds her compartment invaded by a very attractive but disturbing young man who piques her curiosity. Hearing her name, he rudely rebuffs her, steeping on her oh-so-senstive toes.

Naturally, she cannot forget him.

From the train, Evie takes a coach. The coachman lets her off at a fork in the road, forcing her to choose which path to take in an attempt to find her aunts’ house. She passes through a dark forest in the rain, leaving her heavy suitcase in a bush, intending to to retrieve it later on. When she arrives at the door to the house with the suitcase mysteriously at her side, we know we are in the realm of the paranormal.

This mystery seems to be tied up with the Wrath and Evie’s ability to walk through it unscathed.
Read more
One person found this helpful
Helpful
Report abuse

Kindle Customer
4.0 out of 5 stars A good Gothic story.
Reviewed in the United States on June 18, 2020
Verified Purchase
I enjoyed reading this story. I liked Evie. I liked how she grew as a person . The atmosphere was good, and the suspense built slowly. I liked most if the characters . There is romance. I would like to see a sequel.
Read more
Helpful
Report abuse

Shirley Rivers
4.0 out of 5 stars Satisfyingly Horrific
Reviewed in the United States on May 16, 2014
Verified Purchase
I love reading paranormal fiction, especially when ghosts are involved. I especially like reading paranormal/gothic/ghost stories that provide elements I've not seen before, such as the "monster" in The Wrath. Well written, carefully copy edited and proofread. As a professional writer, editor, and proofreader, these are all essential to my enjoyment of a book. Nothing kills my interest faster than careless crafting. Author Schram is to be commended for an excellent job. I highly recommend The Wrath and look forward to reading more stories by Kristina Schram.
Read more
One person found this helpful
Helpful
Report abuse

Cricket
4.0 out of 5 stars Fun and fast book to read....
Reviewed in the United States on August 4, 2014
Verified Purchase
Very enjoyable book. I did not find this a "things that go bump in the night" scary kind of book and the author left out some things that should have been explained but all in all the book was a fast read and I would recommend it to friends.
Read more
Helpful
Report abuse

DB
5.0 out of 5 stars I am hoping for a sequel!
Reviewed in the United States on May 11, 2015
Verified Purchase
I truly loved this tale. Nay is very nice but for some reason I like the Wrath more. Gabriel is an enticing character I look forward to a sequel where he is redeemed and end up with Evie.
Read more
Helpful
Report abuse

Connie
4.0 out of 5 stars Recommend
Reviewed in the United States on September 23, 2014
Verified Purchase
This is a Grimm's brother-type fairy tale. You have an enchanted forest, wicked family members, not stepsisters this time, and magic. It is fun to read, but is the end really the end?
Read more
Helpful
Report abuse

v. palladino
5.0 out of 5 stars Very suspenseful reading
Reviewed in the United States on January 14, 2014
Verified Purchase
Very absorbing book, makes you want to keep turning those pages. From the beginning, it draws you right into its mysterious aura. Excellent characters, who are just as mysterious and intriguing!
Read more
Helpful
Report abuse

Mary N. Nelli
4.0 out of 5 stars Entertaining
Reviewed in the United States on May 27, 2014
Verified Purchase
Very entertaining, although somewhat predictable. Enjoyed both the villains and the heroes, and the story was engrossing for the most part.
Read more
Helpful
Report abuse
See all reviews
Back to top
Get to Know Us
Make Money with Us
Amazon Payment Products
Let Us Help You
EnglishChoose a language for shopping. United StatesChoose a country/region for shopping.
© 1996-2021, Amazon.com, Inc. or its affiliates