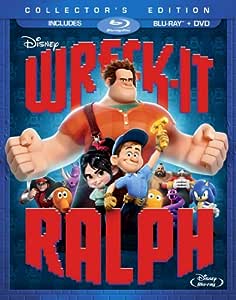 Save with Used - Good
$6.45
FREE Shipping on orders over $25.00 shipped by Amazon.
Arrives: Saturday, Jan 23
Ships from: Amazon
Sold by: Katie's stores

Wreck-It Ralph longs to be as beloved as his game's perfect Good Guy, Fix-It Felix. Problem is, nobody loves a Bad Guy. But they do love heroes... so when a modern, first-person shooter game arrives featuring tough-as-nails Sergeant Calhoun, Ralph sees it as his ticket to heroism and happiness. He sneaks into the game with a simple plan -- win a medal -- but soon wrecks everything, and accidentally unleashes a deadly enemy that threatens every game in the arcade.

Prepare for adventure when "the most original animated film in years" (Bryan Erdy, CBS-TV) that thrilled audiences of all ages drops on DVD and Blu-ray! From Walt Disney Animation Studios comes a hilarious, arcade game-hopping journey in Disney's WRECK-IT RALPH. For decades, Ralph has played the bad guy in his popular video game. In a bold move, he embarks on an action-packed adventure and sets out to prove to everyone that he is a true hero with a big heart. As he explores exciting new worlds, he teams up with some unlikely new friends including feisty misfit Vanellope von Schweetz. Then, when an evil army threatens their world, Ralph realizes he holds the fate of the entire arcade in his massive hands. Featuring an all-star voice cast and a groundbreaking animated short film, Disney's WRECK-IT RALPH has something for every player. Bring home the ultimate reward on Disney DVD and Blu-ray!

4.7 out of 5 stars
4.7 out of 5
11,453 global ratings
How are ratings calculated?
To calculate the overall star rating and percentage breakdown by star, we don’t use a simple average. Instead, our system considers things like how recent a review is and if the reviewer bought the item on Amazon. It also analyzes reviews to verify trustworthiness.

I'm in my 30s now. I have a kid and I grew up gaming in the NES, Genesis, and arcade machines. This film has a lot of novelty to it and a lot of allusions to things I grew up with which makes it both fun and familiar. I took my daughter to see it in theaters so when a digital copy came up I had to get it.

All in all its a film about being ok with being a bit different and that sometimes you gotta be the bad guy in a situation even though you're not a bad guy.

Well written, cute, and all in all a lot of fun if you're like me and can relate to the games and help bridge a bit of old with new.
Read more
27 people found this helpful
Helpful
Report abuse

GF
1.0 out of 5 stars DONT BUY THIS!!
Reviewed in the United States on February 27, 2019
Verified Purchase
Its a ITunes app movie only and iTunes sucks big time as you cant watch thru VUDU or MoviesAnywhere so I would stay away from this and only 1 any good is the 3D disc only!! This was a rippoff and I don't like iTunes at all and don't care for their sorry app and I never place anything on there unless it does goto VUDU or MoviesAnywhere and this 1 just goes to iCrap app!! Wish they would jerk that thing off the net completely along with all the iphones that cost so much that they actually toss another out behind a new 1 to get you to spend for an upgrade and there is a controversy over that now and they are in DEEP water over ipi**X and thnk they will be making refunds from all I have read up about those jerks!!
Read more
9 people found this helpful
Helpful
Report abuse

Mom2Two
5.0 out of 5 stars My kids love this movie
Reviewed in the United States on February 9, 2019
Verified Purchase
I was not expecting to enjoy this movie, but watched it because my 8 and 11 year old daughters wanted to try it. They loved it, and I have to say, it is a very cute movie. Worth watching as an adult, and highly recommended for anyone watching it with a child. We rented the movie at first, which was a mistake because we had to buy it. Since then, my daughters have watched it at least 6 more times, and my older daughter developed a trivia game of all Wreck-it Ralph questions that she plays with my younger daughter. It's a good story, with plot lines that have generated more than a few discussions of "why did..." and excellent character development.
Read more
7 people found this helpful
Helpful
Report abuse

Rose TylerTop Contributor: Action Figures
5.0 out of 5 stars When Can I see you Again?
Reviewed in the United States on May 27, 2016
Verified Purchase
This is one of the greatest movies Disney released recently. It's a wonderful story about a videogame bad guy (John C. Rielly) who wants more out of life, and tries to be the hero for once. In the process, however, he ends up accidentally releasing a force that threatens to destroy his world, and he must try to stop it. At the same time, the hero of his game (Jack McBrayer) tries to find him and bring him home before their game is unplugged. Along the way, Ralph meets the little candy-coated glitch with a snarky attitude but a sweet heart from the Candy-themed racing game Sugar Rush, Vanellope Von Shweetz, (Sarah Silverman) and the kick-butt commanding officer of the First Person Shooter Hero''s Duty Sergeant Calhoun (Jane Lynch). It has many great messages, including loving yourself and how wrong it is to bully and put people in boxes and judge them, and that friendship is more valuable than winning.

This has something for everybody. It has a great story, wonderful acting and BRILLIANT music by Henry Jackman. There's also lots and lots of wonderful details throughout this amazing videogame world they created, including tons of videogame character cameos and references all throughout the movie. It has action, adventure, surprising plot twists, a wonderfully believeable world, great characters, comedy, a nicely woven romantic subplot, and a wonderful friendship at the heart of the film. If you're a Disnerd, a videogame nut, animation nut, an adult or a child, You will love this.

Fair warning, though: The Cybugs in Hero's Duty may be a bit scary for very young children, and there is some rude humor and cartoony/videogame style violence and perilous scenes you'd expect from a world of videogames. But nothing too bad, though. There is definately alot for all audiences: kids, teenagers, and adults alike.
Read more
39 people found this helpful
Helpful
Report abuse

Ken
5.0 out of 5 stars This is a must-see movie!
Reviewed in the United States on July 23, 2013
Verified Purchase
I find in my old age I never actually go to a theater to see a film. I wait until it comes out on Blu-ray, and now that I have a 3D TV, I buy almost every film in 3D (even if 3D does bother my wife).

WRECK-IT RALPH is amazing, not just for the wonderful animation, but the story as well. It's a story of the "bad guy" in an old arcade game that is living on borrowed time. Ralph (John C. Reilly) goes to meetings of a sort of AA group for villains of arcade games, but he's determined to not be thought of as a bad guy. The other characters in his game, "Fix it Felix," don't want to associate with Ralph, and give him no credit for wrecking things so the game has a reason to exist so Felix (a really nice handiman) can fix-it. Felix gets a medal each time he saves the day, and Ralph feels he'll be accepted if he can get a medal. He sneaks into a commando game, and breaks all the rules to finally win a medal, but in the process releases a "bug" that he accidentally introduces into the sugary-sweet game of "Sugar Rush" Stuck in that game, and searching for his medal, he meets the Glitch, aka Vanellope von Schweetz (Sarah Silverman), an outcast who is adorable and irritating at the same time. She is determined to win an upcoming race, and Ralph sees her winning as the only way to get his medal back - until King Candy convinces him otherwise.

The rest of the film is brilliantly funny plot points and endearing moments as Felix and the Commando leader search for Ralph and the bug, and Ralph realizes that Vanellope is really meant to be the main character in Sugar Rush, and fights to make things right.

This film is amazing, and a wonderful work of animation from Walt Disney Feature Animation. It is to Disney's credit that, even after acquiring Pixar, they continue to also turn out wonderful animated films in their Animation division. See this film, unless you feel blood and guts is the only way to have an adventure.
Read more
15 people found this helpful
Helpful
Report abuse
See all reviews

Irve
3.0 out of 5 stars Blu-ray region free DVD region locked
Reviewed in the United Kingdom on April 28, 2014
Verified Purchase
It's a very strange decision to have a region free Blu-ray with a region locked DVD

Amazon Customer
5.0 out of 5 stars Absolutely love this DVD
Reviewed in the United Kingdom on August 29, 2016
Verified Purchase
Absolutely love this DVD! I am currently collecting all the Disney Villain limited edition DVD's, and this was a great start to my collection! The DVD case is amazing and all worth the price!
Read more
Report abuse

Mr. Rashid Akram
4.0 out of 5 stars Not bad
Reviewed in the United Kingdom on August 2, 2013
Verified Purchase
My nephew loves we have watched it 3 times already, the whole family have watched it together

Shame the game is not on the disk