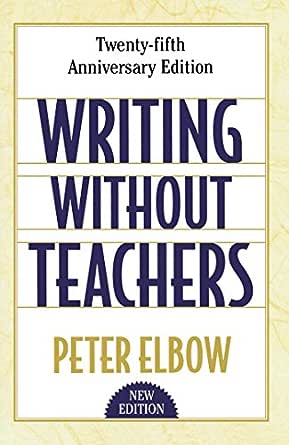 Flip to back Flip to front
Audible Sample Playing... Paused   You are listening to a sample of the Audible narration for this Kindle book.
Learn more
ISBN-13: 978-0195120165
ISBN-10: 0195120167
Why is ISBN important?
ISBN
This bar-code number lets you verify that you're getting exactly the right version or edition of a book. The 13-digit and 10-digit formats both work.


Praise for the previous edition:
"A wise and witty analysis of the process of self-confrontation and growth through writing."--Harvard Educational Review
--This text refers to the paperback edition.

If Peter Elbow's Writing Without Teachers seems to have come into being at the same time as '70s encounter groups, that's because it did. First published in 1976, Writing Without Teachers advocates improving your writing via freewriting and the "teacherless writing class." Freewriting, according to Elbow, is a terrific way to get things onto the page that you never knew you had in you: "Never stop ... to wonder what word or thought to use, or to think about what you are doing." Only after you have finished writing should you contemplate editing. And though much of what you produce when freewriting will be real garbage, Elbow promises that the best parts will be far better than anything you could have written otherwise. "You will use up more paper," he warns, "but chew up fewer pencils."

The teacherless writing class is Elbow's other key to unlocking the writer within. Elbow prefers these groups to those with teachers, because a teacher, he says, "usually isn't in a position where he can be genuinely affected by your words." In a teacherless group, the other participants "give you better evidence of what is unclear in your writing." Elbow insists that members of a writing group disregard conventional theories of "good" and "bad" writing, urging instead that they react to one another's work in a more subjective manner. The ultimate goal, he says, is for the group process to help each writer improve his or her ability to decide "which parts of [his or her] own writing to keep and which to throw away." --Jane Steinberg --This text refers to the paperback edition.


Peter Elbow is Professor of English and Director of the writing program at the University of Massachusetts, Amherst.
--This text refers to the paperback edition.
Read more