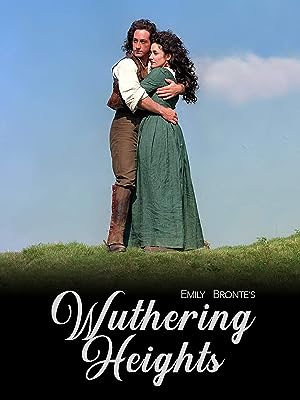 (208)
1 h 52 min1970NR
Mistreated foundling Heathcliff and his stepsister Catherine fall in love, but when she marries a wealthy man, he becomes obsessed with getting revenge, even well into the next generation.

Included with Shout! Factory TV on Amazon for $2.99/month after trial

Watch with Shout! Factory TV
Start your 7-day free trial
Add to
Watchlist
Redeem a gift card or promotion code
By ordering or viewing, you agree to our Terms. Sold by Amazon.com Services LLC.
Write review

KCReviewed in the United States on October 25, 2019
2.0 out of 5 stars
Oh is there a book?
Verified purchase
WUTHERING HEIGHTS is a very romantic book, right? Really, I don't think I've read a classic that's more romantic. Or more gothic?

It's not in the same class with the brilliant JANE EYRE by Charlotte Bronte. But there is an element to WUTHERING HEIGHTS that JANE EYRE lacks (NOT that there is anything lacking in Charlotte's masterpiece, it's just really a different genre.)

Heathcliffe's and Cathy's wild, crazy love hits me like no other book I've read. That's why I keep watching every incarnation of the book. And the film that captures that wildness the best is the one with Juliette Binoche and Ralph Fiennes. The scene in the kitchen with Catherine and Nelly is SO profound. My heart just breaks when Catherine says that it would degrade her to marry Heathcliffe. It's heartbreaking, and it takes your breath away. Janet McTeer is so great in that scene! As is Juliett Binoche!

I've seen every production of WUTHERING HEIGHTS. This one is okay, at best. The one released in 2003 is definitely the closest to the book, and the best. I LOVE it. If you like the book, watch the 2003 version.

Forest NymphReviewed in the United States on October 8, 2021
4.0 out of 5 stars
One of the Best Film Versions
Verified purchase
Though I'm not completely happy with any of them. Only the 2011 version really attempts to capture the racism and child abuse that Heathcliff endures in the novel, I feel that every other cinematic attempt has emphasized the romance too much, but the family saga and social critique too little. That one is flawed too, of course, since it strays so far from the book, is nearly silent, and entirely leaves out the dark humor.

The 1970 Wuthering Heights film is adequate, staying as true to the basic narrative of the book as just about any. It is also presented so well that it ages gracefully, it's sincerely difficult to tell if this version was made in 1970, 1980, or 1995, but that's the timeless class of the BBC for ya.

Victoria R.RemingtonReviewed in the United States on July 24, 2014
5.0 out of 5 stars
The best adaption and closest to the book
Verified purchase
I really enjoyed this version out of all of the other versions I have seen..even though I love them all,I felt that this one stayed the closest to the book,with all of the strong and brutal emotions,especially the scene where Cathy dies...was written by the screenwriters with so much intensity and then played out also with so much intensity...and really to the book it just blows your mind...other versions have come close like 1.1970 Anna Calder-Marshall,2.1992.Juliette Binoche...and while I love also all of the versions..it was a real let down...with the 2009 death scene..it was a really good movie..but just did'nt exactly follow the book and some "artistic licenses were taken by the screenwriters",..that I felt should not have been taken..like for instance the time...Cathy is supposed to be telling Nelly all about her love and her intentions to marry Edgar...{but why she is telling Heathcliff?]..and she does'nt run off after Heathcliff in the rain...and also the scene where Cathy dies was pretty much null and void...But with this 1998 version you get it all the way Emily Bronte wrote it
7 people found this helpful

AnnieReviewed in the United States on May 5, 2016
5.0 out of 5 stars
WUTHERING HEIGHTS (MASTERPIECE THEATRE)
Verified purchase
Wuthering Heights 1998 - what can I say? The main reason I bought this particular version (since there are more than one) is, of course, Matthew Macfadyen!!! Ever since I have seen Pride & Prejudice 2005 I am such a fan of his (before I saw the movie I didn't even know he existed). I have to say that I have not been disappointed, I love this movie and I love him. He is only 24 years old and does such a great job. Ever since I bought this DVD I must have watched it at least 10 times, sometimes just the good parts (like the ending - Hareton and Cathy kiss!!!). Having never read or seen Wuthering Heights before I must say I like it very much.
7 people found this helpful

Duenwen HsiaoReviewed in the United States on June 14, 2010
4.0 out of 5 stars
Mixed feelings
Verified purchase
I saw 2009 and this one back to back. WOW, how different... So this version. First of all, one has to keep in mind that this is a 2-hr movie, it's got to be edited unmercifully to fit into that time frame. I have mixed feelings about it. The emphasis here is completely taken off of Catherine and her relationship with Heatchliff. It's all about him and what happened after her death. I must admit I detested that whole part of the movie where Heathcliff and Catherine are running around the lands, giggling and frolicking and pretending to be in their 20s while all the time looking like the 40 year olds that they are. Actually I really got into the movie and was able to enjoy it only after Catherine died. Many commented on her bad acting - I disagree. She has a small part in the movie, acts 20 min or so in the entire movie and half of it she is supposed to pretend to be 20. I think she did the best she could with what she was given. Heathcliff did very well once he didnt have to act the teenager (which was a misarable failure, I guess it was not possible to make him look younger, no Benjamin Button budget), an interesting portrayal all in all. It was the second generation actors that made the movie come to life. Matthew McF. commands attention anytime he is on screen without even uttering a word. Him and the 2nd Catherine were delightful and authentic.

I give 4 stars as a stand-alone movie, loosely based on the novel. If I was forced to judge it as an adaptation solely and if one is looking for a faithful one - it's rather disappointing (about 2 stars).

(PS : 2009 I liked for exactly opposite parts - Catherine and Heathcliff were fabulous in the intensitiy and passion, though it was hard to find any gypsy in that actor, physically he's not what one would expect. The 2nd generation actors' part was blah).
6 people found this helpful

MBReviewed in the United States on June 28, 2020
1.0 out of 5 stars
Not impressed
Verified purchase
I love the book and I have seen many versions of it but the one that impressed me the most was the version of 1939 with Laurence Olivier. The depth of the main character, Heathcliff, has not been reached to it's fullest by anybody else but Olivier. I did not like this version at all but this is just my opinion.
One person found this helpful

GraceReviewed in the United States on August 18, 2005
5.0 out of 5 stars
Great adaptation of a novel that was way ahead of its time
Verified purchase
I find that this 1998 Masterpiece theater TV version follows the novel of the same name pretty faithfully. One who has never read the novel may find the action moving too quickly, so that the flow of the movie may seem slightly abrupt or choppy. However, the movie is only 2 hours long, which is probably why they had to cut out parts of the book and take some liberties with ages and certain details. That does not detract too much from the enjoyment of this movie, which despite its choppiness, has excellent acting, beautiful cinematography (the landscapes are breathtaking), and a wonderfully wrought out, bitter plot which focuses on three generations of two families who are intimately interlocked with each other. Heathcliff definitely comes off as the cruel, embittered man he is in the book, and it's great to see a TV movie capture the personalities of all the characters so well. Highly recommended movie and I'm so glad it's finally out on DVD, though I find the quality is hardly digital quality. But DVD is still a more enduring format than VHS and will most likely last longer.
46 people found this helpful

NorthbyNorthwestReviewed in the United States on October 23, 2007
5.0 out of 5 stars
Brilliant!
Verified purchase
Has anyone who has reviewed this film observed the moment in the film when Heathcliff, as an adult, gazes down at the entrance to the cave where he and Cathy played together as children, and sees Cathy as a child? At the same moment, Cathy turns up to see his adult figure silouetted against the Sun. For one almost imperceptable moment, they see each other across time. The addition of this scene to the film, not in the book, is a stroke of absolute genius! (Spoiler alert) And this film tells the entire story, including Heathcliff digging up Cathy's grave to hold her corpse in his arms - love that drives you insane. Brilliant film and story! Emily Bronte is truly a literary giant!
11 people found this helpful
See all reviews
Back to top
Get to Know Us
Make Money with Us
Amazon Payment Products
Let Us Help You
EnglishChoose a language for shopping. United StatesChoose a country/region for shopping.
© 1996-2022, Amazon.com, Inc. or its affiliates