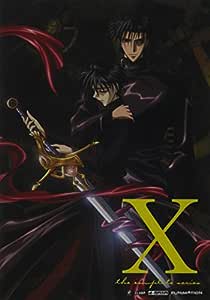 Kamui stands alone at the crossroads between salvation and Armageddon. Destiny demands that this tormented young man decide the fate of a world he no longer belongs in. Torn between rival orders of superhuman warriors, the time has come for Kamui to choose his side. Either he fights with the Dragons of Heaven – fights to save civilization and the two friends he swore to always protect, or he must draw swords alongside the Dragons of Earth and deliver a death blow to the human race. Whatever his choice, there will be consequences. Friends will change. Friends will die. Life will never be the same. There’s a last time for everything. That time is now.

4.7 out of 5 stars
4.7 out of 5
85 global ratings
How are ratings calculated?
To calculate the overall star rating and percentage breakdown by star, we don’t use a simple average. Instead, our system considers things like how recent a review is and if the reviewer bought the item on Amazon. It also analyzes reviews to verify trustworthiness.
Top reviews

Benjamin Sullivan
4.0 out of 5 stars Great, but missing an Episode?
Reviewed in the United States on June 11, 2018
Verified Purchase
A great way to see the complete version of an excellent series. Well, almost complete. I feel it necessary to inform anyone interested in this series that there exists an 'Episode 0' that served as an introduction to this series that I can watch on an earlier version of the first half of the series I previously owned. Normally, I might no5 mention it, but it seems in hindsight like a very important episode that is for some reason missing on this new version. So in short, great to be able to finish this series, but, if you can, YouTube (maybe?) Episode 0- An Omen, and watch that first or something. Its a really great episode that sets the tone for the whole series. Good luck!
Read more
7 people found this helpful
Helpful
Comment Report abuse

Frankie D
5.0 out of 5 stars X is a major hit!!!
Reviewed in the United States on August 19, 2015
Verified Purchase
This is a very good series. Loved it. 7 Angels of Earth v. the 7 Angels of Heaven. Both groups want the person that will be the major factor in there battle. One group wants to save the world and the other wants to destroy it. Series goes in depth into most of the Angels on both sides and there backstories. Some have personal issues with each other and others have feelings. A good story and pretty good fight. Series is light where as the movie was very dark and rushed. Ending was ok but a series that is worth seeing and getting. One of the best anime series ever made!!
Read more
5 people found this helpful
Helpful
Comment Report abuse

Tisha Petty
4.0 out of 5 stars Series follows the life of Kamui who is destined to save the world.
Reviewed in the United States on March 14, 2019
Verified Purchase
Bought because I own the movie.
Read more
3 people found this helpful
Helpful
Comment Report abuse

ramsey
5.0 out of 5 stars Five Stars
Reviewed in the United States on May 17, 2018
Verified Purchase
An anime fan must own....
Read more
2 people found this helpful
Helpful
Comment Report abuse

Kris
5.0 out of 5 stars Battle for the end of the world
Reviewed in the United States on October 9, 2013
Verified Purchase
Will you decide to save the world as it is or start a revolution to end the world? That is the premise of this show. This series is kind of like Fate Stay Night or Future Diary in the fact that there is a large battle against many interesting characters that may end the world as we know it. There are two groups of seven people that fight against each other to determine the world's fate. There is a lot more to this show than just fighting. This is probably one of the only shows that I have ever seen where all the characters backstories and motivations are revealed. This show makes you even sympathetic towards the bad guys, and that is something that can be quite difficult to accomplish. It also helps that everyone in the series looks very pretty, much like Code Geass.

This series begins with a young man named Kamui Shirô, who returns to his former hometown and meets up with his childhood friends, Fûma Monou and his sister, Kotori. Kamui does not want to be involved with them again out of fear that they would be hurt in the upcoming battles in the series. He is joined by a group of friends, who like Kamui, are also spiritualists, and wield incredible powers.

This series was done by Clamp, who have also worked on anime such as Rayearth and Chobits. The characters should look familiar to fans of Clamp, and if you are a fan, you definitely have seen or read this series. It is true that the manga is unfinished, but the anime certainly has an ending. And I mean an actual ending, not an anime ending where it just leaves the viewer hanging. The director is Yoshiaki Kawajiri, who directed Ninja Scroll and Vampire Hunter D: Bloodlust. When I heard that he was director, I immediately purchased this series; he's that good.

There is also a movie of X as well. The movie is way too short to accompany all the characters, and is downright violent towards the characters. The final battle of the movie made me feel so bad to the loser of the battle, unlike the series, which has an ending I can totally accept. The movie was also made before the series, and looks worse than the series, ironically. Do not watch the movie; it just is completely inferior to the series. Also, the English dub for the movie is completely different than the series. The characters voices do not match up at all, and are absolutely terrible. Speaking of the English dub, it is really good in the series. Anime veterans like Wendee Lee, Steven Blum, and Crispin Freeman are in this show.

This collection is rereleased from the Pioneer license, and is now under Funimation's label. All 24 episodes are included in this collection, as well as the OVA episode, which is on the final disc. Overall, this is an exceptionally good series, and you get to feel the characters' emotions. Also, there is implied boy's love, so be careful if you are against that, but the characters are way too pretty to object against it anyways.
Read more
4 people found this helpful
Helpful
Comment Report abuse

Guy Greybird
5.0 out of 5 stars Five Stars
Reviewed in the United Kingdom on July 8, 2014
Verified Purchase
Worth a look. Also worth watching the movie version as an alternate take on it. Very different!
Read more
Report abuse