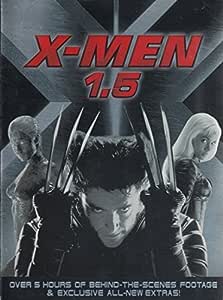 Secure transaction
Your transaction is secure
We work hard to protect your security and privacy. Our payment security system encrypts your information during transmission. We don’t share your credit card details with third-party sellers, and we don’t sell your information to others. Learn more
Details
Ships from
streetlight_records
Sold by
streetlight_records
Return policy: This item is returnable
You may be charged a restocking fee upto 50% of item's price for used or damaged returns and upto 100% for materially different item.
Read full return policy
New & Used (105) from
$4.99 & FREE Shipping

Don't just relive the spectacular action... take it to the extreme with this all-new 2-Disc Collector's Edition release of X-Men, packed with hours of never-before-seen bonus features! Go beyond the movie with the Enhanced Viewing Mode, incorporating more than 60 extra minutes of deleted scenes and behind-the-scenes footage as you watch the film. Listen to in-depth audio commentary from director Bryan Singer. Learn all the most revealing production secrets, from Casting and Costumes to Scenery and Special Eftects, through brand-new featurettes. And get an exclusive sneak peek at the making of X2. This is X-Men like you've never seen experienced it before!

4.4 out of 5 stars
4.4 out of 5
171 global ratings
How are ratings calculated?
To calculate the overall star rating and percentage breakdown by star, we don’t use a simple average. Instead, our system considers things like how recent a review is and if the reviewer bought the item on Amazon. It also analyzes reviews to verify trustworthiness.
Top reviews

R. J Rey
5.0 out of 5 stars Mutant Make-Over
Reviewed in the United States on March 11, 2003
Verified Purchase
Director Bryan Singer (The Usual Suspects) brings about the world of the popular Marvel Comic's heroes in the stunning comic book adaptation "X-Men". In a world filled with fear and prejudice, the rise of genetically enhanced beings has created a "mutant" scare among humans. Under the leadership of Professor Charles Xavier (Patrick Stewart), a group of mutant outcasts with amazing powers known as the X-Men, protect the humans who fear them from the powerful Magneto (Ian McKellen) who unleashes a sinister plan against all humans. Based on the popular Marvel comics, "X-Men" is an exciting and visually dazzling joyride with extraordinary characters and great special effects. The solid and creative storyline and some realistic human tension sets this movie higher than previous campy superhero action films. Patrick Stewart, Famke Janssen, James Marsden, Halle Berry and Anna Paquin not only look the part but also act out their heroic characters perfectly. Hugh Jackman's performance as rugged Wolverine is just one of the movie's highlights.

With the upcoming sequel just a few months away, Fox re-release the original comic book blockbuster in a surprising 2-disc special edition DVD. Like the previous DVD, the comic book movie is presented in a THX certified 2.35:1 widescreen format. The picture quality is the same but it's still a fine transfer with great sharpness and detail. The Dolby Digital 5.1 sound is great but it's the DTS audio option that really delivers. Fans who weren't please with the first release, will be impressed with the special features of "X-Men 1.5". It includes behind-the-scenes featurettes, commentaries, trailers and a look of the upcoming X2 (Sorry, no hidden Spider-Man clip or DVD-ROM extras). The animated menus are bright and quite appealing. Overall, "X-Men 1.5" scores an "A-".
Read more
4 people found this helpful
Helpful
Report abuse

Legal Mind
5.0 out of 5 stars Great first movie rendition of a comic!
Reviewed in the United States on July 11, 2006
Verified Purchase
I couldn't wait for this movie to hit the theaters. Likewise, I could wait to pick up the DVD. There are only a few criticisms to make if you, like me, grew up reading the X-men comics. For one, unlike their comic book superhero characters, the women (in particular, Storm and Jean) are much too weak. While on the flip side, traditionally weak characters like the Toad are made into formidable enemies with powers they never had in the comics. Although there is a real effort to make up for that in the sequels, it stood out in this one. For another, while many of the truly evil characters in the comics are loners with their own agenda, everyone unites under the leadership of the misguided Magneto in the movie (a sad fact that is not corrected in the sequels). Other than that (there are others but I won't bore you with the details), there are the small liberties with character profiles that one should expect when any piece of literature is brought to the big screen - like Rouge and Ice Man as teenagers instead of adults. Nevertheless, overall the movie is a great one in that it is a firs of its kind.
Read more
3 people found this helpful
Helpful
Report abuse

Jacopo
5.0 out of 5 stars An excellent adaptation
Reviewed in the United States on December 4, 2003
Verified Purchase
In addition to Batman and X2, this is one of the only film adaptations to remain true to the comic, while also producing an excellent film. Although I can't stand Bryan Singer, he did an incredible job directing this film. Fans of the Marvel Series won't be dissapointed that all of their favorite mutants are included, and the characters are developed fairly well, given that this is a difficult task to do with so many characters.
The 1.5 DVD is a must, even if you already own the original DVD. The extra features on the bonus disc are well worth the extra cost. This thing is packed with featurettes, commentaries, and is really entertaining to watch. If you're a fan of the comic book, you'll love the bonus features on the DVD.
Read more
Helpful
Report abuse

JW tucson
5.0 out of 5 stars Great movie
Reviewed in the United States on January 6, 2017
Verified Purchase
This is an absolutely fantastic movie. It's funny, it's entertaining and it's a movie that you would want to watch over and over again. Highly recommend it you will not be disappointed!
Read more
Helpful
Report abuse

Kalynda C. Smith
4.0 out of 5 stars Great!
Reviewed in the United States on February 23, 2006
Verified Purchase
As a fan of the X-Men cartoon, I felt like this movie was a great adaptation. Most of the changes weren't at all disappointing and completely understandable. Singer even made jokes of some them, which were greatly appreciated. The one thing I felt could have been done better: the casting. Though Patrick Stewart and Hugh Jackman were perfect as Professor X and Wolverine, I think that Halle Berry as Storm and Famke Janssen as Jean Gray fell a bit short. Ian McKellan was another excellent choice as Magneto, however James Marsden as Cyclops just shows you how boring the character really is altogether. Despite casting troubles, I think that this is a great movie that's definitely worth owning and is a great first go at the X-Men movie franchise.
Read more
2 people found this helpful
Helpful
Report abuse

Mat Van Gogh
4.0 out of 5 stars good
Reviewed in the United States on March 6, 2013
Verified Purchase
Not as fun as X2. but still a good film, They needed to get thier feet wet.
Recommended

If anyone has any questions about this please don't be afraid to ask me. I'd be more than happy to answer any and all of them.
Read more
Helpful
Report abuse

Ced.
5.0 out of 5 stars Came perfect, undamaged
Reviewed in the United States on November 3, 2015
Verified Purchase
Came perfect, undamaged, and complete with free movie tickets to see Daredevil or X2 in theaters...apparently these DVDs are still hanging around from 2003..Also the reflective cover art was recreated for the Days of Future Past Rogue Cut DVDs, so that's a really cute detail. The Fantastic 4 stuff in the picture is not on the actual case.Great Buy!
Read more
Helpful
Report abuse

M. Kivlehen
3.0 out of 5 stars Good, but nothing great
Reviewed in the United States on June 26, 2003
Verified Purchase
Being a fan of the Xmen I expected better. The movie was good, even though it was a bit slow. The extra's were just ok. I found myself getting bored quit easily. If your a hardcore fan get this. If not, don't bother with it..
Read more
One person found this helpful
Helpful
Report abuse
See all reviews

Frank McVie
5.0 out of 5 stars LOVE IT
Reviewed in the United Kingdom on September 29, 2015
Verified Purchase
Love it, old one was bashed, was surprised you still could buy brand new ones
Read more
Report abuse

Page 1 of 1 Start overPage 1 of 1
Previous page
Next page
Pages with related products. See and discover other items: hugh jackman, anna paquin movies
Back to top
Get to Know Us
Make Money with Us
Amazon Payment Products
Let Us Help You
EnglishChoose a language for shopping. United StatesChoose a country/region for shopping.
© 1996-2021, Amazon.com, Inc. or its affiliates