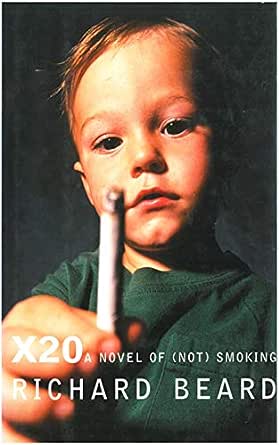 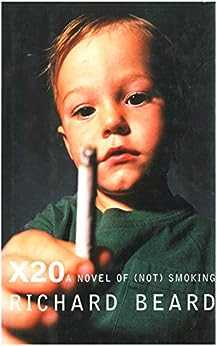 X20: A Novel of (Not) Smoking Kindle Edition

At 30, Gregory Simpson, son of a tobacconist and member of the smokers-only Suicide Club, decides to kick the habit. The incentives are all there, beginning with the prospect of living longer than his dead cigarette f(r)iend, Theo. On the other hand, what is he to do with his hands, his anger, and 104-year-old Walter, who keeps knocking over his ashtrays? Worse, how will the Company--which has financed his addiction and monitored his surprisingly good health--react? Writing a memoir (in which nicotine and smoke have the largest part) might quell Gregory's craving, keep his hands occupied, and put off mortality: "I have a vague but insistent memory of Miss Bryant in English Composition teaching us that the narrator can never die. That if the narrator died at the end of the story, then how could he possibly tell it?" He hopes she's right. On the other hand, someone asks him, "If you took up writing to give up smoking, how are you going to give up writing?"

This playful first novel is full of elegant observations about the rituals of tobacco and of another equally important addiction: love. For Gregory, foreign films have hopelessly intertwined sex and smoke. His first girlfriend takes him to a series "where a sign in the toilet said No Smoking Rauchen Verboten Ne Pas Fumer Non Fumare while the screen filled with unrepentant images of the twentieth century's most proficient smokers.... I saw nobody die of lung cancer, not on screen. Nobody even coughed or had a sore throat, except perhaps Marlene Dietrich."

Intercutting present woes and nicotine nostalgia, Richard Beard has fashioned a hyperimaginative and moving novel of obsession. Louis MacNeice famously remarked of Auden, "Everything he touches turns to cigarettes," and the same can be said for most of X20's characters, down to Bananas the cat. Bananas's desire is so great that he ends up with his own tobacco pouch, which he carries with him from living room to laboratory: "It was a long time since he'd been satisfied with the delicate inhalation of ambient air above ashtrays." --This text refers to an out of print or unavailable edition of this title.

Gregory Simpson is trying to quit smoking. Every time he feels the urge to smoke, he takes pen in hand and writes something instead. His story is told in fits and starts, without regard to chronology or geography. This creates a jittery series of vignettes from which the reader must piece together how Gregory started smoking and what made him stop. A series of characters including members of the Suicide Smokers Club, the LUNG antismoking activists, and a tobacco-addicted dog and cat populate Gregory's writing. The ghost of his friend Theo, recently dead of lung cancer, finally convinces Gregory that there is life after cigarettes. Published to coincide with the annual Great American Smokeout on November 20, 1997, this first novel is difficult but entertaining reading.?Joanna M. Burkhardt, Univ. of Rhode Island Coll. of Continuing Education Lib., Providence
Copyright 1997 Reed Business Information, Inc. --This text refers to an out of print or unavailable edition of this title.

Beard has written a series of variations on smoking and not smoking, on starting up and giving up, on addiction and social reprobation, on the merciful pleasures and the merciless price. It is a play of wit and pain, a novel of ideas as a succession of comic and touching skits, a series of entrancing cape passes with the sword concealed and each character alternating as bullfighter and bull. -- The Los Angeles Times Sunday Book Review, Richard Eder --This text refers to an out of print or unavailable edition of this title.

Debut British novel about smoking (or not) that's a long nicotine fit gasping for a more smooth-flavored, high-tar story. To occupy his hands over a 20-day period of not smoking, Gregory Simpson writes 20 patchwork chapters rather than play with little paper tubes. Among his pains is the loss of the post-coital cigarette--his girlfriend Lucy informs him that for her smoking and not smoking is the difference between entry and no entry. Meanwhile, Gregory's next-door neighbor and best friend, tobacco researcher Dr. Julian Carr, phones, saying nothing, just to let Gregory listen to him smoke. Lucy herself often pops over to Julian's for a smoke . . . and whatever. She tries all manner of devices to get Gregory to inhale but at last leaves him when--after giving him her body--he refuses to join her in the p-c smoke. To forget her, Gregory goes off to Paris, gets a job in a library, and meets Ginny, a budding American opera singer who keeps her lungs pure for the art. Ginny is jealous of Gregory's ex-girlfriend, though, thinks only of him kissing Lucy's smoke-filled mouth and tarry lips, and at last smokes a cigarette to seduce the reluctant Gregory. He finally leaves her, however, and returns to London. Much of the novel concerns tobacco research by Gregory's close friends, a pair of doctors. Gregory, who once led the Suicide Club, valiant smokers aligned against LUNG antismokers, figures that during the next ten years of not smoking a pack a day he will not smoke 73,057 cigarettes (365 x 20 x 10), which includes two packs for leap years (20 x 2). Also in withdrawal, his dog Haemoglobin whines for dirty ashtrays and secondhand smoke. Very witty but utterly endless, like The Magic Mountain by S.J. Perelman. -- Copyright ©1997, Kirkus Associates, LP. All rights reserved. --This text refers to an out of print or unavailable edition of this title.

Richard Beard was born in 1967. X20 is his first novel. --This text refers to an alternate kindle_edition edition.
Read more

milhousetv@mailcity.com
4.0 out of 5 stars An excellent first effort
Reviewed in the United States on April 13, 1999
An author's first novel will set the tone of his career. Therefore, the career of Richard Beard is one that I shall be following. In "X20", Beard involves the reader with a host of characters. He has shown the ability to give depth to his subjects, and allow them to grow throughout the novel.
This book does seem to start off with a noticeable lack of focus. The author tells the story from a several different points in time, jumping back and forth between periods in his life. Hearing the story from the start and the finish concurrently can be a little overwhelming at first, but that is soon remedied. By the end of the book, I was wishing that there were more cigarettes in a pack. This is a very worthy read for smokers and non-smokers alike.

Karin S. Chenowith
5.0 out of 5 stars SMOKING good book... har har
Reviewed in the United States on February 8, 2004
loved this book- best book i've read in quite awhile. one of those books for which you try to SLOW DOWN your reading in order to put off the inevitable end. highly highly recommend. i'm back today trawling for anything else he may have written since this one... :)
Read more
Helpful
Comment Report abuse

Amazon Customer
5.0 out of 5 stars Addicted to Association
Reviewed in the United States on October 15, 2001
More than a book about smoking, Beard's character finds himself addicted to memories, lust, love and companionship. Living in a world he can't really get into, but can't give up.
The book is written in the style of a man trying to give up smoking, writing entries to keep his hands busy and the length of the entries as well as thier content, show the withdraw. The main characters life unravels through these entries as well which give it a nice touch. At times witty, at times rather morbid, this book is a great read. Though I don't like this edition's cover art... cough, cough...
Read more
One person found this helpful
Helpful
Comment Report abuse

lecoyte
5.0 out of 5 stars Not a book about giving up smoking
Reviewed in the United States on April 20, 2004
This is a cleverly written book, WITHOUT Beard trying to outsmart the reader. For example note the names of the characters. Great. This was so readable, I too could not put it down. This book I swear, energized me. I felt better for reading it. What better thing can you say.
Adrian
Read more
Helpful
Comment Report abuse
See all reviews from the United States